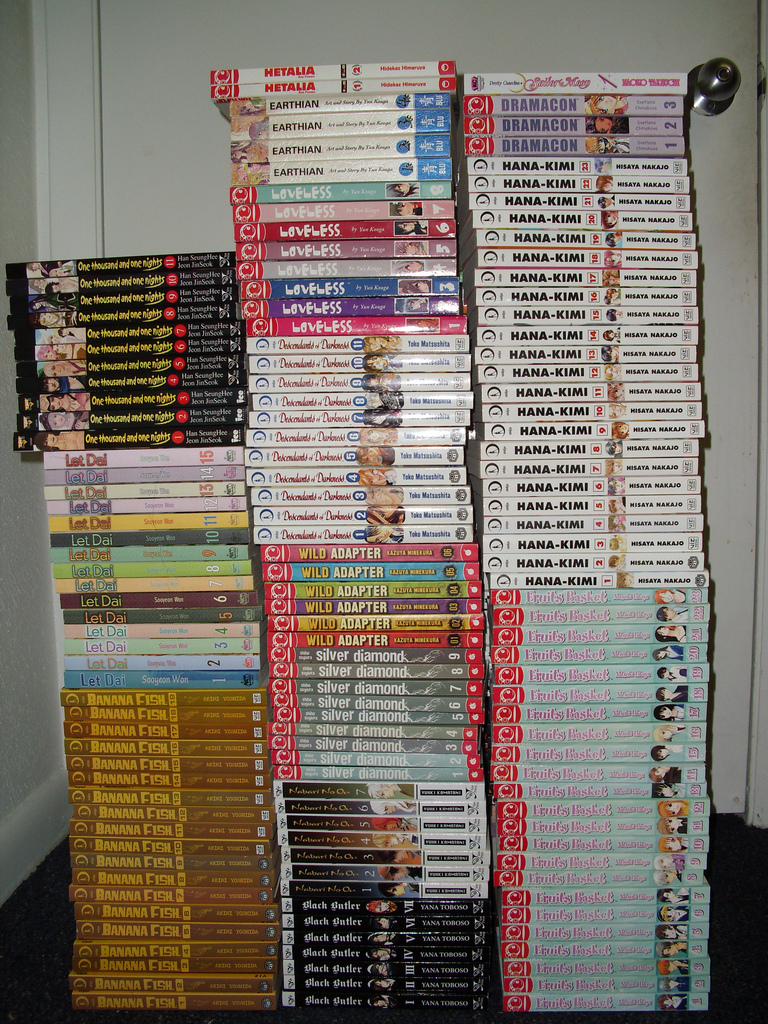 Welcome to the latest installment of Show Us Your Stuff! Today’s contributor is Myrah, an educator-in-training who’s passionate about books, baking, and CLAMP. Her collection is modest but catholic, and includes some rare Antique Bakery doujinshi. Here’s what this very busy woman had to say about her growing manga library.

Hello! I’m an undergraduate working on a major in English and minors in Education and Asian Studies. I’ve always enjoyed reading and writing and I’ve wanted to be a teacher for as long as I can remember. My decision to pursue Asian Studies is a more recent thing, partly influenced by my love for manga, and partly by my general interest in World History. I’m working on my Chinese and will hopefully study abroad in China for a semester in the near future.

I don’t have much free time between class and working as a teacher’s aide, but when I do I like to bake yummy things, ride my bike, and pet my cats. Besides my manga collection, I also have a rather large library of novels, anthologies, plays, non-fiction, and other graphic novels. Simply put, I love books!

What was your first manga?
That would be Sailor Moon, which is kind of strange because I never saw the anime. My sister (who doesn’t like books, let alone manga) borrowed the first few volumes from a girl on her school bus, and since I read everything I came across back then, I gobbled them up. I wound up buying most of the series, but sadly sold it years ago. I was very happy to hear Kodansha would be re-releasing it. (But I still haven’t seen the anime…)

Who is your favorite manga-ka?
From a critical stand-point, I would go with Fumi Yoshinaga. She is like a goddess to me. But as a fan, I’m going to have to say CLAMP. Sure, they’ve disappointed me on several occasions, but I just seem to keep coming back to them. CLAMP definitely aren’t the best storytellers out there, but those ladies are very good at crafting characters that I get emotionally invested in. I also really love that they can do so many different kinds of series and yet stay true to themselves. I always know a CLAMP work when I see it! 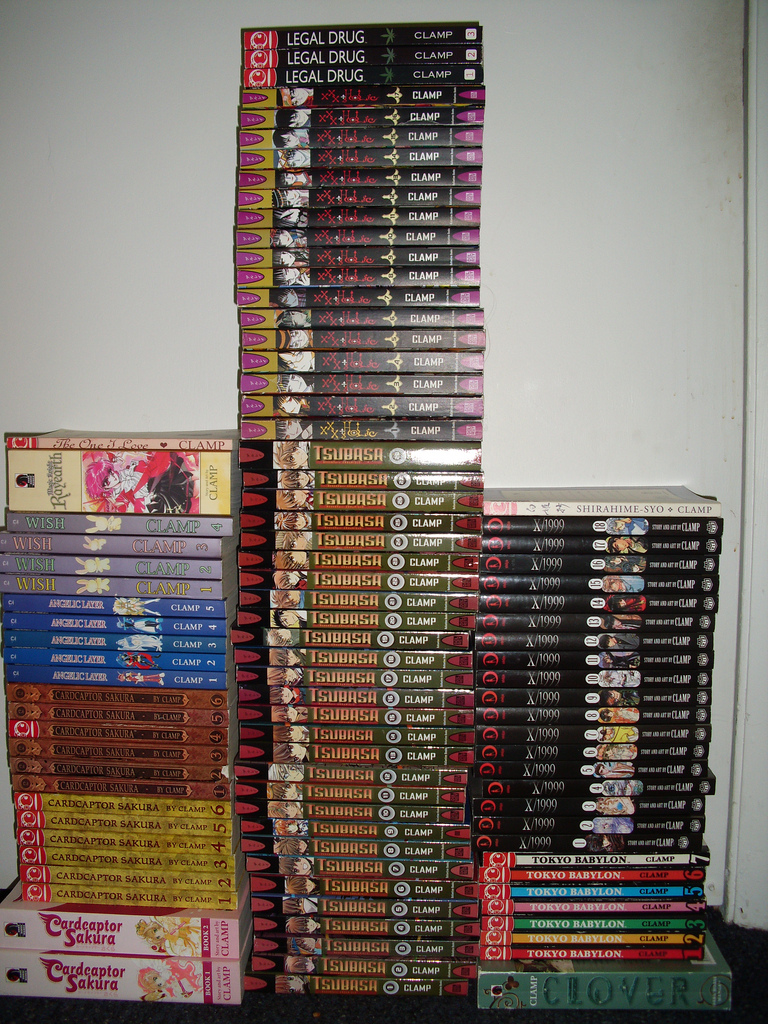 How long have you been collecting manga?
I have a poor memory, but I believe it has been four or five years now. During that time I have never had a steady form of income, so most of my purchases were funded by carefully saved change and bought secondhand. (I live near an amazing used bookstore! Amazon Marketplace, eBay, and Garage Sale Japan on livejournal are all also awesome.) Recently I have been able to afford buying new books, but I’m still a total penny pincher and love scoring good deals.

What is your favorite series?
Easy: Fullmetal Alchemist! I own the complete runs of the two anime series and the full soundtracks for both, but the manga is what I fell in love with first and still owns my eternal devotion. FMA is the one series that I recommend to everybody, no matter their tastes or prior experience with manga. For me, it is one of the greatest stories ever told– a true epic! FMA is also my favorite series for nostalgic reasons– it was the third manga series I read, but it was the one that made me really get into manga and think of it as something I could take pride in reading rather than just being a guilty pleasure.

How big is your collection?
At last count, I have about 430 volumes, but it’s a kind of fuzzy number thanks to omnibuses and the fact that I’m constantly buying and selling manga. I get more manga every month though, since I try to keep up with new releases I’m interested in.

What is the rarest item in your collection?
The rarest books in my collection are also the two I’ve spent the most money on: Antique Bakery doujinshi by Fumi Yoshinaga herself! They’re a sort of unofficial continuation of the series, taking the four main characters in the directions Yoshinaga saw them going in. I spent about $85 for the pair of them and each is only 42 pages. They are 6 and 7 out of a set of 12 (I think?) and I’d like to get the rest but my checking account would never forgive me. 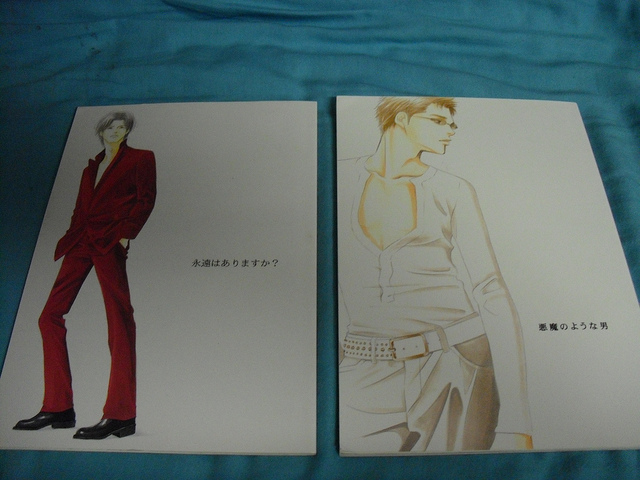 Antique Bakery doujinshi. (left) Eien Wa Arimasu Ka? / Is There Such a Thing as Forever? (right) Akuma No Youna Otoko / A Man Like the Devil 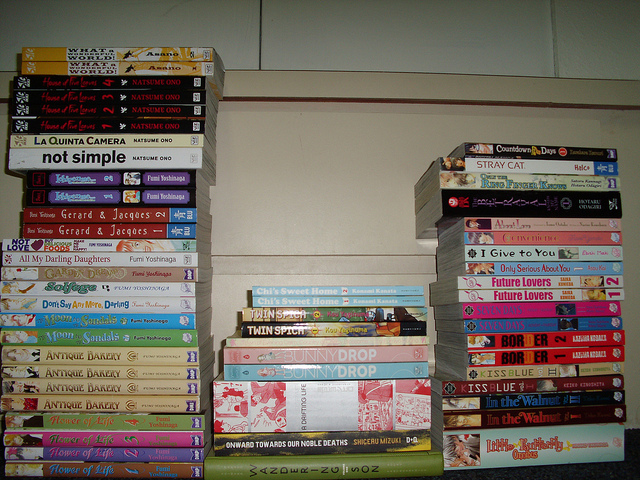 What is the weirdest item in your collection?
I don’t have anything that is particularly out of place… probably the weirdest manga I have according to content would be Cromartie High School. 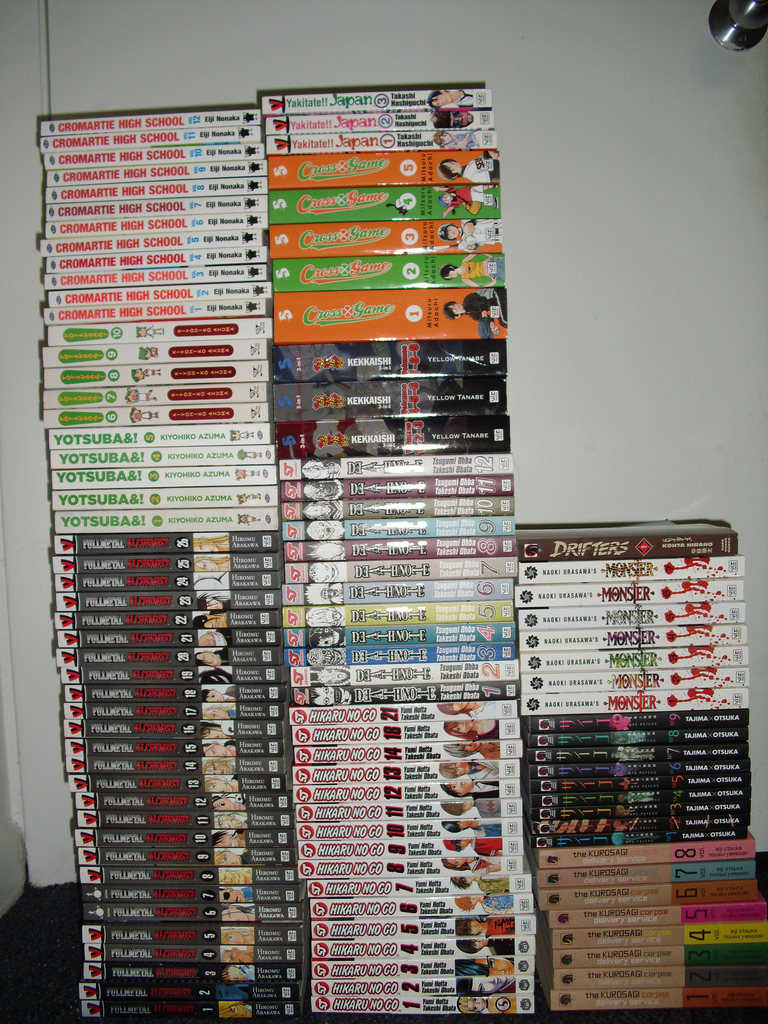 Do you have any organizational tips you want to share with other readers?
Well… don’t keep your manga on the floor for one thing! Shelves are a worthy investment, but I simply don’t have the space in my dorm. I maintain an inventory of what I own, what condition it is in, and who I loaned what to so that I don’t lose track of anything. Once a collection gets past 200 volumes, an inventory pretty much becomes a necessity, in my opinion. I keep my manga sorted into four rough categories: CLAMP, manly series, series of questionable manliness, and everything else. I try not to let my collection skew too far into one direction, but it’s pretty obvious that I have a penchant for BL. Most importantly, keep your manga in a place where you can smile at it! There’s nothing sadder than pretty books tucked away in a corner.