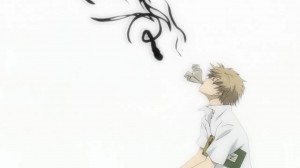 Natsume’s Book of Friends is the kind of series that could only be made in Japan. The same plot set-up (young man learns about demons and ghosts, fights some of them and saves others, befriends a supernatural guardian and learns more about his family and himself) when worked over by the United States, well, became Supernatural. Natsume, on the other hand, is a feel-good, low-key series that would gladly eschew demon-slaying for a chance to show an autumn festival in full sway. Less “monster of the week” and more slice-of-life, Natsume’s Book of Friends’ first season tries to bite off more story than it can chew and ultimately left me wavering between dissatisfaction and well-meaning sentimentality.

The eponymous Natsume is a high school boy named Takashi, who has spent his life being ostracized by his family and peers for seeing ayakashi — monsters that are an intersection of mythical beast, ghost, and evil spirit. Takashi’s grandmother Reiko Natsume left him her belongings, among which is the Book of Friends: an old-fashioned notebook filled with names of ayakashi that Reiko had made her followers. The ayakashi whose names were bound in the book were forced to obey Reiko’s commands and, as we discover later in the series, were often Reiko’s only companions.

But Natsume (Takashi)’s connection with the Book of Friends is different. He’s not interested in getting more names; rather, he wants to return the names to the ayakashi. It’s a grueling process that physically and spirtually taxes him. Guided by Nyanko, a dog demon named Madara stuck in the body of fat cat, Natsume finds himself navigating the tricky waters of interpersonal relationships, both with the humans in his life, the ayakashi who won’t leave him alone, and the ayakashi who, surprisingly, need him to guide them through the world of human feelings.

When Natsume’s Book of Friends does its job well, the stories are truly touching. Tsubame, the sparrow ayakashi of episode six, was for me the early standout in this thirteen episode series. Her story arc marks the first time that Natsume gets overly involved in the plight of an ayakashi to his detriment. In his desire to get Tsubame a chance to see the human she loves, Natsume gets trampled on, pushed around, and almost eaten. It’s the kind of dedication that in other anime would result in a love confession. Here, Natsume’s feelings for Tsubame are deliciously kept in the dark, and paired with Tsubame’s unrequited love for a passing human, the whole episode reads bittersweet and touching. Likewise, Hotaru from episode eight has the same melancholy, literary feel to her character arc, much like a short story from Yasunari Kawabata, but animated. At its best, Natsume’s Book of Friends knows when to play the emotional cards close to heart; the most interesting character relationships tended to be the ones that were neither labeled nor even mentioned by anyone in the series. 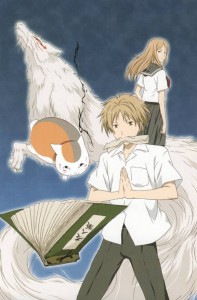 But other ayakashi who cross Natsume’s path sometimes seemed downright contrived. The kitsune — fox spirit — whose mother is now a pile of rocks (?) had promise as a loner who aims to befriend Natsume, but instead that story fizzled out into a relatively lukewarm conclusion that had me wondering why I was supposed to remember the kitsune kid when he chose to show up in a later episode. Episode three with the dew god was clearly an early foray into the rustic faith of the countryside, but the really interesting religious question (how can you be a god if you have no powers and no followers?) was passed up without any commentary or exploration, while a passable but ultimately silly love story was chosen to cap off the episode. Let’s not even get into the confused emotional climax of episode five, whose musing about friendship between the ayakashi and ill-fated attempt to show us more about Reiko’s personality had me literally falling asleep, despite my best efforts to stay interested. None of the characters in the first season, besides Natsume, get much depth. Sasada, the homeroom president, and Tanuma, one of the few other people who can see ayakashi, had potential to be great foils for Natsume. Instead, Tanuma languishes as a barely realized ally whom Natsume only manages to reach out to in the last episode, and Sasada goes from possibly-no-wait-maybe-not love interest to laughing stock.

In general I found the manga to be more melancholy and on point with the emotional cues. Natsume himself is more gloomy and isolated in the manga, while in the anime, he seems shockingly well-adjusted, making a major sticking point of the story — Natsume’s attempt to build interpersonal relationships — harder to swallow in the anime. Often the anime seemed to be trying too hard for zany or cute or melodramatic or something. I don’t know if it’s because of the switch in medium, but the manga chapters seemed to have an extra air of easy-going softness that was missing from the anime. In many ways, the manga version of Natsume’s life was incredibly fragile. You felt the stories were just like Tanuma’s view of the ayakashi, like if you scrutinized the stories too much they would disappear a little into the background of Natsume’s life. Not so with the anime, where things felt more grounded, more real. Natsume didn’t seem to be the lonely, slightly withdrawn young man he was under Midorikawa’s pen; instead, you felt strongly in the anime that everyone else had had to be wrong to doubt a boy like Natsume. The world of manga Natsume seemed more Japanese, and the ayakashi were everywhere, not just the guest characters they so often were in the anime.

Yet the anime does have its advantages. The ending theme, “Summer Evening Sky”, is a perfect enka-inspired piece that always warms your heart whenever it starts to fade in during the last few minutes of an episode. Kazuhiko Inoue as Madara a.k.a. Nyanko-sensei is a force to behold, easily switching out of Nyanko’s whiny drawl and into Madara’s gruff, no-nonsense bark. And for all my griping that the secondary characters never get development, it’s still refreshing to see a show starring a male character that is neither testosterone-driven nor filled to the brim with ditzy and well-endowed love interests. 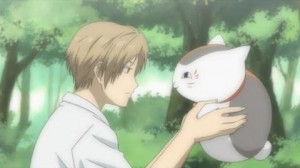 Fans of Mushishi and Yumekui Kenbun might consider giving Natsume’s Book of Friends a try (and likewise, those of you who enjoyed Natsume should check out those other two series!). At thirteen episodes, the first season is easy enough to swallow, and the episodic nature of the story arcs makes it easy to start and stop. As for me, I’d put Natsume’s Book of Friends in the box of anime series that neither wow nor disappoint. And, of course, I can only hope the subsequent seasons of the anime learn from Mushishi rather than Supernatural.

Watch it streaming at Crunchyroll