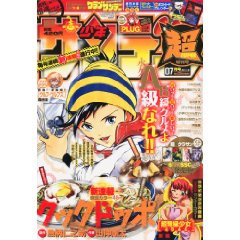 Welcome to the newly named Magazine no Mori, where I will try to guide you through the dark tangled forest of Japanese Manga magazines and, hopefully, we’ll discover some wondrous manga truffles along the way. (Was that pushing the metaphor a little too far? I think it might have been.)

As much as I consume a ridiculous amount of manga and of manga magazines, my tastes run to the fringes of all typical categories of manga. Of shounen, shoujo, seinen and josei, the manga I read the least is the most popular – the shounen.

So it was some suprise to me that Shounen Sunday really is all that and a bag of chips.^_^

Of course I had heard of Shounen Sunday. I just hadn’t ever given it any thought. When I finally cracked the covers, I was instantly greeted by series that I, and you, will be familiar with.

And, oh, what you are spending those cents on! The names that write for Shounen Sunday are, well, legendary. Prominent among them are Adachi Mitsuru (Asaoka Kouko Yakyuubu Nisshi), Takahashi Rumiko (Rinne), Watase Yuu (Arata Kangatari ~Engaku Kougatari~). These run alongside series that are probably better known over here by title than by their creators’ names, such as Takashi Shiina’s Zettai Karen Children, Hata Kenjiro’s Hayate no Gotoku (known in the west as Hayate the Combat Butler), Wakaki Tamiki’s Kami nomi zo Shiru Sekai (known as The World Only God Knows) and Aoyama Gosho’s Detective Conan (known here as Case Closed).

Weekly Shounen Sunday has a website in Japanese with news, interviews and “backstage” with the manga artists, links to collected volumes, and other typical magazine “stuff.” In addition, Viz has an English-language site for “Shonen Sunday” where you can find downloads, creator profiles and series synopses.

Despite the somewhat irksome persistence of misogynistic “service” (breast groping, nipples visible under clothes and crotch shots), this magazine is undoubtedly targeted to boys who plan on becoming immature man-boys in the future. I’d love to love Sunday, but it’s hard to see past the “Boys Only, Girlz Stay Away” sign on the treehouse door.

This is particularly frustrating, as Sunday’s pages are replete with very cool baseball, soccer and other non-dating sim-esque manga inside. If the service was notched back a few degrees, I might add this to my monthly rotation. As it is, I think I’ll pass.

As a box of chocolates, while there are a whole lot of caramel and peanut treats inside, there’s just a few too many yucky jellies for my taste. But your taste may vary. ^_^