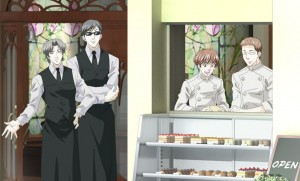 Antique Bakery has already been covered in wonderful reviews by the Manga Bookshelf regulars. It begins with Keiichirou Tachibana, the son of a rich family, quitting his salaryman job in order to open a cake shop. He buys out an antique shop that’s going out of business and hires a former classmate of his, Yusuke Ono, the black sheep of the pâtissier community. Along the way, they pick up ex-pro boxing champion Eiji Kanda, who is determined to become Ono’s apprentice, and also end up employing Tachibana’s childhood friend, Chikage Kobayakawa, as an incompetent waiter. Like last month’s House of Five Leaves, Antique Bakery is a story about forging families and learning to both shoulder and forget your past. Though Ono is technically Eiji’s teacher, they turn out to be more of a parental-child unit than anything else, and any fan of the series will tell you that there’s a funny yet tragic joke about Chikage’s daughter marrying Tachibana in the future, essentially making Chikage Tachibana’s “father”. Add in a tumultuous high school past between Tachibana and Ono, an are-they-or-aren’t-they relationship between Chikage and Ono, and more delicious cakes than you could possibly eat in a life time, and you have Antique Bakery.

Every good fan plays favorites. I’m not afraid to tell you that Fumi Yoshinaga is one of mine. Antique Bakery was one of the first series that I collected from beginning to end, back when DMP was still doing those wonderful large books with the slip covers. The Antique Bakery books came with scratch and sniff covers. I thought they were the bee’s knees. I still do. So it’s only natural that I went into Antique Bakery the anime wanting to like it.

Did the anime deliver? Well, I can’t say there’s really anything actually wrong with it. It follows the source material reasonably closely, it does its best to translate Yoshigana’s characteristic artwork into an animation style, and it’s consistent from beginning to end. Maybe the best thing is the voice acting. Keiji Fujiwara is exactly what Tachibana sounded like in my head when he uses his “badly put upon papa” voice. Eiji Hanawa’s Chikage is flawless from beginning to end, alternatively meek and manly. Mamoru Miyano was an inspired choice for Eiji’s exuberant, cheeky attitude, and Shinichirou Miki as Ono manages to effortlessly straddle all aspects of Ono’s contradictory personality. It’s a real treat to hear scenes where all four voice actors work together, especially in scenes where Ono manages to show off just how much he is the real boss of Antique, not Tachibana. 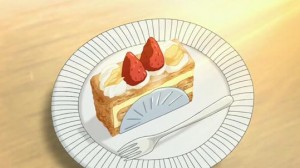 The real problem comes when you take apart how the anime has restructured the story. I don’t mind that the anime throws together all the employees relatively early (Chikage, for example, shows up in episode one even though he wasn’t introduced until volume two of the manga). But the first episode opens with Tachibana having a nightmare about his kidnapper, which takes away the shock value of learning that competent, put-together Tachibana actually had a traumatic childhood. From the very beginning, the threads of his kidnapping story are scattered everywhere. When Tachibana first discovers Ono’s “gay of demonic charm” in the manga, it was very much tied to his guilt for pushing Ono away and ruining Ono’s life. But in the anime, it somehow came all the way back to Tachibana’s unarticulated homophobia post-kidnapping.

Anime Tachibana is completely reduced down to his childhood trauma. Gone is his fondness for inventing overly dramatic and completely specious explanations for the behavior of the customers in the shop. Gone is the very telling scene where his family visits the shop and you realize the entire Tachibana family has a face reserved for dealing with the public. When we hear about his past girlfriends, it’s limited to the one in high school, so you never realize that Tachibana’s willingness to please is one of his virtues as well as one of his weaknesses.

The other characters suffer from similar abridgment. Eiji’s background as a hypersexual gang member teenager, reformed by a kindhearted boxing coach, has been completely wiped in the anime, so he’s ends up being only an overly enthusiastic sports-type with a heart of gold. While we are introduced to Haruka and Tamiko, the news anchors that come to interview the shop for a cake fair, we aren’t given their history, which like all things Yoshinaga is that wonderful blend of humor and commentary on gender in modern day Japan. Chikage never had much of a story in the first place, but most of the scenes showing his idiosyncratic, yet charming, way of interacting with the Antique customers have also been cut. And one of my favorite lines, where Ono displays his insight into the hearts of men by diffusing an argument between Eiji and Tachibana, never makes it into the anime. Most of Ono’s gay lifestyle, actually, never makes it into the anime.

The characters seem to be shallower reflections of their manga selves. In fact, the story as a whole seems to be a shallower version of the manga. For me, the beauty of Antique Bakery was that it was a slice of life series — iyashi-kei, if you will — which pretended for a while to be a drama about Tachibana’s past. In the end, though, it was all about how these four men, whether or not they mean to, are stuck together forever as a family. Even when Chikage moves out of Tachibana’s apartment, even when it’s only Tachibana and Ono in the store, they’re still a family, bound together by fate and their investment in each other’s lives.

But the anime should probably be renamed “Keiichirou Tachibana and the Never Ending Kidnapping Trauma”. Everything is subsumed into this one overarching theme. This defect is nowhere more obvious than in the ending. In the manga, the kidnapping plot is wrapped up, Eiji and Chikage leave the store, followed by Tachibana and Ono pretending to be a gay couple for some schoolgirl customers, and we end on Tachibana’s realization that, despite evidence to the contrary, he’s still not over his trauma. But the anime, bizarrely enough, starts with Tachibana’s realization that he isn’t okay after all, transition into Chikage’s, then Eiji’s, departure, and finally lets Tachibana face off his kidnapper. The flashback to Tachibana a child, running away from his kidnapper, worked in the manga as a faux-climax to the story, but contradicts anime Tachibana’s assertion that he isn’t cured. The sense of the store continuing on, despite all changes, has disappeared. We end where we began, alone with Tachibana. 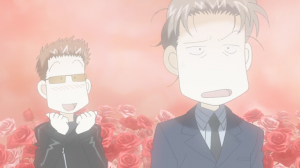 Finally, the animation leaves a lot to be desired. Fumi Yoshinaga’s art was never ornate or highly detailed, but when translated into an anime, it looks sadly flat. As if to compensate, the anime overuses CG art for the backgrounds, leaving you with the unsettling sense that you’re watching cutscenes from a late nineties video game. While abrupt transitions into super-deformed faces worked for the characters in the static medium of manga, their appearance in the anime verges on excessive and more than once took me completely out of the story. Like everything else in this anime, the animation isn’t terrible, but it definitely doesn’t do the series any favors, and it certainly didn’t take the story places where only the anime medium can go. I finished the anime with the uncomfortable feeling that it would have been better off with a studio like BONES, Studio Pierrot, or even Sunrise, which understood enough baking to make Yakitate!! Japan memorable. If a series like Genshiken found a way to parody cheesy BL storylines with French subtitles, you’d think a canonical cheesy BL storyline set in Paris would be played for laughs in Antique Bakery. Alas.

For completist fans, the DVD set is worth getting exclusively for the bonus booklet, which contains two enlightening interviews with Fumi Yoshinaga and the voice actors. The DVDs themselves are pretty bare, but the last DVD does include an adorable special where the voice actors are interviewed while wearing the outfits of the characters they play. On the other hand, if this is your first experience with the Antique gang, I have to say that you’re better off reading the manga than watching the anime. It’s not even that the anime is actually bad; it’s plenty enjoyable on a lazy Sunday afternoon, especially if you have a piece of cake on hand. But Fumi Yoshinaga’s work is so good that the anime was doomed to failure from the beginning. That’s the danger of playing favorites.

A million thanks to RightStuf for providing a copy of the DVD set for review.