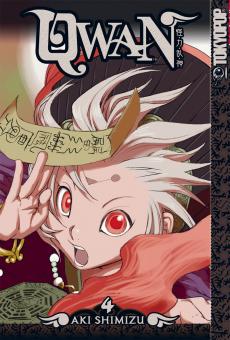 I have a bad habit of falling in love with commercially doomed series. Satsuma Gishiden, for one: Dark Horse published the first three volumes of this manly-man samurai manga, only to put the series on ice in 2007. Duck Prince, for another: Ai Morinaga’s awesomely weird comedy also bit the dust three volumes into its run, a victim of CPM’s perpetual cash flow problems.

I’m dedicating today’s column to another lost cause: Qwan, a fantasy-adventure that draws heavily on Chinese history and folklore for its inspiration. Between 2005 and 2007, Tokyopop released four volumes of what would eventually be a seven-volume series in Japan. After the English-language edition caught up with the Japanese, Qwan went on hiatus. The series never resumed production, however, leaving its few ardent fans stranded in the middle of a crucial story arc.

Normally, I shy away from recommending incomplete series; there’s nothing quite as frustrating as beginning a manga with the knowledge that you will never, ever know how the story ends. I’m going to recommend Qwan anyway, because the four volumes that were published are awesome — Scout’s honor.

The story focuses on Qwan, a child-like figure whose naivete and enthusiasm belie super-human strength and speed. Though Qwan realizes he isn’t human, he’s never questioned his origins or abilities — that is, until he meets Shaga, a courtesan who urges him to seek the Essential Arts of Peace, a sutra that will reveal where Qwan came from and why he was sent to live among humans. He’s not the only one who wants the sutra, however; various political factions vie for the scrolls, hoping to unlock the scrolls’ power and hasten the Han Dynasty’s demise.

Questing boys and magical scrolls are de rigeur in fantasy-adventure stories, but Qwan distinguishes itself in two crucial areas. The first: well-rounded characters. Qwan isn’t a classic Shonen Jump hero, kind-hearted and dedicated to self-improvement, but a more ambiguous figure; he’s guileless and self-centered in the manner of a nine- or ten-year-old, unable to feel genuine sympathy for others. Early in volume one, for example, Qwan encounters a mysterious girl traveling in the company of a demon. Daki proves more a formidable opponent than Qwan anticipates, successfully countering his attack with powerful insect magic. Though it’s clear to the reader that Daki, like Qwan, is a supernatural being, caught between the human and demon worlds, Qwan himself never sees the parallels between their situations, repeatedly attacking Daki until he resigns himself to the futility of his efforts.

The second distinguishing feature of Qwan is Aki Shimizu’s gorgeous artwork, which draws on anime, guo hua (classical Chinese painting), and wuxia films for its aesthetic. Though Shimizu usually blends these different styles into a seamless whole, she occasionally makes explicit, almost self-conscious quotations of her influences. In this panel, which appears in the very first chapter, she gracefully echoes the undulating lines and shapes of Chinese landscape paintings, even adding a delicately stylized pine tree in the foreground: 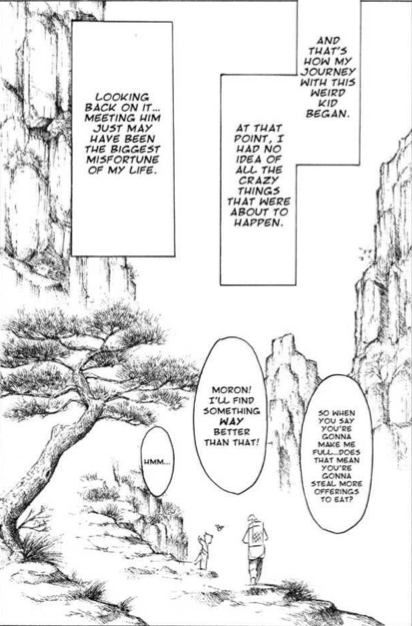 Her fight scenes, too, are steeped in Chinese influences. Using dramatic angles, she makes her characters look as weightless as the wire-fu acrobats in Curse of the Golden Flower and House of Flying Daggers; her fight scenes verge on ballet, beautifully choreographed sequences of tumbling bodies and arcing swords. In this sequence, for example, Qwan goes mano-a-mano with a tiger demon, eventually gaining the upper hand by vaulting onto the monster’s back: 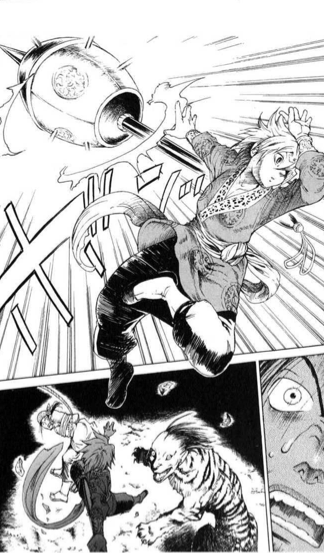 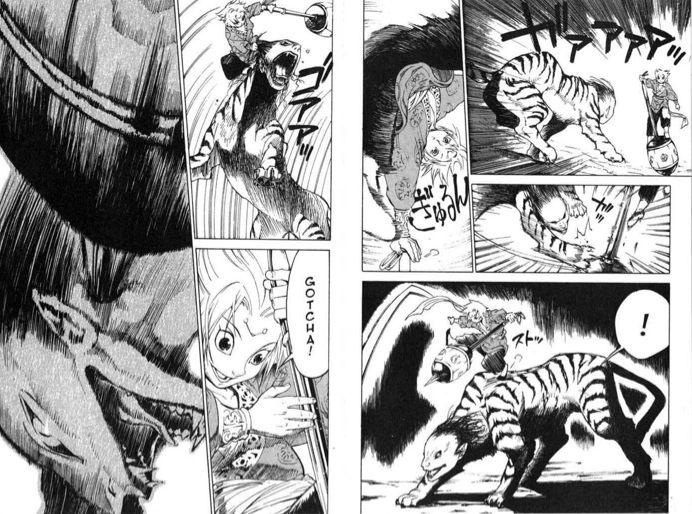 Qwan then consumes the demon at the end of their protracted battle, the demon’s body dissolving into an inky swirl: 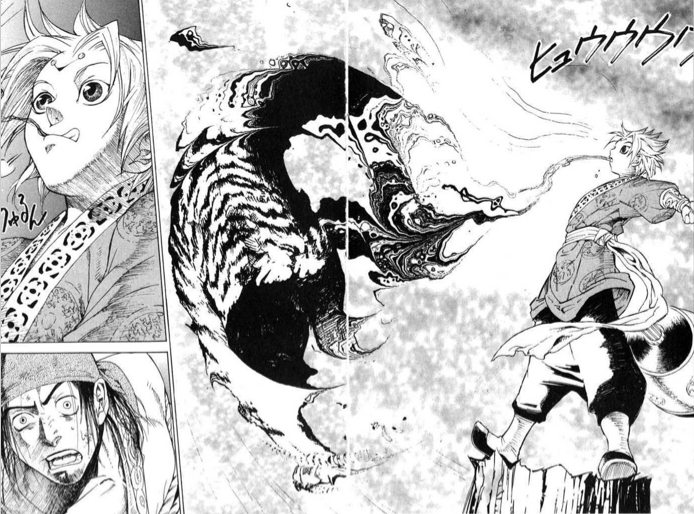 Oh, and Shimizu draws some pretty nifty monsters, too. This one suggests a Maltese-water buffalo hybrid with prehensile toes: 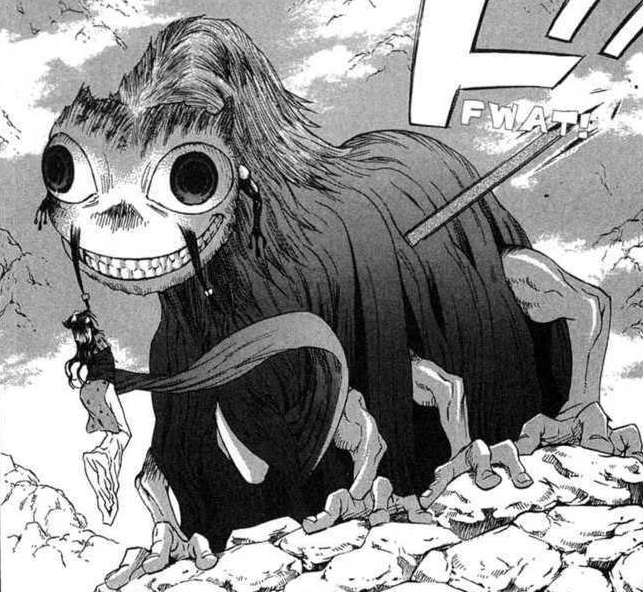 So why wasn’t Qwan a bigger hit? I think narrative complexity was a factor. Though the story is a rich tapestry of political history and myth, Shimizu refuses to spoon feed information to the reader; we’re just as confused and disoriented as Qwan himself is. That kind of reading experience can be quite rewarding, but the absence of an omniscient narrator demands more of the audience, forcing us to pore over the text and make connections on our own. Shimizu’s artwork and characterizations are up to the task, but impatient readers will easily miss crucial details in their haste to get to the fight scenes.

I also think timing was a factor: Qwan‘s fourth volume appeared in 2007, at the height of the manga boom. If you remember that heady period, publishers were releasing more than 1,200 new volumes of manga per year. Titles that didn’t have an obvious hook — say, a popular anime adaptation or a cast of hot male vampires — faced an uphill battle, with bookstores unwilling to continue stocking series whose first or second volumes sold poorly. With little support from the publisher, and few fans blogging about it, Qwan was all but consigned to the remainder bin.

I’m under no illusion that my paean to Qwan will save it from licensing purgatory; for every Yotsuba&!, there are two Tactics, manga that didn’t gain much traction even after a well-publicized rescue. But Qwan is so good that I can’t help but wish that someone will complete the series — perhaps in a digital-only format, or print-on-demand, or an author-sanctioned scanlation. It’s a manga for readers — for people who love great stories and vivid characters, who care more about the quality of the storytelling than the coolness of the concepts and costumes.