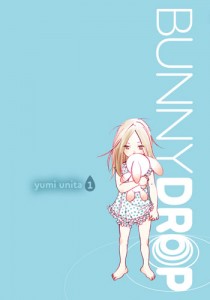 Fictional bachelor dads come in two flavors. The first is easily flummoxed by diapers, sippy cups, tantrums, and stomach aches, reacting in abject horror to bodily functions and extreme emotions (see Three Men and a Baby), while the second behaves more like a stand-up comedian than an engaged parent, commenting wryly on his charges’ behavior without doing much to guide or correct them (see Yotsuba&!). Daikichi, the singleton hero of Bunny Drop, is a pleasant corrective to these familiar stereotypes: he’s a sensitive, well-meaning thirty-year-old who steps up to the plate when his grandfather dies, leaving behind an illegitimate six-year-old daughter.

What begins as an impulsive decision — Daikichi is offended by his family’s reluctance to accept responsibility for gramps’ kid — quickly evolves into a serious commitment. Daikichi is humble enough to realize his limitations as a father, enlisting help from co-workers, friends, and family members in his efforts to find day care for Rin and impose some structure on her life, even though he isn’t entirely certain what kind of boundaries and routines are appropriate for a six-year-old. Yumi Unita wrings some humor out of Daikichi’s attempt to understand Rin’s unique point of view, but steers clear of easy laughs and easy victories. The early moments of rapport between Daikichi and Rin feel earned, not contrived, while Rin’s quirks reflect the bizarre circumstances of her early upbringing, as well as her deep fear of being abandoned.

Though Unita’s character designs are highly stylized and her panels free of busy detail, the spare, unfussy quality of her artwork is deceptive; her seemingly simple faces and bodies actually speak volumes about each character’s personality and history. The few lines on Daikichi’s face, for example, not only establish his age and his homeliness, they also give readers a window into his relationship with Rin. We see his growing attachment to the girl through the softening of his brow and jawline, and note the tension in his face when trying to negotiate new office hours for himself. (His co-workers are puzzled and angered by Daikichi’s decision to take care of Rin. “Just because it’s a relative’s child,” one underling complains, “why must you be the sacrifice, Kawachi-San?”)

With Rin, Unita focuses as much on the character’s body language as on her facial expressions. In the first volume, Rin appears closed off from everyone: rounded shoulders, downcast eyes, pursed lips, and folded arms. As Rin begins to trust Daikichi, however, her face and posture change: her limbs unfurl and her eyes brighten, and her repertory of faces soon includes pouty defiance and bravado. That same attention to detail extends to supporting cast members as well. Rin’s mother, whom Daikichi meets in volume two, comes across as impossibly young, swimming in an outfit too big for her slight frame, and fidgeting throughout her conversation with Daikichi, twisting her hair and avoiding eye contact in the manner of a sullen teenager.

The introduction of Rin’s mother suggests that future installments of Bunny Drop will continue to focus complex issues — what constitutes a family? who has the right to call himself a parent? what’s in the best interest of a damaged child? — in lieu of sitcom ones. (See sippy cups, bad dreams, and the stomach flu, above.) That Unita can take such potentially overwrought material and fashion a thoughtful, funny, and honest look at child-rearing is testament to her skill as a storyteller and — one suspects — as a parent. Easily one of 2010’s best new titles.