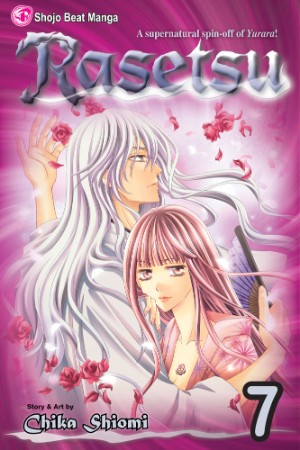 With the December holidays rapidly approaching, I find myself drifting backwards in time, recalling the places I’ve been, the people I’ve loved, and the many variations of myself that have existed over the course of forty-something Decembers.

It’s no small joy, then, that one of this week’s new releases brings me vividly back to my early teens, when I would have loved nothing more than to be a girl with great spiritual powers, a terrifying foe to fight, and two dreamy love interests to distract me from my fate. I’m speaking, of course, of Rasetsu, from mangaka Chika Shiomi, available in English from Viz Media’s Shojo Beat imprint.

Here’s what I said about volume six:

It’s easy for a slow-burning series like Rasetsu to get lost in a market full of showier shoujo manga, but this would be a terrible shame. I’ve had a peek at volume seven, and things are definitely ramping up! Feed your hungry inner teen. Check out Rasetsu!