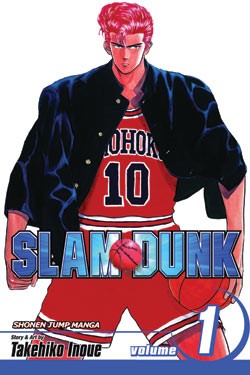 Red-haired tough guy Hanamichi Sakuragi just can’t get a girl. After a string of rejections in junior high, he finally meets pretty Haruko on his first day of high school. Trouble is, Haruko already has a huge crush on a junior high basketball star who has also enrolled at their school! Determined to win Haruko’s heart, Hanamichi decides to join the basketball team. He’s a huge, strong guy with a lot of natural ability. Unfortunately, he’s also brash, self-involved, and utterly lacking in maturity or emotional boundaries. Can Hanamichi ever learn to be a team player?

On one hand, Slam Dunk is an extreme example of a typical shonen sports manga, with its overblown characters, outrageous rivalries, and intense focus on winning. On the other, it is a fresh, lighthearted look at a guy who just can’t seem to catch a break, despite a level of optimism previously unknown to mankind.

It’s not that Hanamichi never wins, of course. The guy can’t lose in a fight, and he even manages to win (sort of) against Haruko’s brother Akagi (who also happens to be the captain of the basketball team) in an epic game of one-on-one. What he can’t win, no matter how he tries, is the girl, and it’s somehow refreshing to meet a shonen sports hero whose real focus is far, far from the game. Also, while Hanamichi’s myopic pig-headedness makes him generally insufferable, it’s also the key to his charm. 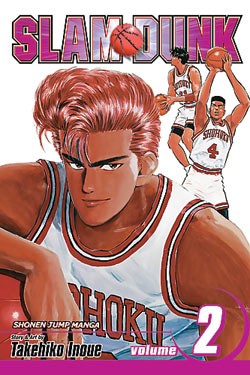 There’s a scene in the second volume, for instance, in which the captain of the school’s judo team attempts to lure Hanamichi away from basketball by offering him some photographs of Haruko in exchange. After a series of conversations consisting basically of, “So, will you join the team?” “No.” “But don’t you want the photos?” “I do!” it finally becomes clear that Hanamichi intends to refuse the captain’s offer and simply take the photos by force. Though the scene does nothing to improve Hanamichi’s image as a hopeless brute, it is surprisingly satisfying to see the judo captain’s tired scheme dismissed so easily.

Another strength of the series is its supporting characters. Though Hanamichi’s strong and silent love rival, Rukawa, is barely seen in these early volumes, basketball captain Akagi is already a powerful character. Mature enough to separate his personal dislike of Hanamichi from his responsibilities as captain, he displays the beginnings of the kind of depth and nuance found in Inoue’s later seinen series, Real. Also notable is the basketball team’s manager, Ayako, who is very much welcome as a confident, athletic, female presence on the testosterone-heavy court.

Inoue’s art is similarly refreshing, with a clean, easy-to-follow quality too rare in shonen manga. The artwork is quite expressive as well, revealing a real investment in the characters and a genuine love of the game.

Though the real action gets a slow start in favor of important characterization (and some less impressive class hi-jinx), Slam Dunk shows its potential right from the beginning. Just two volumes in, it’s not difficult to see why it’s a popular series on both sides of the Pacific. Recommended.

This review is a part of Shonen Sundays, a collaborative project with Michelle Smith. 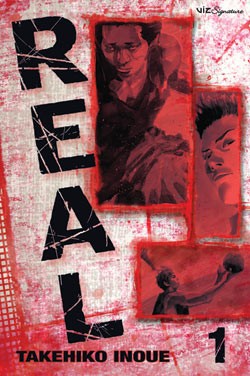 Tomomi Nomiya is a high school dropout, consumed by guilt over his involvement in a motorcycle accident that leaves a young woman without the use of her legs. Kiyoharu Togawa is a former junior high runner whose struggle with bone cancer costs him his right leg below the knee. Hisanobu Takahashi is a high school basketball hotshot who becomes paralyzed from the chest down after colliding with a truck while riding a stolen bicycle. What these three teens all have in common is a passion for basketball.

It’s not quite fair to compare this series to Takehiko Inoue’s earlier basketball series, Slam Dunk. After all, Slam Dunk is written for young boys, and Real for adults. Still, with both series being released concurrently in English, its difficult to resist. Though Slam Dunk contains the seeds of a great basketball manga, it is through Real that Inoue is able to express not only his real love of the game, but his real insight into the human condition.

The main action of the series revolves around the Tigers, a wheelchair basketball team with which Togawa maintains a fairly tormented relationship over the course of the series’ early volumes. It’s this team that brings Togawa and Nomiya together to begin with (in a sort of roundabout way). And though Takahashi has (as of volume eight) still just barely begun rehabilitation that might make it possible for him to one day participate in wheelchair basketball, it feels inevitable that he’ll end up there at some point. The basketball scenes in this series are intense, in a very different way from the super-fueled play in Slam Dunk, and entirely gripping even for non-fans of the game. 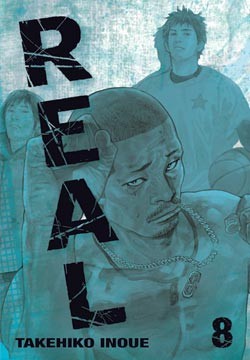 What’s most impressive about this series, however, is Inoue’s ability to get inside his characters’ heads and transform their thoughts and feelings into compelling narrative. Enormous chunks of the later volumes, for instance, involve Takahashi’s bitterness over his father leaving him as a child, torment over his current condition, and his inability to adjust to his new body.

Inoue not only brings Takahashi’s memories to life with a series of powerful flashbacks, he also focuses heavily on Takahashi’s grueling rehabilitation process, with a level of realism that kicks your average training montage squarely in the behind. Yet, through all this, Inoue deftly steers clear of allowing his story become mired in its own weight. Even the series’ heaviest sequences are a true pleasure to read.

Something that seems important to note, and possibly why Real is able to avoid becoming intolerably dark, is that it’s clear from the beginning that Inoue genuinely likes people. Despite the fact that each of his characters has endured terrible heartbreak, pain, and various levels of personal misery (not to mention that most of them have also been responsible for causing significant pain to others), Real is far from cynical. There is no overarching disappointment in humanity here, no deep bitterness, no long-winded speeches about the unavoidable fallibility of the species. Even his characters’ most bitter reflections are directed toward individuals rather than humanity as a whole.

Inoue’s artwork in this series is impressively mature. Without the attractive sheen of Slam Dunk‘s shonen sensibility, the world of Real is unpolished and gritty. Inoue’s early expressiveness is even more pronounced in this series, and much more detailed. Also, despite some great dialogue, Inoue lets his artwork do the bulk of the storytelling. Important moments are played out visually, panel-to-panel, without the need for any narration or extraneous dialogue to pick up the slack.

Both heart-wrenching and down-to-earth, this series makes the most of its human drama, both on and off the court, without ever sinking into melodrama. Simply put, Real is real. Highly recommended.

Review copies of vols. 5-8 provided by the publisher.