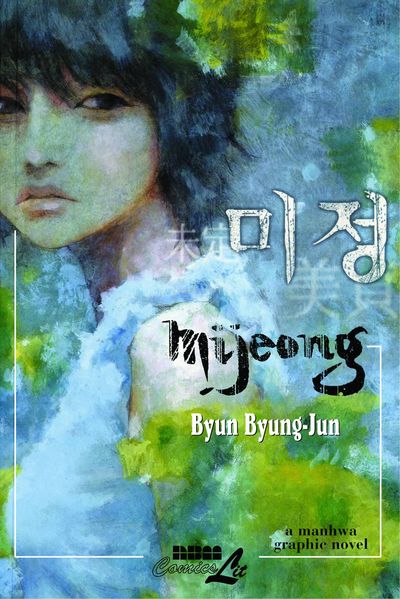 Mijeong | By Byun Byung-Jun | Published by NBM Publishing – An angel finds his way to earth, drawn to a world that seems to embody the eternal sadness he carries with him, and longing for someone who might understand his pain. He finds this in a young woman he spots along the street, and in a moment of impulsive rebellion takes it upon himself to save her from being struck by an oncoming car. It is a moment of sharp ecstasy for the angel, who is able to feel both the woman’s deep despair and her great capacity to love as he embraces her. By doing this, however, he has doomed them both to a life of suffering, “a rending love for which I can do nothing.” “Her name is Mijeong,” he says, “and I have no name yet, here.” It is here that the tale ends–the title story in Byun Byung-Jun’s second anthology of short manhwa, Mijeong–a beautiful introduction to this melancholic collection.

Though the quality of its individual tales is somewhat uneven, Mijeong as a whole promises a great future for the artist, whose insight into his deeply lost and broken characters is nearly as stunning as his often impressionistic art style. The collection wanders in and out between true melancholy and dark humor, sometimes with more success than others. The volume’s second story, “Yeon-du, Seventeen Years Old,” the intersecting tales of an emotionally damaged young woman seeking revenge for the death of a childhood love and a desperately lonely older man, is one of its strongest and most thoughtful. Just as effective is the darkly humorous story, “Courage, Grandfather!” in which a girl expresses her gratitude to a boy who rescued her from a brutal attack, viewed entirely through the filter of a cat’s unrequited love. Another of the volume’s best shorts, “Utility,” (story by Yun In-wan) about a group of students dispassionately pondering the most effective way to dispose of a dead sibling’s body, is starkly brilliant yet quite difficult to read, thanks to its subject matter. On the flip side, “202 Villa Siril,” a dark comedy about a manhwa artist with a disturbing power, feels predictable and flat.

A recurring theme throughout the anthology is its characters’ enslavement to their pasts. “For me, only my past has any meaning,” says young Yeon-du in the story named for her. What keeps this book from slipping into irreparable despair, however, is that this isn’t only a bad thing. Byun Byung-Jun’s characters are both burdened and enriched by their histories, an insight that rings inescapably true. Even when longing for the past leaves characters bleeding to death in the grass (as in the grimly abrupt “Song for You”) there is an unmistakable sense of hope lingering around the edges of most of these stories—a haunting paradox that helps maintain the volume’s momentum.

Though the stories’ characters are almost uniformly touching, what is notable above all is the persistent sense of place. The volume’s first story sets the tone clearly with the cold, unfeeling city, filthy with despair, indifferent to its people’s gaping, open wounds. Whether it is the people who have created their environment or the other way around is a question in the background of each story—one that is destined to remain unanswered.

Byun Byung-Jun’s art varies throughout the collection, from the moody watercolor of “Song for You” to the sketchy photorealism of “Yeon-du, Seventeen Years Old,” though in all cases the art feels unsettled and immature. This is not so much a criticism as an observation, as there is a pervading sense that one is previewing the work of an artist who will inevitably achieve importance in the medium. In a note at the end of the book, the artist confesses that the work reflects his own state of mind. “Eternally hesitant, I feel like I’m stuck at an impasse.” What the work truly reveals, however, both in its storytelling and style, is a restless mind on the brink of true brilliance—something for all of us to look forward to.

Simultaneously dark and hopeful, Mijeong‘s inconsistency and fretful tone may betray the early weaknesses of its creator, but its insight and uncommon beauty promise much greater things to come.