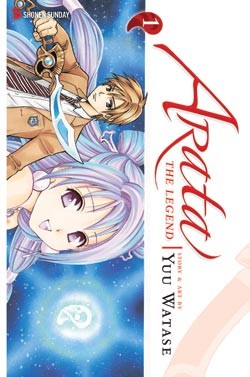 In a world full of magic and gods, young Arata of the Hime Clan has been framed for the murder of his people’s beloved princess and is now on the run from her twelve godlike “protectors” who actually committed the crime. Arata Hinohara is a modern-day schoolboy just entering high school, where a bully from his past threatens to ruin the new friendships he’s just begun to form. When otherworld Arata flees into an enchanted forest in order to evade his pursuers, the two Aratas suddenly change places, each finding himself in a truly foreign world.

Though much of the story’s setup and look will be very familiar to fans of Watase’s well-known shojo epic Fushigi Yugi (and its currently-running prequel, Fushigi Yugi Genbu Kaiden), Arata: The Legend has considerable charm of its own. By exchanging her “schoolgirl in a strange land” for a schoolboy in a strange land, Watase plays right into her greatest strengths–period-inspired fantasy, action sequences, and pretty young men.

In otherworld Arata, Watase has inserted all the characteristics of the standard shonen hero. Brash, boyish, goodhearted, and strong, this Arata would be at home in nearly any shonen manga universe, protecting his loved ones with all his might. With modern-day Arata, however, she’s gone off the beaten path, at least to start. 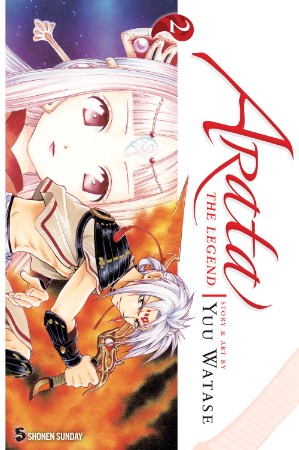 Arata Hinohara is deeply scarred by the intense bullying that haunted him through junior high. Anxious not to stand out at his new high school, he hides his athletic abilities and avoids joining any clubs. He tentatively accepts the new friendships offered to him, but is wary of pushing them too far.

When, just a month into the new school year, the ringleader of his junior high misery suddenly joins his class, it’s a nightmare come true. And as his new friends abandon him, one by one, bitterness and cynicism take over his mind. Still, Arata’s raw hurt keeps him vulnerable, turning him not into a typical hard-as-nails loner (as much as he might wish it), but just a deflated, lonely boy who desperately needs someone to believe in him.

Though this may not be exactly profound, it’s a nice change of pace for a shonen adventure/fantasy and it goes a long way towards helping old material feel new again. With the first two volumes focusing heavily on Arata Hinohara, it will be interesting to see what Watase does with otherworld Arata in the next volume as he heads off for his first day at high school.

While Watase’s shojo fantasies have always featured a lot of action, this series allows her to really shine, with fights, chases, and weapons galore. There’s a natural, easy feel to the artwork in this series, even when compared to her other current work like Fushigi Yugi Genbu Kaiden, as though by choosing to draw shonen action heroes, she’s finally really hit her stride. Her gift for pretty, poignant faces is used to great advantage as well–something that surely can’t be hurting Weekly Shonen Sunday‘s crossover numbers.

Though Arata: The Legend may offer nothing truly new, its vulnerable hero and attractive, expressive artwork help to create a thoroughly enjoyable fantasy with a surprisingly fresh feel.

Review copy of volume two provided by the publisher.