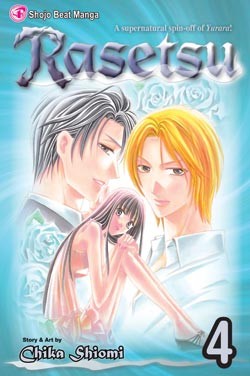 Ghostly hi-jinx continue in this volume, as Rasetsu becomes more aware of her feelings for Yako, finally compelling her to do something about it. Realizing that his chances may be running out, Kuryu decides to make a move of his own. Meanwhile, Yako discovers how to amplify his powers (much to Kuryu’s chagrin) and Rasetsu receives a visit from her dreaded future lover.

At first glance, volume four of Ratsetsu seems very much like the first three. Early chapters featuring humorous takes on Kuryu and Yako’s growing rivalry and the gang getting stuck in an elevator offer up the same kind of light, enjoyable froth that has made up most of the series so far. In the volume’s later chapters, however, Shiomi ramps up the drama to great effect.

Yako’s stunningly cold manipulation of Kuryu’s equally stunning arrogance is awesome in every sense of the word, casting new light on Yako’s character and shocking Kuryu to the core, something I’ve wanted to see happen for a while. On the other hand, this turn of events leads directly to Kuryu’s accelerated pursuit of Rasetsu, which seems likely to cause pain for everyone (including himself) down the line.

Even four volumes in, Kuryu is still a mystery. With his immense power (now no longer hidden), he seems both dangerous and potentially sinister. Yet he often appears genuinely sincere, especially regarding Rasetsu and his feelings for her. Was his early Seishirō Sakurazuka (Tokyo Babylon) vibe a red herring? It’s too early to know for sure.

Though this series will never be more than standard supernatural shojo fare, that’s not exactly a bad thing. Rasetsu plays out familiar tropes with enthusiasm, offering up the kind of casual, comforting read one often craves at the end of a long day. With this volume’s fresh dose of drama and romance, things won’t be getting old anytime soon.