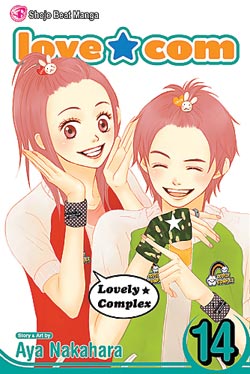 In this volume, Risa and Otani’s relationship is once again under attack. To Risa’s horror, her own grandfather has hired a woman to seduce Otani and break them up. Even worse, Otani believes the sob story he’s been given by the beautiful, buxom Hitomi and accuses Risa of lying to him about her grandfather’s scheme. When the truth comes out will it matter who was wrong and who was right now that a jealous and conniving Hitomi has tricked Risa and left her at the mercy of two yakuza thugs?

This is a romantic comedy so of course a plotline like this will never end as tragically as it could. Still, it is the darkest plotline (and Hitomi, the character with the blackest heart) to appear in Love* Com. Being the gullible reader I am, I believed Risa was in real danger. The threat of rape just doesn’t sit right with me as fodder for comedic misunderstanding. Love*Com has always delivered liberal doses of fluffy silliness along with angst as Risa and Otani discover what they mean to each other and learn what it means to like someone, let alone be in love with them. The mangaka, Aya Nakara, has characterized her manga as intended to bring a smile to the faces of her readers and give them even a moment of enjoyment in their lives. In that regard she has always delivered in spades. I found plenty to laugh about in this volume as I have in the volumes that preceded it–not to mention warm and fuzzy moments to make me smile. Risa and Otani are such innocent and awkward leads–two loveable stumbling idiots who are absolutely made for each other. I do not mean to pick on Nakahara too much for this storyline. It just struck me as too serious and dark a dilemma for an otherwise non-threatening shojo romantic comedy.

Speaking of non-threatening, this volume marks the return of the clownishly-drawn, not-too-bright punks who Risa’s brother nearly came to blows with in the previous volume. Nakahara’s artwork is strongest when it comes to facial expression, especially the eyes. Yet the facial features of her yakuza are drawn with very thin lines and no shading, reducing them almost to doodles that look like they don’t quite belong in the same universe as our main characters. I don’t particularly like the design and execution of the yakuza characters. It feels sloppy in comparison to how beautiful (or at least human) the rest of her characters look most of the time. However, I do feel Nakahara successfully uses this same technique of reducing the facial features of the rest of her cast to thin lines that stretch or contort into odd shapes to comically express certain emotions more strongly. It’s funny, but it’s only just now, fourteen volumes into the series, that it occurs to me: Nakahara uses this instead of drawing chibis!

I really am enjoying this series. It has given me reason to smile when I have really needed it during the dreary fall and winter days, and it holds up well to re-reads. It is definitely one for my keeper shelf. I look forward to the final three volumes!

Deanna Gauthier is a hardworking Library Assistant and aspiring writer with two cats. She is an avid music lover and finds that the best way to destress is to sing along with her iPod, Toto, at the top of her lungs (while no one else is around). She has found her true passion in life is manga and is doing her best to work it into every aspect of her work and personal life. Her family and friends have been heard to joke from time to time about the need for an intervention. Besides manga, Deanna enjoys baseball, roller derby, concerts, and movies (all of which have taken a backseat to manga lately).