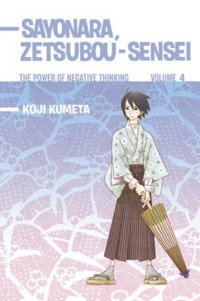 Suicidal schoolteacher Nozomu Itoshiki (Zetsubou-sensei) and his students are back, with a satirical take on such topics as Christmas, leftovers, societal hierarchies, cooling-off periods, second opinions, and how to deal with dead space. Even exam students are taken to task in this volume, as Zetsubou-sensei despairs over their ability to get away with nearly anything–a privilege he attempts to recapture for himself by engaging in a series of increasingly ridiculous certification programs. Easily passing tests for certifications in flower arrangement and animal breeding (and scraping by in subjects like “love”), he finds himself ultimately unqualified for either “life” or “death” (a certification that requires numerous sub-licenses, such as “writing a suicide note” and “how to leave your shoes”), leaving him trapped ever further in despair.

Since this series has been dismissed by some as relying too heavily on inside jokes and obscure cultural references to be effective with North American readers, it is important to note that volume four is easily the most accessible in the series so far, requiring very few trips to the translator’s notes provided in the back (and virtually none for readers familiar with Japanese manzai characters—the only cultural reference in this volume absolutely required for the understanding of an entire chapter). Smooth reading facilitates smooth comedy, making this volume more universally hilarious than its predecessors as well. For those who have loved this series from the beginning, volume four is yet another fabulous treat provided by tireless translator/adapter Joyce Aurino and the folks at Del Rey Manga. For those who have yet to warm to the series’ charms, perhaps this is the place to start.