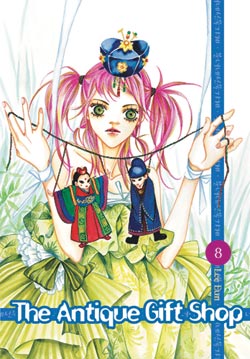 This volume is split into two distinct stories related to the volume’s namesake. In one, a mysterious Nepalese goddess, or kumari, comes a-calling to the Antique Gift Shop and she has an amazing gift for sales. Hoping that she may soon be free of her commitment to the store, Bun-Nyuh is both amazed and ready to call it quits. When Mr. Yang questions the kumari’s motivation and stands in the way of her making sales, Bun-Nyuh decides to take him up on his offer of leaving the store at any time when his services are no longer needed. Of course, the moment he leaves, Bun-Nyuh finds herself realizing the truth behind the kumari. Will Bun-Nyuh ever rid herself of the burden that is the Antique Gift Shop?

In the second story, a young mermaid emerges from the Han River, desperate after finding her prince after reading portions of The Little Mermaid. After making a deal with the witch of the Han River, the mermaid wears the shoes of another woman in order to live with her prince happily ever after. Who she finds is not a prince, though, as Wang-ja is a beaten-down man who takes care of a morbidly obese woman who treats him poorly, calls him names and orders him around.

As the story continues, the mermaid becomes increasingly burdened as she lives the life of someone else. When the mermaid and the so-called prince run into Bun-Nyuh, the prince’s connection to the shoes is revealed and the mermaid longs to return to the Han River. When the witch tells the mermaid the truth behind the shoes she was once so happy to wear, will the mermaid be able to do as the witch says so she can rejoin her family and the sea? Or will she disappear into the ocean as sea foam, forever wandering from place to place?

I jumped into this volume without any prior knowledge of the series. While I was confused at first — which, I think, is entirely normal considering this was the eighth volume — I caught on quickly and recognized the situations and characters for who they are. These are seemingly episodic tales, with threads of connection via reccurring characters.

The obligation Bun-Nyuh has to the store is evident and her excitement in ridding herself of the burden is immediately apparent, so I saw where the story was going quickly. But, while I saw it coming, it was fascinating to watch it unfold. Like watching a train wreck, I was compelled to see how things played out for Bun-Nyuh. While the results are mostly comedic on the surface, there’s a prevailing ominous tone overall that continues through the second story. Considering I’ve only started enjoying episodic stories quite recently, I was surprised by how much I liked this volume, especially since it’s from midway in the series.

As far as art goes, it’s obvious this is a manhwa, as it carries all the hallmarks of Korean art — more realistic-looking characters with long, graceful limbs, pouty mouths and large eyes. The costumes are also elaborate, whether within the story, or the pages separating each chapter, and there’s an abundant, if well-used, use of screentone.

While the art reminded me mostly of Goong, I was also reminded of Moyoco Anno’s Happy Mania, where the art is infused with a manic quality. In the first story, Bun-Nyuh is filled with a giddy energy at the prospect of selling everything in the store and it comes through in the art. In her moments of doubt, much like Happy Mania‘s main character Shigeta, Bun-Nyuh energy plummets and she’s surrounded by a dark aura. Overall, Lee Eun does a great job both telling and illustrating this series.

Unfortunately, my lone point of confusion in this manhwa was related to character design — specifically that of the “witch” of Han River and Mr. Yang. Since I’m unfamiliar with the rest of this series, I’m not sure if they are one and the same, but the witch’s actions did not seem completely out of character for the mysterious Yang. I’ll just chalk this confusion up to not having the opportunity to read this series in its entirety.

Overall, I liked this manhwa — there are interesting, if sometimes conflicted, characters, a compelling backstory, mystery and even tragic romance. Since I jumped into this series mid-stream, I’m interested in it enough to seek out the prior volumes. If you like episodic tales, or a dose of “be careful what you wish for” morals, I’d heartily recommend The Antique Gift Shop.

Lorena Nava Ruggero is a professional writer and editor in Southern California. She loves nothing more than reading manga with her French bulldog, Rocky, at her side. When she's not writing reviews or reading manga, she enjoys cooking, hiking and watching movies, including anime. Each year since high school, she has saved up all her nickels and dimes to head to San Diego Comic-Con International, where she immerses herself in all things "nerd" for an all-too-glorious four and a half days. In addition to writing for Manga Bookshelf, she also contributes to MangaCast and writes daily reviews for her own blog, i heart manga.