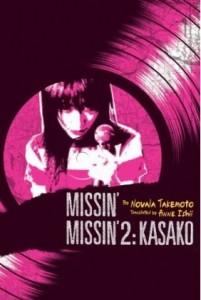 After reading Missin’ and Missin’ 2, I’m convinced that novelist Novala Takemoto was a teenage girl in a previous life. But not the kind of girl who was on the cheerleading squad, the volleyball team, or the school council — no, Takemoto was the too-cool-for-school girl, the one whose unique fashion sense, sullen demeanor, and indifference to high school mores made her seem more adult than her peers, even if her behavior and emotions were, in fact, just as juvenile as everyone else’s. Though this kind of angry female rebel is a stock character in young adult novels, Takemoto has a special gift for making them sound like real girls, not an adult’s idea of what a disaffected teenager sounds like.

Consider Kasako, the heroine of Missin’ and Missin’ 2. Kasako feels estranged from her peers’ pop-culture interests, finding refuge in “the antique, the outmoded, indeed, the passe.” Though she has a special affinity for Schubert lieder and Rococo artwork, she finds a kindred spirit in Nobuko Yoshiya, a popular romance novelist whose career spanned the Taisho and Showa periods. Like an earlier generation of schoolgirls, Kasako is enthralled with Yoshiya’s Hana monogatari (Tales of the Flower, 1916 – 1924), a pioneering work of Class S fiction, or stories about romantic friendships between teenage girls.

Today I suppose we would call them lesbians, but I believe there was a certain fundamental difference between an S and a lesbian. S couples would share epistolary journals and carry matching handkerchiefs, such forget-me-knots deepening their secret bond. Tales of the Flower was filled with the exquisite language of these exchanged stories and objects. The helpless young woman inexplicably welled up with tears at the sight of the moon… Sentences like that abounded throughout the book.

Kasako doesn’t just swoon over Yoshiya’s words; she views them as commandments, declaring, “I read Tales of the Flower and decided to live in it.”

While watching television — an activity she professes to disdain — she spies Missin, the lead singer of punk band Cid Vicious. In Missin’s defiant attitude and refined features, Kasako believes she’s found “a maiden among maidens,” and proceeds to learn as much as she can about her new obsession, shopping at MILK (Missin’s preferred boutique), following Missin’s career, and contriving to meet her. A chance encounter leads Kasako to conclude that she and Missin are destined to be together, inspiring Kasako to even greater heights of stalker-ish lunacy that eventually insinuate her into Missin’s life.

Reading the first Missin’ story, one might easily conclude that Takemoto intended his work as a parody of Hana monogatori, as the story ends with Kasako pledging her undying loyalty to Missin, vowing even to kill her friend should Missin command it. In the second story, however, Takemoto quickly finds silver linings in every potentially tragic situation. One could read this as a stroke of literary inspiration on Takemoto’s part, pointing out the absurdity of certain S Class conventions, but I’m more inclined to view it as a flaw in his storytelling; he has a tendency towards sentimental, happy endings that seem at odds with his arch tone and Baroque plot twists.

The other flaw in Takemoto’s writing is his tendency to name-drop. As I noted in my review of Takemoto’s later novel Kamikaze Girls,

[He] sometimes allows brand consciousness and pop-culture allusions to substitute for real characterization. Teenagers certainly define themselves in terms of what clothes they wear and what pop stars they idolize, but the author has a responsibility to dig a little deeper to show us who his characters really are beneath the posturing, something Takemoto doesn’t do as well as ventriloquizing [the heroine’s] thoughts about the relative merits of Vivienne Westwood…

The same problem recurs throughout Missin’ and Missin’ 2; characters have long, impassioned conversations about Vivienne Westwood’s clothing and Malcolm McLaren’s The Great Rock ‘n’ Roll Swindle, but these passages are less revelatory than Takemoto intends them to be; if anything, they read like Wikipedia entries or history lessons instead of declarations of genuine feeling.

Still, it’s hard to deny the appeal of Takemoto’s stories. He understands how fiercely opinionated teenagers are, and how utterly self-deluded they can be; as we read Missin’ and Missin’ 2, we quickly come to see how much of Kasako’s narration is an elaborate justification for her compulsive behavior. At the same time, however, Takemoto doesn’t mock his heroine. She may be ridiculous, but he honors her passions, even as he reveals their potentially devastating consequences. His writing manages to be disturbing, melodramatic, and hilariously bitchy all at once — not unlike spending time with real teens. Recommended.