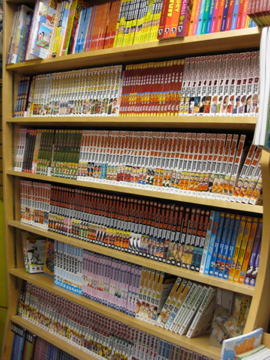 That commitment isn’t limited to seinen titles or certifiable hits; Comicopia has devoted entire walls to kid-friendly manga and yaoi as well. It’s the only place I’ve ever seen all eighteen volumes of Dr. Slump and all three volumes of Yakuza in Love in stock.

The store’s selection is a big part of the draw, but it isn’t the full story. Comicopia has a friendly staff that knows their stuff, too. Manager Shannon Outlaw “practically came out of the womb with an X-men comic in hand,” while Assistant Manager Angela Outlaw and Manga Manager Maggie Curtis are both dyed-in-the-wool comic fans whose enthusiasm and expertise inform the “Awesomesauce Manga” display, an eclectic selection of new and noteworthy releases. All three make an effort to cultivate relationships with customers, setting aside new arrivals for Wednesday regulars and making recommendations to anyone who asks for help. “I have one customer who says I know her taste better than she does!” Curtis jokes. Their most recent initiative: a “Manga for People Who Hate Manga” display featuring a variety of horror, sci-fi, and action-oriented series with genuine crossover appeal, e.g. Berserk, The Kurosagi Corpse Delivery Service, Monster and Parasyte. 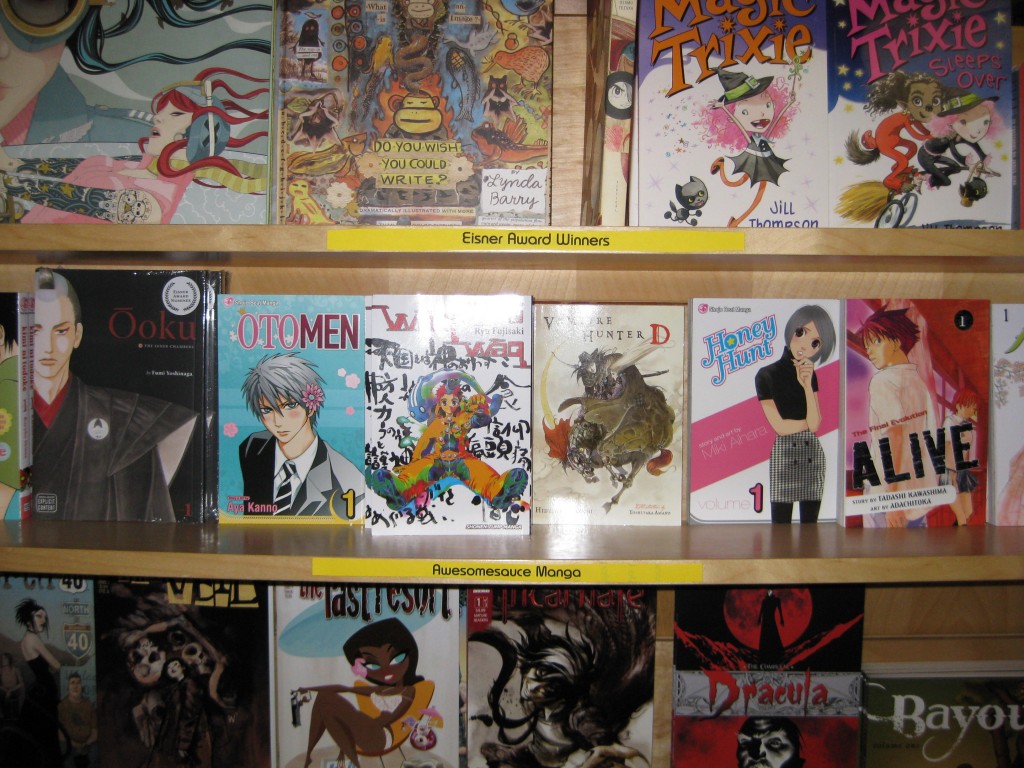 Recent staff picks (a.k.a. the “Awesomesauce Manga” display) included Alive: The Final Evolution, Ooku, Waq Waq, and The Name of the Flower. 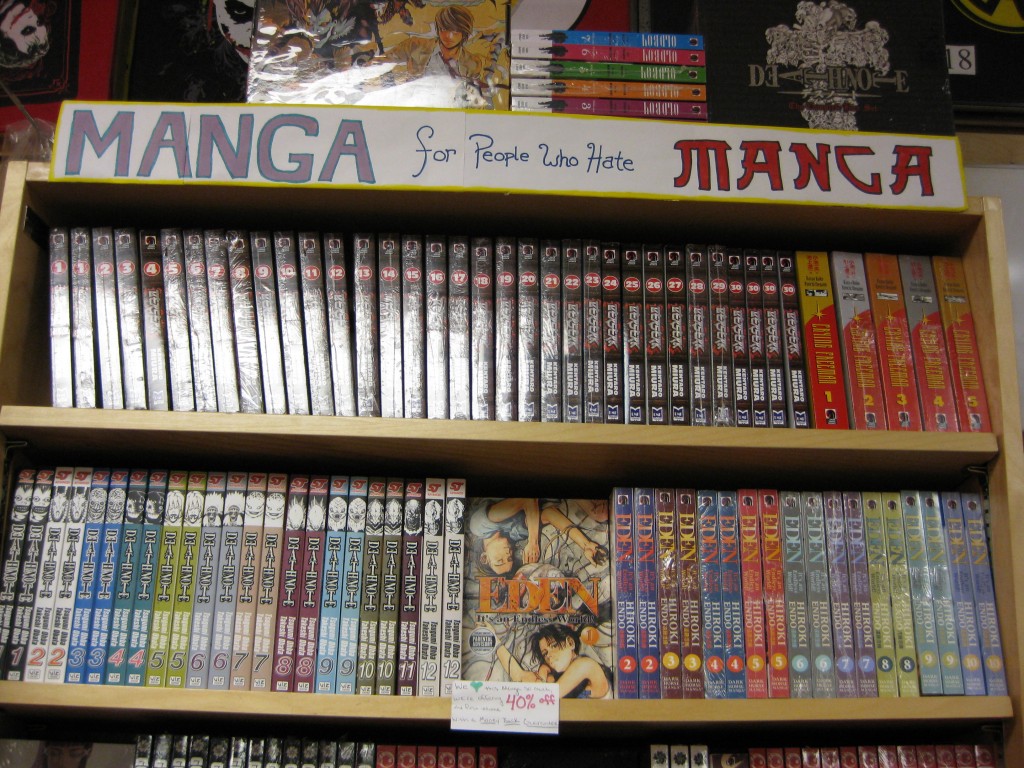 The Manga For People Who Hate Manga display.

Lehman, who served as an Eisner judge in 2002, shares his staff’s enthusiasm for manga. “My first exposure to manga came in the 1980s, when Eclipse Comics was releasing Area 88, Kamui, and Lone Wolf and Cub,” he notes. “In the 1990s, it became a bigger and bigger part of our business. Manga now takes up almost half the store’s shelf space.” Comicopia participated in the first Anime Boston convention in 2003, one of only two vendors selling manga onsite. “We were slammed,” Lehman says. He credits his staff with turning Anime Boston into the store’s “biggest ongoing project.” Comicopia has steadily increased its presence at Anime Boston, sponsoring artist signings and offering con-goers a mixture of bargain-bin titles and hot-off-the-press releases. In anticipation of the 2010 show, Lehman and crew will be holding a pre-registration event at Comicopia on Saturday, September 12th from 1:00 – 5:00 PM. (Click here for details.) 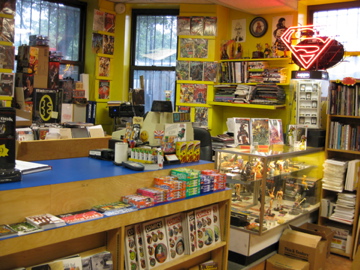 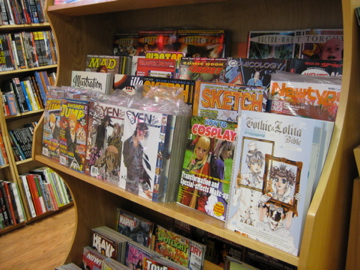 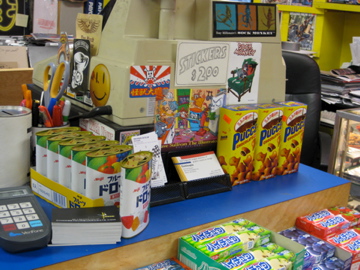 From left to right: the register, the magazine section (always well-stocked with manga and cosplay titles), and a fine assortment of J-snacks.

Given its great selection and cool staff — and really, how could you not like a store manned by two Outlaw sisters? — it’s easy to see why Comicopia was one of four finalists for this year’s Eisner Spirit of Retailing Award. Ask staff members what honor means the most to them, however, and they’ll tell you that it’s the Trans-forming Our Community Award, which Comicopia received for its colorful, enthusiastic participation in this year’s Boston Pride Parade. (They designed and manned a superhero-themed float; click here for pictures and the full scoop.) The fact that Comicopia’s staff is so actively engaged with the community speaks volumes about the store, its people, and its welcoming atmosphere; it epitomizes what a “local comic shop” should be.

WHAT TO KNOW BEFORE YOU GO…

Comicopia is located in Kenmore Square, approximately two blocks from the Kenmore Square T Station (Green Line; serviced by B, C, and D trains) and a variety of bus lines. (Click here for directions.) Comicopia is also accessible by car via Storrow Drive and the Mass Pike; as the Comicopia site notes, however, driving is not advisable when the Red Sox are playing at Fenway Park. Sometimes you really can’t get there from here.

New arrivals are posted on the Comicopia website each week. (Regulars can also sign up for the store’s newsletter by clicking here; the full shipping list will then be delivered to your inbox on Tuesday evenings.) N.B. Owing to the vagaries of the comic distribution system, Comicopia usually stocks new Del Rey, Tokyopop, and Viz releases one to two weeks before the publisher’s projected street date — a vital resource when you’re eager to go to DMC before everyone else!

College students who are members of their schools’ anime club are entitled to a 10% discount on manga when they present proof of membership.

Last but not last, Comicopia is on Twitter. Chat with owner Matt Lehman and stay apprised of new arrivals and cool developments in real time: http://www.twitter.com/comicopia.