As my final offering for Girls Only Week, I’m going to finally write about a series I’ve been planning to talk about for some time: Ai Yazawa’s Paradise Kiss. This isn’t my first time reading the series though it is my first attempt at putting something down in words about it. I was surprised, however, how differently it read for me this time around. I expect it’s a series that will continue to change over time for me, as my own perspective on life changes, something that I think very clearly demonstrates its universal appeal. So on we go. 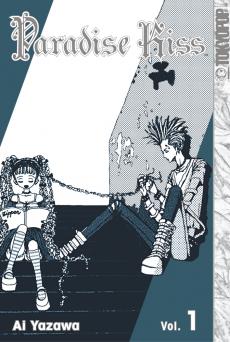 Yukari Hayasaka is a student at an elite high school whose only clear goal is to get into the right college, spurred on by her parents’ wishes. As noble as it appears on the surface, this half-hearted ambition can’t possibly hold up when confronted head-on by a group of students from Yazawa School for the Arts (shortened as “Yaza Arts”) who spot Yukari in the street and beg her to act as model for their entry into the school’s upcoming fashion show. Representing their own indie label (“Paradise Kiss”) with great passion and ambition, the students finally manage to persuade Yukari to participate. As they open her mind up to a world beyond good grades and college entrance exams, designer George Koizumi also opens her heart to love and sexual desire. As the series continues, Yukari’s life is transformed completely thanks to charismatic George, adorable, Lolita-styled Miwako, punk rocker Arashi, and elegant, transgender pattern-maker Isabella, each of whom comes to care for her in his or her own fashion. Eventually deciding to pursue a career as a model, Yukari must face her parents’ opposition and her own personal obstacles in order to make her own way.

As someone with exactly zero interest in fashion or the fashion industry, its unlikely that I ever would have picked up Paradise Kiss if I did not already love Yazawa’s longer-running series NANA. Truthfully, though, despite its setting, this tale of youthful ambition and self-discovery is universal enough to appeal to readers in all walks of life and it certainly has appealed to me. It is the kind of story with such rich, nuanced characterization that one is able to recognize bits of oneself in nearly every character, whether that is a desirable thing or not. Efficiently yet thoroughly told in a mere five volumes, Paradise Kiss comes as close to a perfect series as one could ever hope for. Its appealing, complicated characters, crisp, well-plotted, storytelling, sharp humor, and gorgeous art provide true reading pleasure from start to finish. The series feels light as a feather–never taking itself too seriously–yet somehow able to present its characters and their stories with such genuine honesty and affection, it never feels as though they are being trivialized in the slightest.

All of the story’s characters are very real people and very much human, with all that entails. They are mostly nice, a little bit broken, occasionally cruel or selfish, but also capable of real love and kindness. Yukari is a wonderful young heroine for this kind of story–pretty but not vain, smart but not brilliant, with very little personal identity outside of what her parents have created for her at the beginning of the story. Buried deep, however, is a sharp, ambitious young woman with a truly commanding quality she slowly learns how to use over the course of the series. Her relationship with George (who is vain, brilliant, and much too comfortable with his personal identity, frankly) is destined for ruin from the start, and though they learn a lot from each other over the course of their often-destructive romance, there is no magical fix for their problems–no easy walk into the sunset, which is quite painful to watch but also very refreshing in a story published for young women. Yukari’s path, too, is never portrayed as anything like a charmed life. Some doors do open quickly for her, thanks to contacts made through the Yaza Arts kids, but her choices require tenacity and hard work, and the scope of her career as a relatively short (in the worldwide field) Asian model is portrayed with an almost harsh realism.

The supporting players are no less rich, which is particularly impressive in a series this short. Adorable Miwako and guarded Arashi are opposites in so many ways, though their romance is the one that feels the most solid throughout, despite their tangled love-triangle with Yukari’s school crush, Hiro, with whom they share a long history. Miwako’s friendship with Yukari is one of the most likable aspects of the series as well, though Arashi’s brooding concern is perhaps just as charming. Soft-spoken Isabella, my personal favorite, is the most reserved and reticent of the group, but exudes a gentle kindness that is unmatched by anyone else. She is the type of character who never says anything that isn’t important. What makes these characters feel so real, despite their lesser “screen time,” is that every time they appear, bits of their offscreen lives are carried along with them. They do not exist simply as people for the main couple to interact with, but very obviously have their own full lives, with their own dreams and ambitions, some of which are only hinted at in the story itself. 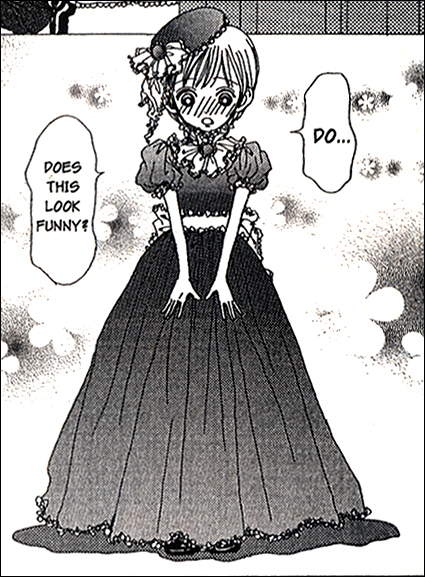 One of the things that startled me on this particular re-read, is that previously–and I am sure this is an unpopular view–I had quite consistently disliked George. I found his bravado and his persistent detachment from other people whenever they became emotionally complicated (particularly Yukari when they were romantically involved) incredibly off-putting and it got in the way of any good points he might have in my mind. This time around, though, I actually developed a real affection for him and I think it is mainly due to what is, in my opinion, the most touching moment in the entire series–a flashback to the day that little third-grader George (who already has multiple earrings and the confidence/arrogance to order champagne from someone else’s butler) turns up at then-little boy Isabella’s house with a dress made he’d made just for her, addressing her as “Miss Yamamoto” and declaring it the birthday of her female self.

I hesitate to call this “kindness” on George’s part because I think that undervalues his actions (and insults Isabella). Also, George is really not kind. Perhaps what this really displays in George is genuine, unconditional acceptance. When Isabella (despite having told George she has always felt out of place as a boy) protests, saying, “I’m a boy! I can’t dress like a girl!” George’s response is simply, “Who decided that?” He’s able to recognize and accept Isabella’s true self without question or fuss and even help Isabella herself to do so. Seeing this here in him presents a contradiction, of course. After all, I can’t count the number of times I faulted him for not showing that kind of acceptance and full recognition toward Yukari when she needed it. But this really is the way he interacts with the other characters in the story, and it’s something I can’t help appreciating in him now that I’ve fully recognized it. Thanks to this realization, I’m also more able to appreciate George’s obvious vulnerability and give him much more benefit of the doubt in terms of his honesty about his feelings. 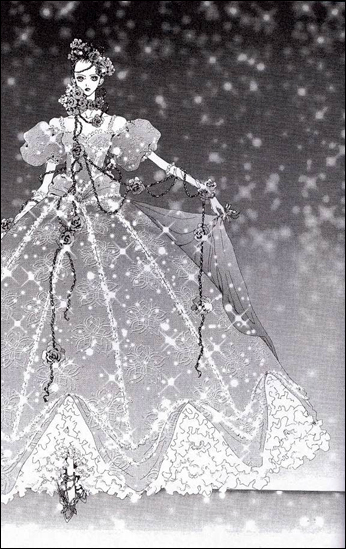 Just as in NANA (and perhaps even more so) Yazawa’s art is simply beautiful. The character designs, the clothes, the attention to detail–everything is intricate and delicately gorgeous. Though the panel layouts are sometimes more cramped than what is seen in NANA, especially early on, there is no lack of clarity there. Something I’ve always admired about her art, is that she’s able to take the standard manga conventions for humor–distorted faces and extreme expression–and make them seem oddly normal, or at least somehow human. One gets the sense when looking at a character in wide-mouthed shock that this is what the character looks like inside his/her own head, and suddenly everything seems just right from that perspective. More than anything, however, this manga is visually defined by its glorious, elaborate fashion. George’s over-the-top designs are honestly swoon-worthy and it is a pure pleasure to look at them, page after page.

I feel that I could go on forever and still fail to do justice to the sheer exquisiteness of this series, so I’ll wind things up here. Suffice it to say that Paradise Kiss, with its complex look at beauty, longing, and personal discovery, truly is a bit of manga paradise.