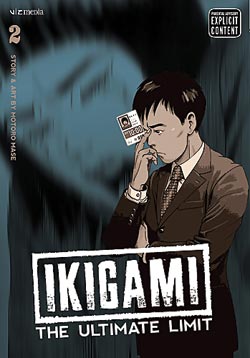 Fujimoto is becoming accustomed to his job as the harbinger of people’s doom, but he’s not sure if that’s a good thing. The volume opens as his girlfriend tells him she’s leaving him because she feels crushed by the weight of his work. Meanwhile, the work goes on and this volume introduces two new victims of the government’s Social Welfare Act. Both stories are tragic, of course, perhaps even more so than those told in the first volume, though both victims also end up changing other people’s lives for the better, one through the work he’s able to during his short life, and the other, sadly, through her death.

Despite whatever “good” has been done by these individuals, however, there is still no evidence that the government’s systematic murder of its citizens is actually a positive thing at all. One emerges from this volume hoping against hope that Fujimoto might find the stomach to start a rebellion of some kind, not that he’s yet demonstrated anything approaching that kind of fortitude. His deepest conflict right now is whether to let himself grow colder still toward the unfortunate souls he must visit (on the way to one last-minute Ikigami delivery, he asks his driver to make a stop at the video store so that he can avoid paying a late fee) or whether he should try to discover some philosophy of life and death that he can use to help heal their pain. This is the extent of what he can manage emotionally at this point.

I found the individual stories in this volume even more compelling than those in the last, which is certainly something that will keep me reading. I do hope the story will find a new direction to explore before the manga’s current formula becomes tedious, as it undoubtedly will should it continue on like this much longer. For the moment, however, what is offered here is more than enough to keep readers engaged. Ikigami continues to be a fascinating and well-told story with fantastic art to match.

Volume two of Ikigami: The Ultimate Limit will be available on August 11th, 2009. Review copy provided by the publisher. Click here to read my review of volume one.