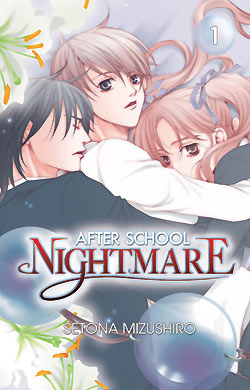 Just now I’ve posted a review for the first volume of Setona Mizushiro’s After School Nightmare over at Comics Should Be Good! This is a series I keep hearing good things about, and my experience with the first volume certainly backs that up. I’ve always been fascinated by dreams, so just the premise was enough to get me hooked, but the story’s rich characters and fantastic art make it even more compelling. This review gets special mention over here, because I’m keen to add this volume to my “Recently Recommended” sidebar widget, that’s how much I enjoyed it. Please head on over and check out my review! (Reprinted here after the demise of CSBG)

On a somewhat related note, congratulations, also, to everyone over at CSBG’s parent site, Comic Book Resources for its Eisner win last night! 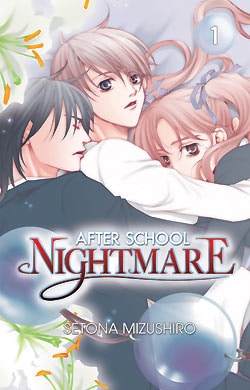 Everybody has some kind of secret, though Ichijo Mashiro’s is bigger than most: he was born with a male upper body and a female lower body, something he has successfully kept from his peers for his entire life. Unfortunately, this secrecy can’t last once his school enrolls him in a special after-hours “class” in which he is placed into a shared nightmare with other students. In the nightmare, the students are reduced to their “true forms,” revealing their worst fears and deepest wounds to each other. One student, for instance, appears in the dreams with gaping holes in place of her face and chest, while another appears in a full suit of armor. Yet another appears as a pair of endless, disembodied arms. Unlike the others, Ichijo’s true form looks exactly like himself, only dressed in a girl’s school uniform.

In order to graduate from the class, the students must obtain a mysterious “key” which any of them might carry, and in order to do so, the students consistently try to destroy each other within the dream. The students’ individual class sessions are limited by a cord with three beads on it that appears around their necks. When a student’s heart sustains damage (such as through extreme shock or pain) the beads break one by one. Three broken beads indicate failure, at which point the student wakes from the dream and is dismissed until the next class. It is clear that in order to graduate from the class, there is something each student must overcome, but no direction is given to them regarding how to do that or even exactly what it is.

Ichijo’s gender conflict is obviously the center of his own fear and it is fascinating to watch that explored in this volume. As the story begins, he experiences his first menstruation cycle which shakes his long-time identification as male and seems to be the catalyst for his initiation into the after school class. His loathing of his own body is paramount. “You’re not distorted at all, Mashiro-kun,” another student says to him after his first class, “even from the bottom of your heart.” “She’s wrong,” Ichijo says to himself. “This body I walk around in is the most distorted thing of all. That’s why I didn’t turn into anything else in that dream. Because this body is uglier than anything I know.” His personal struggle is complicated further by romantic attention from two of his fellow students–Kureha, a girl who was sexually molested as a child and now fears men (except for Ichijo, whom she now sees as “safe,” thanks to his female sexual organs) and Sou, a boy with a reputation as a womanizer in his class who has secretly harbored feelings for Ichijo all along, believing him to be male.

The issues of gender identification and sexuality addressed in the series are really compelling overall, though it’s hard to tell at this point just what the author is trying to say about them. It is clear that Ichijo associates being male with strength and being female with weakness which is a significant part of why he is so determined to live as male, but his ideas are being challenged from all sides which is terrifying for him but quite thrilling for the reader. These issues are not the entire focus of the story, however. For instance, one of the most interesting things about Ichijo, is that he is apparently the only student (in his current class, at least) to have ever tried to save another student during the nightmare–something which most of the other students see as extremely foolish.

The story’s supporting characters are at least as fascinating as Ichijo, though still somewhat mysterious at this point. Their personal scars are deep and their positions with each other terrifyingly vulnerable, both inside and outside of the nightmare, now that those scars are being openly displayed to each other day after day. Some of the students appear in such distorted forms during the dreams, it’s impossible to tell who they are in real life, but a few of their identities are revealed in this volume and that will probably continue as the series goes on. The emotional intimacy forced upon them during the dreams really is every teen’s nightmare and though the full implications of that have yet to be explored, it’s something I’m anticipating eagerly as a reader. There is so much rich material here to work with, I can only hope the series follows through.

Mizushiro’s art is a true highlight, especially during the nightmare sections which are genuinely creepy. This volume has a somewhat sparse look overall, with a restrained use of tone and a nicely crisp feel which adds to the tension of the story. The volume begins with a short section of genuinely beautiful color pages, the last of which is a poignant illustration of Ichijo standing in the shower, horrified by blood that has trickled to his feet, lending the series strong emotional resonance from the start.

After School Nightmare‘s tenth and final volume was released by Go!Comi in February of this year, making the full series available to English-speaking readers. Its strong art and compelling characters help to create a genuinely stunning first volume and this is a series I’ll definitely be continuing as quickly as I can.