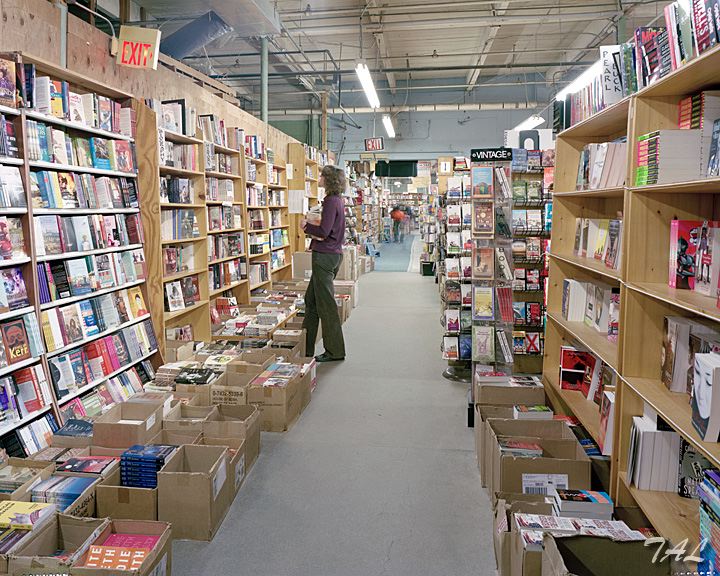 Now, of course, there are plenty of places one can find cheap books, both on- and offline. But when I have the urge to browse, I find the New England Book Fair worth the trek from Boston to Newton Highlands, even though very little about this venerable institution has changed in 30+ years. (Translation: no Starbucks, no muffins, no comfy reading chairs. The New England Book Fair is still a minimalist shopping experience, as befits its Yankee roots.)

Part of the Book Fair’s appeal is its selection; its enormous facility is positively stuffed with cookbooks, academic tomes, bestsellers, coffee table books, classics, mysteries, Choose Your Own Adventures, graphic novels, reference books, picture books, and travel books — in short, just about any book in print as well as many obscure and out-of-print titles. Although the Book Fair carries titles by smaller manga publishers — CMX, Go! Comi, Vertical, Inc. — its real strength lies with Del Rey, Viz, and Tokyopop. You’ll find a robust inventory of older and newer series, from the latest volume of NANA to out-of-print series like The Big O, Flowers & Bees, Harlem Beat, and Please Save My Earth. (On one excursion, I even found volumes of Mai the Psychic Girl, though Mai was gone when I returned a few weeks later.) New manga appear on Book Fair shelves around the same time they arrive at Barnes & Noble and comic retailers, so you can pick up the latest volume of Pluto or Parasyte along with the third volume of Tuxedo Gin.

The other part of the Book Fair’s appeal is pricing. New books are discounted between 20 and 40%, remainders as much as 80%. (The sale rooms are a real trap for bargain-hunting bibliophiles; I’ve gone to the Book Fair with the intention of buying one or two titles and emerged hours later with an armful of books.) The Book Fair has even taken a page from its competitors’ playbook, offering a frequent buyer reward program. Snag a card, and with each $30 purchase, you’ll be one step closer to earning a $20 gift certificate.

One final tip: if your comic habit extends to American creators such as Adrian Tomine, Alison Bechdel, or good ol’ Charles Schulz, you’ll find a small but well-stocked graphic novel section in the same area of the store. (N.B. Many of Vertical’s titles are shelved with Buffy the Vampire Slayer and American Born Chinese.) You’ll also find an “Asian interest” display that features some of Vertical’s prose translations (e.g. A Rabbit’s Eyes, Shinjuku Shark, Now You’re One of Us), as well as books by Haruki Murakami. Both the graphic novels and “Asian interest” section are located at the far end of the store, next to the children’s books.

DIRECTIONS: BY CAR
Take Route 128 to exit 19A onto Highland Avenue. The Book Fair is approximately 1.5 miles from the exit on the right-hand side. Click here for a detailed map of the area.

DIRECTIONS: BY PUBLIC TRANSIT
Take the Green Line (D Train/Riverside) to Newton Highlands. At the Newton Highlands stop, exit and walk to Walnut Street. Take a left onto Walnut and cross over the tracks. At Centre Street, take a right. Cross under Route 9. Centre Street becomes Winchester Street. Take Winchester Street to Needham Street. The New England Mobile Book Fair will be on your left. (Note: distance from T stop is approximately one mile.)

This is an expanded version of an article I posted at PopCultureShock in 2008.