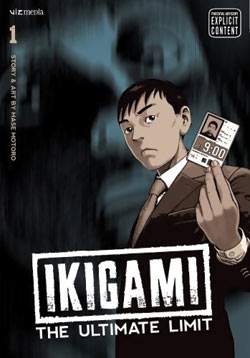 “Obedience is the key to happiness,” proclaims the government of this manga’s dystopian society–a tenet upheld by the National Welfare Act, a law that dictates standard immunizations for every first grader in the country (a country that greatly resembles modern Japan). What is special about these immunizations is that approximately one in one thousand of them contains a tiny capsule that settles itself in the recipient’s pulmonary artery. Then, on a pre-determined date sometime between the affected citizen’s eighteenth and twenty-fourth year, the capsule ruptures, killing the person instantly. Because nobody knows who has received a capsule, the law is said to make people value life more and conduct more productive lives, ever mindful of the shadow of death.

Anyone who opposes the law is injected with the capsule, as Fujimoto, the series’ protagonist, witnesses for himself on the first day of training for his new job. Fujimoto’s job is as a Messenger–a government employee responsible for delivering ikigami or “death papers” to those who are destined for government-mandated death, informing them of the exact date and time of their unfortunate fate. The ikigami are delivered to the person’s residence precisely twenty-four hours before the appointed time so that the individual may decide how to spend the last twenty-four hours of his or her life–one of the primary subjects of this volume. In the final chapter, Fujimoto’s manager explains to him, “Depending on how a person lives their last day, the ikigami can be a death sentence, or an invitation to really live,” and though on the surface, this might seem to make sense, it also highlights the most problematic philosophy presented in the story.

Fujimoto delivers two ikigami during the course of this volume, one to a store checkout clerk who is haunted by his past as a target of his former schoolmates’ intense bullying, and one to a musician just on the brink of artistically unfulfilling commercial success. The most interesting portions of this volume are the stories of these two young men and their individual reactions to receiving an ikigami. Though their choices in the last twenty-four hours of their lives seem quite different on the surface–one turns to revenge, the other to liberation–both are acting on their deepest regrets, and it is this that is the great tragedy of Ikigami.

Despite the government’s insistence that the National Welfare Act helps people value their lives, to a great extent this only seems to happen in these young men’s final moments, which begs the question of whether or not the “obedience” these people are so proud of is actually just the product of plain, ordinary fear, so deeply ingrained into their way of life that it is maintained unconsciously, with little thought given to its cause. After all, appreciating life and fearing death are not the same thing. Giving this very well-plotted manga its due, however, it seems quite likely that this could end up being the point, as by the end of the volume Fujimoto is clearly having non-government-approved thoughts about his role in all this, and there are enough hints throughout the book to suggest that he may not continue to walk the straight-and-narrow.

Everyman Fujimoto is the perfect guide to take readers through this grim world–part Death Note, part 1984 (though more starkly real than either of them). It is the government that is the serial killer in this story, doling out doom with a tight, corporate smile while failing to recognize (let alone address) the real suffering of its constituents.

That Yosuke Kamoi, the young man whose school years with a group of bullies left him permanently disfigured, could have lived the life he did in this “obedient” society, proves just how little part the government plays in people’s day-to-day lives. Yosuke lived his life tormented by his peers, with his negligent Big Brother only stepping in to deliver the final blow. For most of these people, the ikigami is something that happens to others–distant, anonymous people who have nothing to do with their lives. Despite the government’s best efforts, the darkest oppressor hanging over these people’s daily existences is that which they create for themselves and for each other. It is this that makes Ikigami feel so real and enhances its sense of horror.

Mase’s art is bold, stark, and heavy on contrast, effectively portraying the bleak reailty of its world. The characters’ faces are wonderfully expressive and specific, with a level of nuance one might expect from live actors, and the character designs provide the detailed realism found primarily in seinen manga.

This manga is smart, compelling, often chilling, and relentlessly dark though never for its own sake. With its fascinating concept, tense storytelling, and sharp, clean art, Ikigami is a real page-turner–impossible to put down through the very last panel.