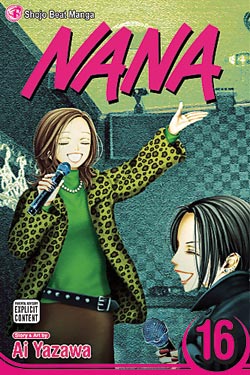 Aside from the Search business and the drama over Misato number two, this volume is not especially plotty, but don’t be fooled, there is a lot going on. As Nana and Ren fall further apart, he asks her very bluntly, “Would you be happy if I left Trapnest and didn’t go to London? Would you be happy if Hachiko got an abortion and broke up with Takumi? Would you be happy if Yasu stayed single and by your side for the rest of your life?” Nana is saved by the bell (literally) from answering but the truth is clear, and though she tries to take this realization as an opportunity to reach out to Hachi at her birthday party, all she really ends up doing is distancing herself more. Even without much solid information to fill in the gap between this time and the “future” we’ve only yet glimpsed, it is easy to see already how little it would take for Nana to completely crumble. Her need to maintain the complete devotion of those dearest to her (Hachi, Yasu, and Ren) while offering them very little of her true self in return just isolates her more and more as she is completely unable to accept them in the context of their real lives.

Also revealed in this volume is a bit more detail on Mai’s connection with Nana’s past, which is actually much more intriguing than the story of the real Misato by itself. Mai is such a guarded character but also incredibly sincere which is a fascinating combination that makes me yearn for more information. She’s a character it took me a very long time to warm to, but now she’s one of the most fascinating of the bunch. She also finds herself in a difficult position as Blast’s manager when she must attend a meeting with television executives who want to put Nana in a TV drama, something which Mai knows that Nana has no interest in whatsoever. As the members of Blast get pulled further and further into the corporate net, it is honestly painful to watch, both for the reader and for the other characters who care for them.

The big treat of this volume is the Nobu side story included in the back, which details his childhood and how he came to love the guitar, as well as the beginnings of his friendship with Nana. I can’t lie, Nobu is my favorite character in the series, so there is no doubt that I’m biased, but I found this side story to be riveting and extremely revealing. One thing that isn’t focused on much in this series is Nobu’s songwriting, which is understandable considering how much is going on, but both the main volume and this side story bring this up a bit, much to my delight. Also, it’s difficult to put aside the notion that Nobu really belongs with Hachi, and this volume doesn’t help at all. It is poignant, too, to see a younger, more obviously fragile Nana in Nobu’s past, providing a deeper understanding of the extent to which she is broken now.

There are few series I consume as rabidly as I do NANA, and every volume reminds me of exactly why. Ai Yazawa’s unique art, fantastic storytelling, and intense insight into the human mind and heart are second to none.

Volume sixteen of NANA is available on May 5th, 2009. Review copy provided by Viz.