Your & My Secret, Vol. 1
By Ai Morinaga
Published by Tokyopop 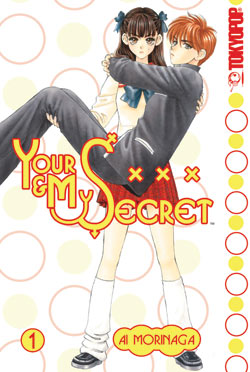 This story could so easily be either stupidly fluffy or completely offensive, but it instead offers a fun, insightful look into traditional gender roles, teenage sexuality, and the precarious line between friendship and love. Both Akira and Nanako find that people respond to their personalities more positively in bodies of the opposite sex. Akira’s quiet sweetness and accommodating impulses, previously labeled as weak, are perceived as desirable, ladylike qualities when people think he’s a girl. Likewise, Nanako’s aggressive manner and bluntness are considered “manly” in Akira’s body, winning over even Akira’s parents who were apparently worried he might never become a man. The scene where Akira discovers this is honestly heartbreaking, even through the humor of it, and though it is fun to watch Nanako (who is obviously relieved by the sudden opportunity to be herself), Akira’s feelings add another level to the story that I very much hope to see further explored in the subsequent volumes.

Similarly, while it is wonderfully funny (funny because it’s true!) that the first things these characters think about doing in their new bodies is checking out their sexual organs (Nanako, of course, accomplishes this within the first few minutes), it also brings up the question of the potential consequences involved, particularly when Akira discovers that Nanako has robbed him of his own “first time.” Both characters find themselves romantically entangled with their (same-sex) best friends now that they are in bodies of the opposite gender, and that opens up a whole world of questions for each of them, though they both react very differently to the situation. Nanako barely stops to think at all as she barrels forward with her feelings in the moment, while Akira spends so much of his time feeling hurt that his best friend would go after the girl (or at least the body of the girl) who he openly crushed on that he pretty much ignores every other feeling aside from a few fleeting thoughts over what a good kisser Senbongi is.

Everything in the story has both the potential to be hilariously funny and shockingly deep all at once, and though the focus on humor keeps things enjoyably light, everything else is just there under the surface, promising rich things to come. Having rescued the series from ADV, Tokyopop has release four volumes of Your & My Secret so far, with the fifth scheduled for release in May. With so much promise in just the first volume, this is definitely a series I’ll be hurrying to catch up on!