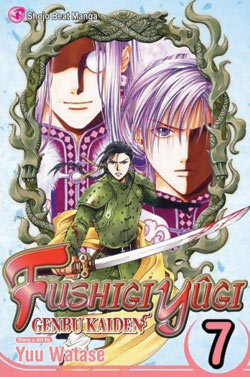 Set as a prequel to Yuu Watase’s classic shojo series, Fushigi Yûgi: Genbu Kaiden follows the story of the first priestess of the Fushigi Yûgi universe, Takiko Okuda. When Takiko’s long-absent father returns home too late to save her dying mother, Takiko is determined to tear her father away from the work that alienated him from his family—the translation of a Chinese text, “The Universe of the Four Gods.” As she attempts to destroy the book, she is instead sucked into its story, where she becomes the Priestess of Genbu, who must bring together the seven celestial warriors to save the new world she has become a part of. Feeling rejected by those she left behind, Takiko quickly embraces her new destiny, discovering both her own strengths and a place for herself in a world where she feels truly needed for the first time in her life.

In volume six, the fearsome Hagus was revealed to be one-half of the final celestial warrior, Urumiya. Hoping to save Uruki from being murdered by Hagus’ hand, Takiko vowed to rescue his twin brother, Teg (Urumiya’s other half), who has been kept captive his whole life by Uruki’s father, King Temdan. In this volume, Takiko and Uruki’s vassal, Soren, must escape Hagus and King Temdan’s troops, while the warriors face down fire, bandits, and the Qu-Dong army. Everyone seems doomed to be apart from those most important to them, including poor little stone warrior Namame whose head is still separated from his body. Takiko and her warriors are eventually reunited, but only after one of their group makes a horrifying sacrifice.

This is an intensely emotional volume that shows off all the best elements of this series. The chapters are action-packed, but none of it is remotely superfluous. Every moment is meaningful, and there is not a single unnecessary word or gesture in the entire volume. Up until now, the story had been a well-written adventure and a satisfying romance, but this volume really demonstrates the maturity of Watase’s writing at this point in her career. The intensity of the relationships feels natural and well earned, and even the less-developed characters are rich enough at this point to carry off some deeply emotional moments.

Visually, this volume is especially strong as well. The battle scenes achieve a clarity that was lacking in some of the earlier volumes, and the faces and body language of Watase’s characters are more expressive than ever. It is a testament to Watase’s strengths as a visual storyteller that even the expression on the face of a character who is literally made of stone is enough to bring tears to the eyes.

With its strong, compassionate heroine and eclectic cast of supporting characters, Fushigi Yûgi: Genbu Kaiden brings the best elements of the world of Fushigi Yûgi to a new generation of manga fans.