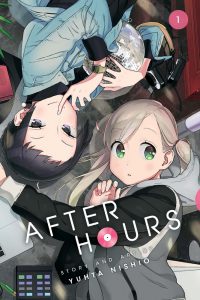 In the opening scene of After Hours, Emi Asahina is attempting (unsuccessfully) to meet up with a friend in a loud and crowded nightclub. After a spunky DJ named Kei saves her from a grabby creep, they get to talking. Emi tells her, “I don’t really see what’s fun about places like this.” Much of the rest of the manga is Kei helping her to change her mind about that.

Emi ends up going home with Kei that night, and they appear to have fooled around to some extent, though that’s left to the reader’s imagination. Instead, the focus is on Emi learning more about Kei’s world. The club scene is a new setting for me where manga is concerned, and imparts a unique feel. Emi is 24 and unemployed and she doesn’t know what she wants to do with her life, but after once getting roped in to providing visuals to accompany Kei’s music, she’s enthusiastic to try it a second time. Kei swiftly provides Emi the key to her apartment, and tells her things about her past that she usually doesn’t talk about, gives her records from her prized vinyl collection, etc. For all of her cool chick persona, Kei is open and honest and pretty awesome. And so, I’m kind of afraid she’s going to get her heart broken.

Because although Emi is having fun with Kei, there’s never really a sense that she’s choosing Kei as opposed to just sampling her lifestyle. After they maybe sleep together, there is not a single scene from Emi contemplating what this might mean about her sexuality. And, at the halfway point of the volume, we learn that she is living with the boyfriend she’s only “kind of” broken up with, and Kei has no idea. Is Emi going to make a decision about what she wants from life that will include Kei, or is this just tourism for her? Granted, the manga itself isn’t amping up the potential for drama here, so perhaps it will all play out in the relatively restrained way it has so far.

One thing I really liked about this volume was a scene in which Kei is showing Emi how to operate some DJ equipment. She explains how the inputs from two separate turntables can be adjusted to mix and segue into each other. Later, this metaphor is applied to their relationship. Kei is sharing a lot while Emi is revealing little. “If it’s all coming from my side, it’s not really mixing, is it?” she says. I thought that was a pretty neat idea. Really, my one complaint so far is that the characters look so young. Kei is supposed to be thirty, but looks fourteen. She still comes off as a vibrant and captivating, but I think her cool quotient would increase if she looked more like an adult.

After Hours is complete in three volumes. The second is due out in English next week. 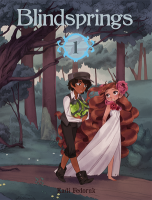