I was on vacation last week, much of which was spent in the middle of the woods in the middle of Ohio camping with my family. This meant I had very little Internet access. But even so, I did manage to post two reviews last week. My monthly horror manga review project continued with a review of After School Nightmare, Volume 4 by Setona Mizushiro. This was the first volume in the series that I hadn’t previously read before embarking on the review project. The second review was of Satoshi Wagahara’s prize-winning light novel The Devil Is a Part-Timer!, Volume 1 which is very amusing and silly. But, having watched the anime series last year, I already knew that.

As previously mentioned, I was occupied with other things last week, so I probably missed out on all sorts of interesting reading, news, and announcements. However, there were a few things that came across my radar before I left for Ohio. Kathryn Hemmann at Contemporary Japanese Literature wrote about The Cultural Cross Pollination of Shōjo Manga. And speaking of shōjo manga, Digital Manga’s most recent Tezuka Kickstarter is aiming to publish Storm Fairy. (The project also aims to reprint Unico with better image and color quality, which makes me wonder why Digital Manga didn’t do that for the first printing, but I’ve given up trying to understand Digital Manga’s decision making.) Finally, Udon Entertainment announced a new manga license: Shuji Sogabe’s adaptation of Persona 4.

Attack on Titan: Junior High, Omnibus 3 (equivalent to Volumes 5-6) by Saki Nakagawa. Out of all the various Attack on Titan spinoffs, Junior High is the one that probably has the smallest audience overall and is the one that is the most uneven for me specifically. Sometimes the manga can be a slog to get through, but sometimes it’s absolutely hilarious. At its best, Junior High can actually make me laugh out loud; I keep reading the series for those moments because when Junior High is funny, it is very funny. The manga continues to be a very weird mix of Attack on Titan and a generic school setting with all of the standard tropes that that entails. Sometimes the combination works better than others. This particular omnibus features the school culture festival, a battle of the bands, eating contests and cooking competitions, club activities, lots of cleaning, and school rivalries among other things. I was very pleased to see that characters and storylines from other Attack on Titan spinoffs like No Regrets are now being incorporated into Junior High as well.

Lies Are a Gentleman’s Manners by Marta Matsuo. Since for whatever reason Digital Manga often seems to be hesitant to include “Volume 1” in the title of a new manga, I didn’t initially realize that Lies Are a Gentleman’s Manners is actually an ongoing series in Japan. The first volume stands well enough on its own, but I do hope that any subsequent volumes will be licensed as well. Despite the fact that neither of the leads in this boys’ love manga are particularly likeable—Jonathan, an unscrupulous medical student selling drugs to his fellow classmates, and Paul, his equally unscrupulous (and married) college professor who uses that fact to blackmail him into a relationship—I actually do want to read more. Though some of the situations are unquestionably unsavory, the manga can also be very funny and even sexy on occasion. One of the most interesting things about Lies Are a Gentleman’s Manners is its setting. The manga takes place on America’s modern East Coast among the country’s wealthy, aristocratic upper class. While certainly a fictional representation, some of the social dynamics ring true. 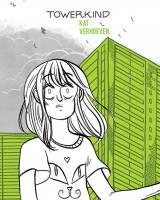 Towerkind by Kat Verhoeven. Originally self-published as a series of mini-comics, Towerkind was recently collected and released by Conundrum Press in a single volume. I was not previously familiar with Verhoeven’s work; Towerkind was a TCAF-inspired impulse buy. I’m very glad that I picked it up though because I’m loving this comic to pieces. Towerkind certainly won’t be to everyone’s liking, but there’s just something about the comic that I find oddly compelling. It’s surreal, strange, chilling, and ominous. Verhoeven effectively uses a small format to create a claustrophobic atmosphere that emphasizes the feeling of impending doom experienced by the characters. The volume opens with a foreword by Georgia Webber explaining the importance of the backdrop of Towerkind—Toronto’s first vertical neighborhood of high-rise apartments St. James Town—which helps to set the stage and tone for the comic itself. Towerkind follows a group of children gifted with unexplainable supernatural abilities who live in the towers of St. James Town while what may be the end of the world approaches.

Happy June, everyone! I’ve been super busy (I seem to say that a lot, don’t I?) but was still able to post a few things here at Experiments in Manga last week. The winner of the Ema Toyama Twosome manga giveaway was announced. That post also includes a list of manga available in English that feature novelists and other writers. The honor of the first in-depth manga review for the month of June goes to Masayuki Ishikawa’s Maria the Virgin Witch, Volume 2. Ishikawa seems to be trying to do a lot with such a short series (it’s only three volumes), maybe a bit too much. Even if he’s not able to successfully pull everything off, I still find Maria the Virgin Witch to be an intriguing series and want to read the rest of it. Finally, over the weekend I posted the Bookshelf Overload for May. I had a pretty big haul of manga and comics last month; I largely blame TCAF.

Elsewhere online there’s been some interesting reading to be found. Justin interviewed Kate Dacey (aka The Manga Critic) over at Organization Anti-Social Geniuses. Kate was one of my biggest manga blogging inspirations, so I’ve been very happy to see her recent return. Sean Kleefeld brought my attention to a panel on the history of manhwa. Drawn & Quarterly recently released the massive anthology Drawn and Quarterly: Twenty-Five Years of Contemporary Cartooning, Comics, and Graphic Novels. Joe McCulloch specifically looks at the volume’s manga content. Mangabrog has a translation of a conversation between Naoki Urasawa and Hisashi Eguchi. Last but not least, two licensing announcements were made last week that I’m very excited about: Viz Media is finally releasing a print edition of One-Punch Man by ONE and Yusuke Murata and Drawn & Quarterly is releasing more of Shigeru Mizuki’s GeGeGe no Kitaro! (I loved the publisher’s first Kitaro collection.)

Welcome to the N.H.K., Volumes 1-4 by Kendi Oiwa. Originally published in print by Tokyopop, Viz Media recently announced that it would be releasing Welcome to the N.H.K. digitally in the very near future. Tatsuhiko Takimoto’s original Welcome to the N.H.K. light novel was fantastic and I thoroughly enjoyed the anime adaptation, too. It was only a matter of time before I read Kendi Oiwa’s manga adaptation, though I am a little surprised that it’s taken me this long to get around to it. It has been a while since I’ve read or watched the other versions of Welcome to the N.H.K., but so far the manga is closer to the anime than it is to the novel, except that it seems a little more streamlined and perhaps even a little raunchier. Satou is a college dropout and hikikomori who has been targeted by Misaki, a young woman who is determined to rehabilitate him despite her own oddities and personal issues. In some ways, the more recent Watamote is reminiscent of Welcome to the N.H.K. Both series feature protagonists who are extremely socially awkward and both series can be hilarious, but they can also be somewhat depressing and painful to read at times, too. But, I am enjoying the manga version of Welcome to the N.H.K. a great deal.

xxxHolic: Rei, Volume 3 by CLAMP. Initially, I felt that it wasn’t necessary to have read xxxHolic in order to enjoy xxxHolic: Rei. However after reading the third volume, I feel I need to revise that opinion. It’s still not absolutely necessary to have read xxxHolic, but Rei makes a lot more sense and is much more meaningful if a reader has that background. I’ve actually not finished reading the entirety of xxxHolic, so while I was able to get the basic gist of what was going on in Rei, I did feel I was missing out on some important context while reading the third volume. However, I really like what CLAMP is doing with the series and I’m looking forward to reading the part of xxxHolic where Rei ties in directly. Rei has developed a marvelously ominous atmosphere that has a surreal, dreamlike quality to it. CLAMP’s high-contrast artwork in the series is great, too. At first, Rei felt directionless as though CLAMP didn’t really know what to do with the series, but the third volume begins to bring everything together in a way that actually makes sense. Of course, this also means the Tsubasa: Reservoir Chronicles connection is becoming more pronounced as well, which can sometimes feel forced.

Ze, Volumes 7-9 by Yuki Shimizu. Despite it being a series that I tend to enjoy, it’s actually been a few years since I’ve read any of Shimizu’s supernatural boys’ love manga Ze. Although there is some dubious content (which doesn’t really surprise me much at this point), these three volumes reminded me what it is about Ze that I like so much: Shimizu has a knack for creating fascinatingly intense and complex relationship and power dynamics. The seventh and eighth volumes explore the backstories of Kotoha and Konoe; I was very satisfied with the explanation of their peculiar relationship and personalities. (Granted, most of the characters and relationships in Ze are pretty strange.) Ze, Volume 8 focuses on Shoui and Asari. Most of the story arcs have been two volumes long, but perhaps because their relationship has been developing in the background over the course of the series, the eighth volume is the only one specifically devoted to the couple. These three volumes are also very important in setting up the next and what I believe is the final story arc which will reveal more of Waki’s tragic history. I had forgotten how much of an asshole he can be, so I am curious to find out what made him the person he is.