Last week was a relatively quiet week at Experiments in Manga (granted, that’s true of most weeks these days), but the winner of to Tokyo Ghoul giveaway was announced. The post also includes a list of some of the manga available in English which feature half-humans of one type or another. Elsewhere online, there were plenty of interesting things posted: Massive and gay manga were featured at Edge Media Network, and it sounds like we should be seeing more of Jiraya’s work in English later this fall; Alice Nicolov wrote an article on queer representation in manga for Dazed and Confused Magazine; Nami Sato, the creator of Haven’t You Heard? I’m Sakamoto was interviewed for the first time in either English or Japanese; and Publishing Perspectives posted some of the highlights of a conversation with Allison Markin Powell and Hiromi Kawakami about Japanese literature translation. Also, the Kickstarter project for Power & Magic, a queer fantasy comics anthology about witches of color (which looks like it should be fantastic), was recently launched.

Attack on Titan: Before the Fall, Volume 8 written by Ryo Suzukaze and illustrated by Satoshi Shiki. It’s been a while since I’ve read Suzukaze’s Before the Fall light novels so I may be misremembering, but the novel adaptation seems to include characters and storylines not found in the original. It also expands on some of worldbuilding and characterizations of the franchise as a whole, so readers interested in the most comprehensive Attack on Titan experience will want to read the manga even if they’ve already read Suzukaze’s novels. Sharle, while still managing to come across as a stereotypical maiden in distress at times, is a more well-rounded and independent character in the manga. Her brother plays a more prominent and slightly more sympathetic role as well although he’s still one of the main human antagonists (and an ass). The Titans actually don’t even make an appearance in this volume and are barely mentioned as the manga focuses on the conflict and intrigue among the military, political, and religious factions. Overall, it’s an exciting volume with some interesting twists. Unfortunately it suffers some from Shiki prioritizing cool-looking panels and scenes over continuity and logical plot developments. (I’m sorry, if someone is going to daringly scale a wall to sneak into a city, they really shouldn’t be attempting the maneuver above the few guards that are present unless there’s a good reason for it.)

Devil Survivor, Volume 6 by Satoru Matsuba. I wasn’t especially enamored with the first volume of Devil Survivor and so haven’t really been following the manga very closely. However, the series had potential, and I’m glad to see that the sixth volume delivers on that promise. The Devil Survivor manga is based on a video game in the Shin Megami Tensei franchise, one of many adaptations from the megaseries to have recently been translated in English. Probably my biggest criticism of the first volume of Devil Survivor was that it read too much like a video game and not enough like a manga. If the sixth volume is anything to judge by, the series has greatly improved in that regard. While the video game elements are still readily clear, the manga seems to be focusing more on plot and characters. I actually really like the underlying story and find some of the characters to be interesting as well. The artwork is serviceable, understandably keeping close to the designs of the video games, but the way Matsuda draws the more well-endowed women can be a bit awkward to say the least. Many of the demons invading Tokyo look pretty good, though. The sixth volume is a turning point in the story as the series enters its final arc. Important revelations are made, a major boss battle is fought, and already dangerous situations become even more dangerous as the characters prepare to do all that they can to survive and save Tokyo from destruction. 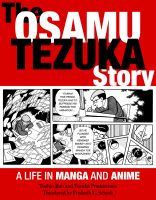 The Osamu Tezuka Story: A Life in Manga and Anime by Toshio Ban. While I certainly understand why Stone Bridge Press chose to release the entirety of The Osamu Tezuka Story in a single volume, the book is huge, amounting to over nine hundred pages of material. Most of the volume consists of Ban’s manga, but it also includes an excellent introduction by the translator (and friend of Tezuka) Frederick L. Schodt and one of the most exhaustive lists of Tezuka’s work that I’ve seen in one place. I’ve read my fair share of works examining the life and career of Tezuka so I wasn’t especially surprised by anything in the manga, but The Osamu Tezuka Story provides one of the most comprehensive, engaging, and accessible biographies. The manga, which is largely chronological, is divided into three parts which delve into Tezuka’s childhood, his entry into manga, and the expansion of his career into anime. Commissioned following Tezuka’s death in 1989, the biography incorporates many of Tezuka’s own words taken from his essays and earlier interviews. Ban, who was one of Tezuka’s sub-chiefs in the manga department, adopts an illustration style very similar to that of Tezuka and excerpts from some of Tezuka’s manga and anime are also used. The Osamu Tezuka Story reveals just how remarkable and influential a creator Tezuka was and is highly recommended for anyone interested in the history of Japan’s manga and anime industries.

Our Little Sister directed by Hirokazu Kore-eda. I’m not sure when (or if) Our Little Sister will receive a home video release, but I recently had the opportunity to see the film in a theater. Our Little Sister is actually a live-action adaptation of Umimachi Diary (the title more literally translates to “Seaside Town Diary”), an award-winning ongoing manga series by Akimi Yoshida who some will likely recognize as the creator of Banana Fish. I’ve seen one other film by Kore-eda (Like Father, Like Son) which is similar in both theme and tone to Our Little Sister. Both films, despite intense interpersonal drama, are fairly quiet and gentle without becoming saccharine and focus on the complexities of familial relationships. In the case of Our Little Sister, the story primarily follows three sisters whose father left their mother for another woman more than fifteen years ago and whose mother largely left them behind to be raised by their grandmother. After their father dies they meet their half-sister, the daughter of his second wife (out of three), for the first time while at the funeral. For a variety of reasons, they invite her to live with them. While this does cause some raised eyebrows and strain in the family, both immediate and extended, the decision is ultimately a healing one as all four sisters grow closer as they pull together their fragmented lives. Our Little Sister is simply a lovely film. (And I’d certainly be interested in reading the original manga, too!)