to the beautiful you

There’s a particular type of excitement that grips a manga fan when they find out about an upcoming live action adaptation of a favorite manga. Will the latest version be inspired or insipid? I had high hopes when I found out that a new Korean drama version of one of my favorite manga, Hana Kimi, was in production. Fortunately for the most part I wasn’t disappointed. The entire series of To the Beautiful You is available for streaming on Hulu and Dramafever. 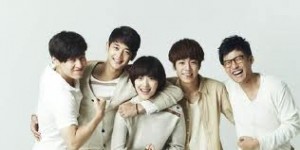 Clearly, these are all boys

For those of you unfamiliar with the Hana Kimi manga, I’ll provide a brief summary. Mizuki lives in the US, but decides to return to Japan, disguising herself as a boy and enrolling in an exclusive all-boys school in order to get close to her long-time track and field crush, Sano. Like many shojo heroes, Sano is tormented by his past and thus is currently struggling with his high jump. He’s disturbed when he gets assigned a new odd transfer student as his roommate, and his orderly and somewhat solitary life is about to get shaken up dramatically. Hana Kimi the manga explores the romance between Mizuki, who is determined to bring Sano back to high jumping glory. Comically enthusiastic soccer player Nakatsu finds himself falling for the new boy at school and starts questioning his sexuality, while Sano sees through Mizuki’s disguise fairly easily but keeps his knowledge to himself as Mizuki’s kind and energetic personality slowly starts to win him over. Hana Kimi is one of the manga that cemented my addition to shojo, and to this day I still have an irrational affection for cross-dressing reverse harem stories.

When adapting the manga for Korean drama format, there were several choices that I thought really made sense in driving the story forward, even though some of the plot points diverged a bit from the manga. In To the Beautiful You, the Sano character Tae Joon is a high jump champion, but he’s also a celebrity with an agent and issues with endorsement deals. It makes a lot more sense for Tae Joon to be a mini-celebrity when Jae Hee (Mizuki) sees him on TV in California and promptly decides to move to Korea to be near him. In the Hana Kimi manga, I just assumed that Mizuki only had a very odd attachment to track and field. I don’t think it is possible for a Korean drama to air without a slightly evil second lead girl to serve as an antagonist for the main character. The second lead girl in To the Beautiful You is Ha Na, a rhythmic gymnast who is also signed to Tae Joon’s agency. Ha Na is pretty much exactly what one would expect from a second lead girl, although she does put her gymnastics abilities to work in interesting ways whenever she decides to infiltrate the boys’ school to spy on Tae Joon. 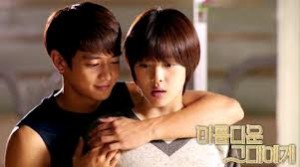 Platonic roommates, just hanging out the way guys do.

Hana Kimi the manga dealt with the love triangle between the three characters, but it did so against a backdrop of slice of life school antics in a boarding school with dorm-based rivalries between groups of jocks, martial arts trainees, and drama geeks. There’s a large extended cast in Hana Kimi, and for the most part the emphasis in To the Beautiful You is on the love triangle only, and many of the supporting cast members are either not present, combined into one character, or seldom seen. This aspect of the manga is referenced in a couple episodes where the three dorm leaders have to come together in conference. It makes sense that a TV version of the story would opt for a more intimate plot focusing on fewer characters. One big change is in the character of Dr. Umeda, who is no longer the fabulously gay man he was in the manga version. The doctor in To the Beautiful You is quirky in his own way, but Umeda was such a standout character in the manga that I missed him quite a bit. 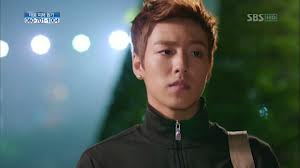 Cheer up, Eun Gyul, the boy you loved might have turned out to be a girl but at least your haircut has improved.

The acting in To the Beautiful You is for the most part fine, although Eun Gyul (Nakatsu) seems to be channeling the character Jeremy from You’re Beautiful in the first few episodes. This isn’t helped by the fact that they have almost identical haircuts. Minho does a good job contrasting Tae Joon’s closed-off personality before Jae Hee enters his life with the more open and expressive person he becomes after spending time with her. One storyline where I thought the drama had a bit of an edge over the manga was showcasing Eun Gyul’s reaction to finding out the truth behind Jae Hee’s disguise. In the manga I always thought that there should be more emotional fallout from the revelation and since Korean dramas tend to go for the crying scenes whenever possible, I thought that Eun Gyul’s storyline was handled better over several episodes as opposed to the faster way the Hana Kimi manga wrapped up this particular plot point.

Fans of the Hana Kimi manga looking for a live action drama version will likely not be disappointed by To the Beautiful You. I think that if I were watching this drama without the inherent interest of seeing one of my favorite manga adapted, I’d rank it more towards the midrange of the dramas I’ve seen. It is good, but it isn’t an instant classic like You’re Beautiful and I’m not sure if I’m going to feel the need to rewatch it at all. Still, it was interesting to see the adaptation choices as Hana Kimi was translated into a Korean drama, and this series maintained my interest and kept me entertained until the last episode.