MICHELLE: Welcome to the first installment of a new feature called The CMX Project. Back in October, Karen Peck and I talked about the CMX series Canon for that month’s Manga Moveable Feast, and had such fun that we decided to start a recurring feature focusing on some of the other series they released during their all-too-brief time with us. For the most part these will be shoujo works, but not exclusively so.

Hi, Karen! Do you want to introduce our featured title for this month, or shall I? 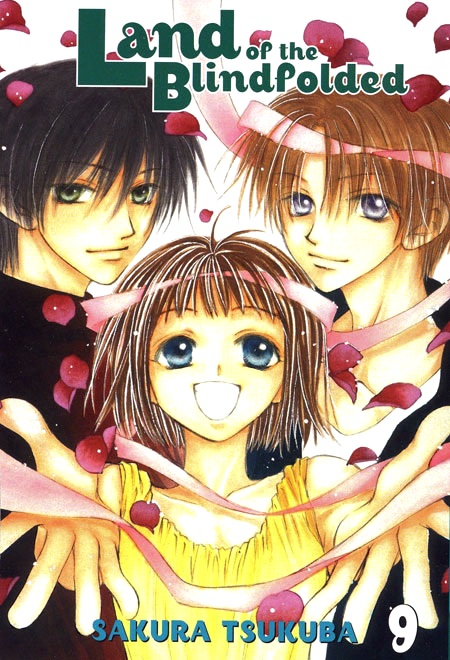 Land of the Blindfolded, or Mekakushi no Kuni, is a nine-volume shoujo manga series by Sakura Tsukuba. It was one of CMX’s debut titles back in 2004, along with some classic titles like Swan and From Eroica with Love. Land of the Blindfolded originally ran in Hakusensha’s LaLa and LaLa DX magazines, and CMX would later go on to pick up another one of her series, Penguin Revolution. Besides these two works, her other series is the Christmas-themed Yoroshiku Master. The rest seems to have been mostly one-shots in different Hakusensha magazines—too bad I missed the two she did in Melody!

Kanade Outsuka sees a world full of people wearing “blindfolds.” But every once in a while, for her, that blindfold “slips” and she gets to see what others can’t—in her case, she can see a person’s future. Having a big heart and a determined spirit (as any good Hakusensha heroine should), Kanade will try to intervene if the future she sees will cause someone harm—even if the person she helps thinks that she’s just being weird. Two boys come into her life—Arou, who can see the past and carries around the heavy burden of his own past—and Namiki, who can also see the future but has a very different attitude about it than Kanade does. A sweet romance develops between Kanade and Arou… and I wouldn’t say “hijiinks ensue;” this title is entirely too gentle for much of that.

Michelle, what were your impressions?

MICHELLE: Initially, I was torn. There were certain elements of the story that I liked—the fact that Kanade and Arou become a couple with minimum fuss, Kanade’s spunky best friend (Eri), the neat side abilities that Arou’s power gives him…—but the first few volumes are very episodic and feature chapters with plots like “a plucky abandoned puppy is rescued from his doom during a rainstorm by an angsty boy affected by the protagonist’s shoujo heroine powers.”

The stories begin to take a more interesting turn in volume five, when Arou first uses his power in a new, freaky way to track Kanade after she’s swept away at the beach. And then shortly thereafter, he’s reunited with a classmate from junior high who wants him to use his powers to benefit society by helping to solve murders. 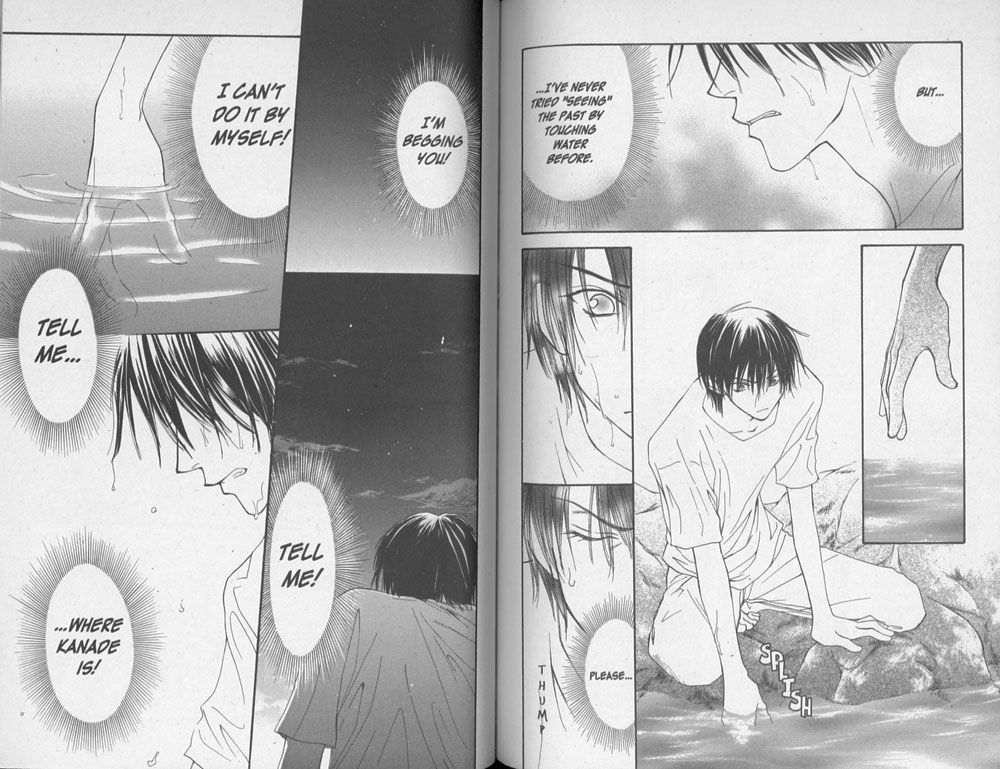 The rest of the volumes are all pretty good, though I’m most fond of volumes six and seven. I note, though, that Kanade really gets the short shrift after a while. She truly is the least interesting character of the bunch, and there is much more time devoted to the traumatic pasts suffered by Arou and Namiki than anything involving Kanade (excepting her decision to come clean to Eri about her ability).

KAREN: It is very episodic, and for me that’s what lead to my assessment of this as being very “gentle”—when stories wrap up each chapter, nothing really seems that dire. Instead, we get a series of ordinary events—the school festival. A clash with student government. The class trip. Hot springs hijinks (okay, so there is a little hijink-ing). The summer festival. And so on.

However, the banality of these events is contrasted with the very unordinary main characters. Here we have a girl who can see the future, but like any other girl her age, she worries about the very ordinary things—will people like the real me? Will I fit in? Can I tell my best friend all of my secrets? It’s this relatability that I think really speaks to the reader. Everyone has insecurities, even these “special” kids. 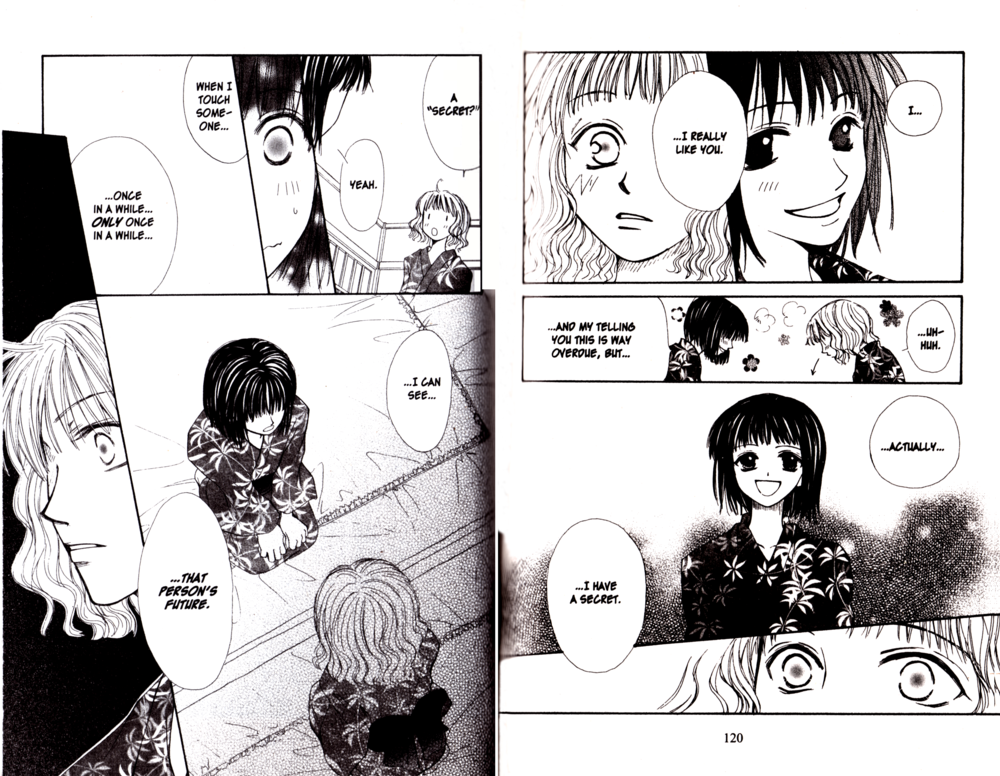 The “plot” really does pick up later on. I was kinda hoping that Arou’s uncle would be more of a revolutionary character—he seems to have some rather dark intentions—but that fizzled out. I’m not sure if that was a red herring or Tsukuba sending off signals that she didn’t mean to.

I do agree with you, Michelle—Kanade seems to downright disappear in some of the stories, and I wish she had more of a presence. I also like that the coupling happens without a lot of drama—and while the back cover tries to play up the triangle, Kanade and Arou only have eyes for each other. Poor Namiki. At least he got a puppy.

MICHELLE: And possibly the world’s most adorable turtle! 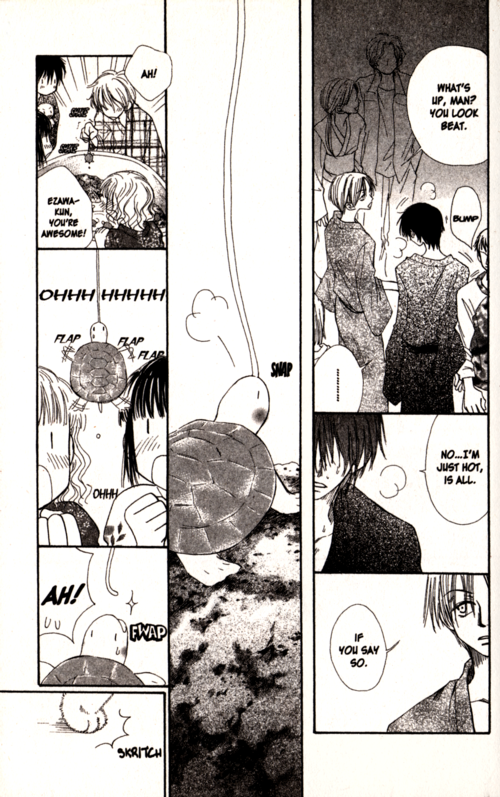 I did find it interesting that although Land of the Blindfolded does include some stock shoujo scenarios—in addition to the ones you named there’s a trip to the amusement park, a trip to the beach, Christmas—they didn’t really annoy me as much as they do in series like, say, Ai Ore! Probably the likeable characters are responsible for that.

And yes, it’s largely the disclosure of the leads’ insecurities that make later volumes more compelling. Learning about Arou’s painful past wherein he was feared and shunned for his abilities makes the present where he is warmly liked and trusted by his classmates that much more significant. Now we can see how much it really means to him. And, too, we learn how scarred Namiki was by his mother’s timidity, and how this contributed to his rather jaded attitude when we first meet him. My absolute favorite scene in the whole series occurs between Namiki and Kanade’s mother, in which she tells him he’s a good boy and he starts to cry. I’m getting a little sniffly just thinking about it, actually. 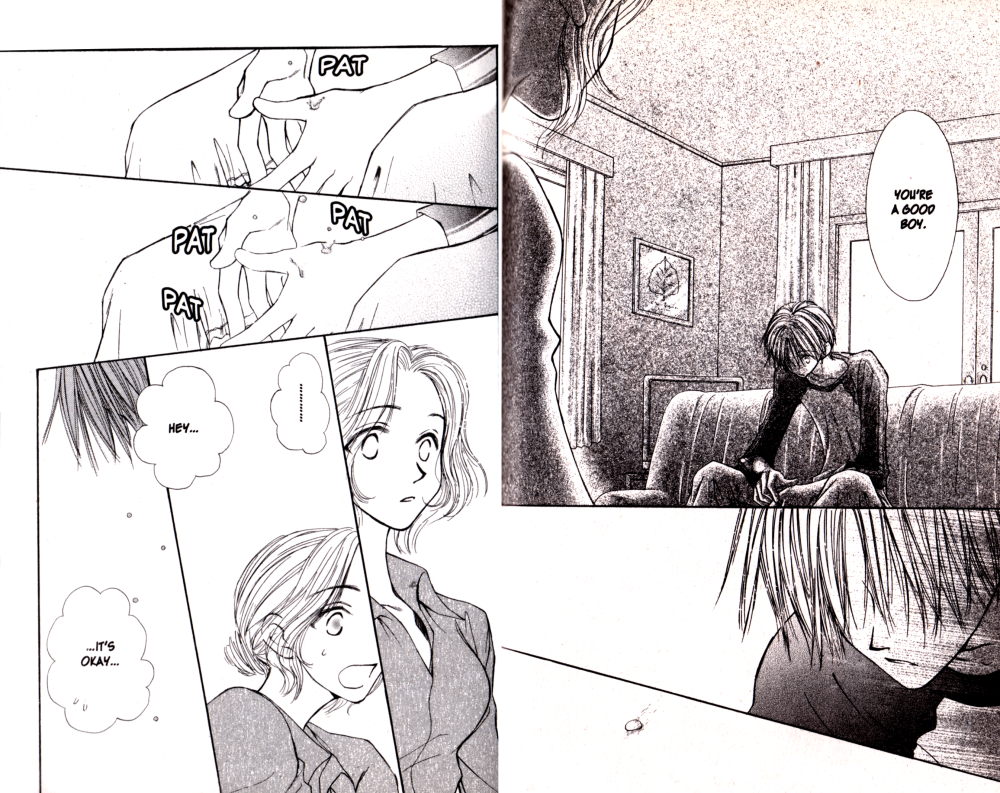 Yeah, the Sou thing did rather fizzle out, but it all played in to the warm and fuzzy “you are not alone” ending, so maybe that was all Tsukuba intended.

KAREN: That turtle was cute. And the pet-sitter bonus chapter was very cute.

I think it’s because Arou and Namiki had those much heavier pasts that Kanade gets lost. Well, she did see a vision of her grandfather’s death, but she’s from such a kind and accepting family that it becomes something to be overcome rather than something creepy that results in her ostracism. I agree with you, Michelle, about how affecting that one scene with Namiki and Kanade’s mother is—it’s really a moment when this story works. It’s a message that would work for any child that was rejected—that you are good. However, if every chapter/story in Land of the Blindfold was this emotionally wrenching, we wouldn’t be able to get through this review!

Of the secondary characters, I also liked Kaicho-san, the student council president. Her attraction to Arou was handled well, and I’m glad that it didn’t devolve into a Marmalade Boy-style Love Dodecahedron. I did like that it was hinting that Kaicho and Namiki might perhaps hook up, but it that was played well, and I think realistically. They would be good together, but for now they still have their hearts somewhere else. By not rushing them together, Tsukuba didn’t compromise their characters and what they had been about. 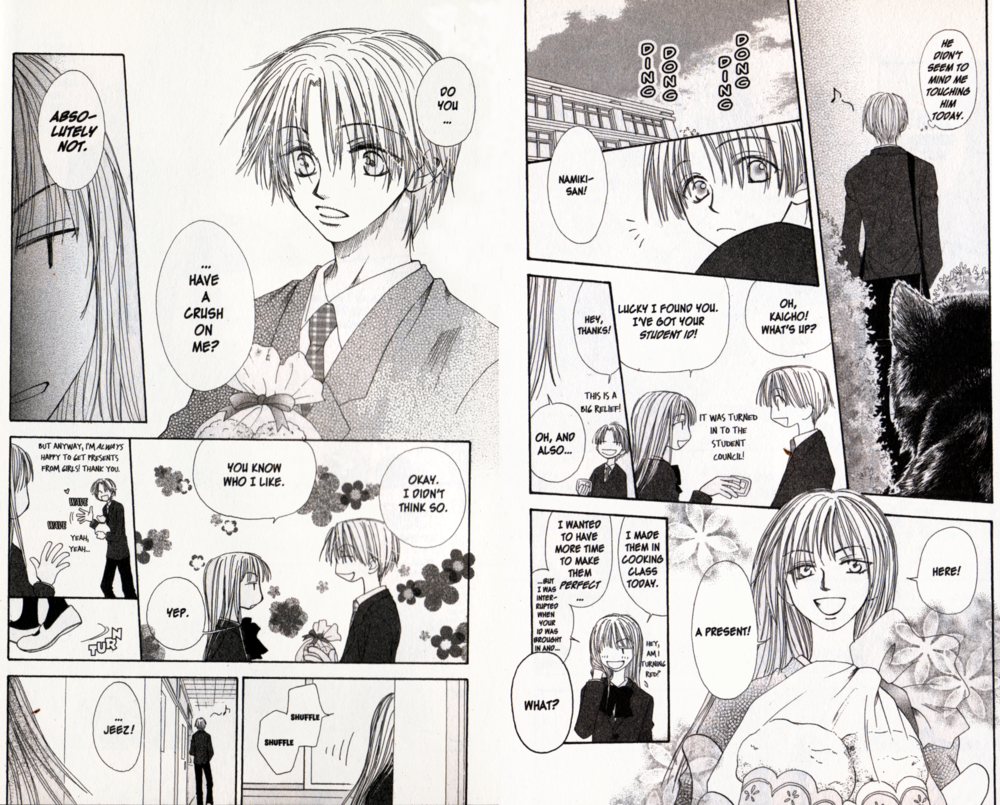 The other beta couple, Eri and Ezawa, were presented as the Doomed Couple, but turned into something else, and so much of it was done in the background, as their story would pop in and out, showing their evolution as a couple.

I did want to say one thing about CMX’s presentation—I remember comments at the time about the tightness of the bindings, and wow, the first three volumes were very hard to read. I’m glad that they worked that out for later volumes so I didn’t have to worry about ruining the book when I opened it. The art… works, if that’s a way of putting it. Sakura Tsukuba isn’t one of the great shoujo artists, but her work is expressive and the humorous moments were very cute.

MICHELLE: I liked Kaicho a lot, too (though we eventually learn her last name, we never learn her first one), and was totally bracing for an eventual pairing off with Namiki. I think she could’ve been the heroine of her own manga series, actually.

We don’t learn too much about the inner workings of Eri and Ezawa’s relationship, but I definitely like that he became more interested in her once she showed she wasn’t going to fawn over him mindlessly like everyone else. She basically learns quickly that attempting to change yourself for someone never works, and then they turn out to be a stable couple from then on. Also, Tsukuba makes a few suggestions that they’re doing more than kissing while still keeping the content within an “E for Everyone” rating.

And yes, those fiendish bindings! I actually have the first five in that style and was desperately sick of them and so relieved when volume six came around. I hadn’t realized it, but I guess I hadn’t read any of the really early CMX volumes before this, so I didn’t know how terrible they were.

I don’t seem to have too much to say about Tsukuba’s art, actually. There were a few sequences that I quite liked, but that was more about what was happening in the scene than her skills. She does mention repeatedly how much she loves drawing animals, and adorable critters did seem to be her strong suit. 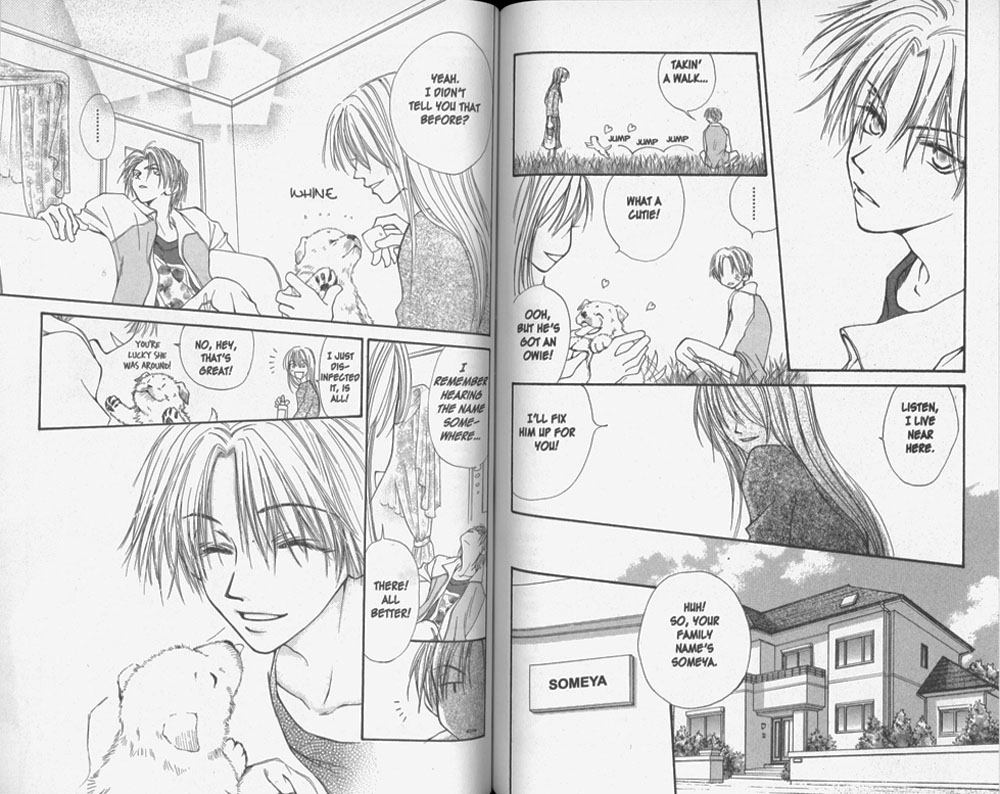 KAREN: I caught that too with Eri and Ezawa. And how it totally flew over Kanade’s head.

Like most CMX series, Land of the Blindfolded is long out-of-print but easily and inexpensively obtainable on the secondary market. The infamous tight bindings vary—Michelle’s go up to volume five, mine only up to three, but they’re still readable. It’s a good title for the younger YA reader, because there’s nothing objectionable and it is such a sweet story—no questionable misogyny, for example. This is the sort of title that CMX did so well—and something that’s very much missed in the current market. (I’m sure there’s many YA librarians who agree!) Thankfully, though, they did manage to get so many titles out during their time—I’m looking forward to the next title we’re going to cover!

MICHELLE: Which is… drumroll please… Cipher, by Minako Narita! I’ve been meaning to read this for ages, so I’m really excited about next month’s column.

Thanks for joining us this month, and we hope you’ll be back next time!