Right near the beginning of the film, our protagonist is sitting inside Taipei Train Station, with a train ticket in her hand. Then it begins to snow.

I think that says more about what kind of movie this is than any blurb I can think up.

Xiaomei is not as happy living in the city with her parents as she was when she lived with her grandfather in the countryside. She becomes friends with her new classmate, Xiaojie, who is often bullied by the other students.

There is a piece missing in her “Starry Starry Night” jigsaw puzzle, and she can’t find it or replace it.

Eventually, shortly after her grandfather’s death, Xiaomei’s parents announce that they are going to divorce. Afterwards, Xiaomei runs away with Xiaojie to go to the house where she lived with her (now dead) grandfather. But they get lost…

This film is based on the picture book by the very successful Taiwanese illustrator/writer Jimmy Liao, which in turn was named after a certain Vincent Van Gogh painting. It was a Chinese-Taiwanese co-production (China supplied the money, Taiwan supplied the creativity), and the first public screening was at the Busan International Film Festival.

First of all, when I saw the first scene, which was filmed in Taipei Train Station, I thought “that is exactly how it looked when I was living in Taipei.” I remember when the scaffolding in the background was first put up. However, it’s been over a year since Taipei train station looked like that (the scaffolding was for the renovation), so I checked. Lo and behold, that scene was shot in March 2011, when I was still living quite close to the train station. Back then, I spent quite a bit of time wandering around Taipei station, pondering whatever was on my mind (for example, I remember one evening when I was walking around Taipei train station and couldn’t stop thinking about Basara). The fact that this is exactly how Taipei Train Station looked when I lived around there (minus the snow, of course) makes this specific scene very nostalgic to me. When I get around to discussing Mars (I can hardly believe that I haven’t dedicated a post to Mars yet) I will say more about the neighborhood.

And then there are the scenes in the Alishan mountains.

This is nothing compared to the famous cypress or bamboo forests in the Alishan region.

The Alishan mountains have an important place in Taiwan’s cultural heritage. First of all, Taiwan’s most famous kind of tea, Alishan mountain tea, is grown there. A popular Taiwanese drink/desert, aiyu, originated in the Alishan mountains, and the best aiyu I’ve ever consumed was in Ruifeng, one of Alishan’s villages. Alishan is one of the most popular places to view Yushan, Taiwan’s highest – and most culturally revered – mountain. And then, there is the famous Alishan Forest Railway, which an important cultural symbol, as well as notorious for its many mishaps. Currently, only a few sections of the railway are in operation (the tracks have a tendency to collapse during earthquakes and typhoons). The silver lining is that, because the trains aren’t running, it is safe to walk on the tracks, which is sometimes the best way to get around the transportation-hostile Alishan range (roads are often washed-out, buses get cancelled, etc). In fact, during the film, Xiaomei and Xiaojie do walk on some train tracks.

There are tons of tea fields in the Alishan region.

Currently, the grandfather’s house is in the historic town of Fenqihu. The movie was not filmed there, but the county requested they move the film set to a place where tourists could visit it. At the time I visited it, I had not seen the movie, but I could see the loving and meticulous care put into all of the little details of the house.

What Does France Have To Do With It?

Xiaomei’s mother is into all things French. She wears French clothes, drinks French wine, decorates her home with French artwork, often talks in France, and after the divorce, she moves to France.

A scene in France.

Until a few decades ago, most prominent visual artists in Taiwan received their training abroad, usually in Japan, China, or … France. When I visit art galleries focusing on Taiwanese artists from before 1980, I can often tell whether the artist trained in Japan, China, or France. Since the institutions to support native talent in the fine arts in Taiwan are relatively young, patrons of the arts who are not so interested in contemporary work often devote most of their attention to foreign art.

What I find interesting is that, in Xiaomei’s imagination, Alishan/Taiwan and France/Europe are not separate worlds. They are part of the same world – her world. Nothing illustrates this more clearly than the scene where an Alishan alpine train rolls through Van Gogh’s “Starry Starry Night.”

Climate-wise, Alishan and France are also not so different. Though Taiwan is a tropical island, the Alishan region is at such as a high elevation that it’s climate is temperate, as you can tell in the movie. When I show some of the photos I’ve taken in Taiwan’s mountainous interior to both Taiwanese and European people, they often comment ‘that looks like Europe’.

The Alishan region also has a significant number of European Catholic missionaries – as reflected in the movie by the abandoned church.

The abandoned church, next to a section of the Alishan railway. There are reasons why most of the Alishan train line is not operating right now, and reasons why, back when it was operating, it was unreliable and had a number of accidents which killed a bunch of passengers.

However, sometimes it’s a little more subtle – light the shadow of Xiaomei’s half-naked body in an abandoned church (I’m surprised that I’m calling the silhouette of an adolescent girl changing her clothes inside a church “subtle”).

However, the climax of the movie is Xiaomei’s nightmare.

In her nightmare, her friend Xiaojie, and then her parents, are a jigsaw puzzle – and the pieces are falling apart.

However, what makes a deeper impression on me than the magical realism is the human side of the story. 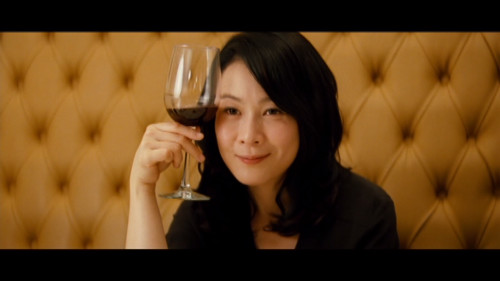 One of the most memorable scenes is when Xiaomei is dining with her mother in a very posh establishment. Xiaomei asks her mother if she’s happy, and her mother says that she is very happy. It’s obvious to the audience, however, that she is not at all happy. To get away from the topic of her (un)happiness, her mother spontaneously pulls her daughter out of her seat for a dance. For a moment, mother and daughter are cheerfully dancing together and then … the cheerfulness recedes.

It’s little touches like this throughout the film which makes the characters feel lively and real.

I don’t get this movie.

Though I appreciated many of the individual elements in this movie, for some reason, the trees would not come together in my mind to form a forest.

It’s not that the plot is hard to follow. The plot is quite easy to follow. It’s the significance of what happens which baffles me.

Maybe if I were to see the movie again next year, I would totally get it, and wonder why it wasn’t obvious to me before. Or maybe I still wouldn’t get it.

In spite of all this, the movie is still recommended. Even though I had trouble figuring out the sum of the parts, nearly all of the parts are very charming.

Next Time: Shadow of Visions (manhua)

As long as there isn’t a typhoon, or a big earthquake, or roads closed by landslides, or huge rocks falling for no obvious reason, Taiwan’s mountains are an excellent place to get away from the heat of the Taiwanese summer. Sara K. plans to go into the mountains next week, partially for that very reason. Alas, there are plenty of things which can foil her plans. Fortunately, she is less susceptible to altitude sickness than many people, which makes things a little easier.