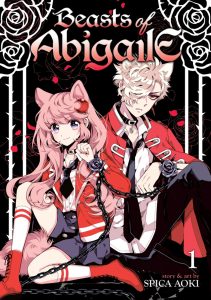 After having been bullied in school back home in Japan, Tsukishiro Nina comes to live with her uncle in the tiny principality of Ruberia, famous for its roses. Outwardly, it’s an affluent place, but Nina soon learns—after being bitten by a luga and taking on some of their characteristics—that wolf-like people known as luga serve as slave labor for the humans in Ruberia, and that young luga are all rounded up and sent to an island prison/school called Abigaile, where they learn how to serve humans. Nina is sent there after her transformation and must try to blend in, because if the other luga find out she’s human, they’ll turn on her.

I wasn’t sure I would like this at first because Nina’s character blurb contains the phrase “sometimes lets her emotions drive her to dangerous behavior,” which is definitely not my favorite personality type. And, it’s true, she does require a bit of rescuing due to her impulsive actions, usually by handsome luga named Gilles (who’s on the student council and seemingly devoted to its mysterious president) and Dario (the effeminate alpha who dreams of becoming a fashion designer). However, I like that, because she comes from a place where teenagers are able to pursue their aspirations, she becomes determined that the luga should have the same right, and thus wants to unite them and get them out of there. 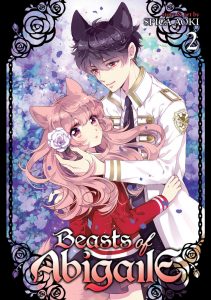 That said, Nina is actually the least interesting character to me. I probably shouldn’t like Roy, the luga who bit her and who is the alpha of the most dangerous “home” (basically a pack) in Abigaile. He enjoys tormenting Nina but he’s definitely the most fascinating character so far, especially when we learn at the end of volume two that he himself had hoped to unite the luga but couldn’t. Nina and Roy actually remind me of Clarke and Bellamy in The 100—two teens who emerged as leaders from among a disenfranchised group of youth who disagree with each other’s methods, but if they could trust each other and become a team, then they might really have a chance. (Granted, I haven’t seen more than a handful of episodes at this point.) I like that dynamic between them and look forward to Roy eventually coming to trust Nina.

Meanwhile, Roy’s “beta,” Eva, is possessive of him in the extreme and jealous of Nina, so contrives to attack and/or expose her at every turn. She’s a great antagonist because her motives are so strong, and by the end of volume two she’s convinced Poe, a lowly “omega” whom Nina has been trying hard to protect, to turn on Nina and deliver unto her the rose perfume that disguises Nina’s human scent. Dun dun dun!

In addition to hoping Roy and Nina team up and successfully escape Abigaile, there are some other plot points I hope get fleshed out. What’s the deal with the student council president? Why is the chief instructor such a bishounen? Surely the mangaka wouldn’t waste such a character design on someone who wasn’t going to be significant down the road. And, perhaps most importantly, why did being bit by Roy cause Nina to take on luga characteristics, when that never happened to any of the other humans he’s bitten?

I’m glad I took a chance on this one.

Beasts of Abigaile is ongoing in Japan, where three volumes have been released so far. The third comes out in English on Tuesday.

Review copy for volume one provided by the publisher.