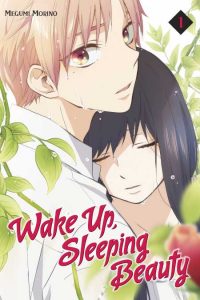 Tetsu Misato makes up for what he lacks in height with his energy and determination. Due to a mysterious promise he made to his hospitalized mother, Tetsu is driven to earn money. So much so that he plains to join the work force after graduation and already is working several part-time jobs while in high school, abandoning the soccer team as a result. To prove to his father that he is ready to hold down a job, he begins working through his father’s housekeeping agency at the Karasawa mansion. There have long been rumors that the place is haunted, but Tetsu soon learns that the “frail, sickly daughter” who allegedly lives in a separate building is a real and friendly girl, no apparition at all.

In fact, Shizu doesn’t seem ill at all, but some of the things she says are strange, like “I’d like you to come see me… to see Shizu Karasawa again.” And when Tetsu confesses his love (thankfully without prolonged angst) Shizu is troubled and invites him to visit again on his next work day before she gives him a straight answer. When he complies, he finds a completely different Shizu, who refers to the personality Tetsu interacted with as “Haru” and only vaguely remembers Tetsu. She doesn’t seem to know who she herself really is.

Most of this first volume is Tetsu figuring out the mystery of what exactly Shizu’s deal is, which I don’t want to spoil, but I will say I definitely enjoyed the read. Early on, there are some gag reaction panels that aren’t particularly amusing, but which make the darker, creepier moments later on land with more impact. Tetsu is quite the scaredy cat, and while he initially visits Shizu because he cares about her (well, the Haru version, at least) and doesn’t want her to be lonely, by the end of the volume, Shizu’s mother has made him an offer he can’t refuse, and though he’s now scared of Shizu because of what he’s learned, he’s compelled to stay near her to protect someone he cares about—and this time, I think that’s referring to his mother or his family and ties in to the unknown reason that he needs to earn all that money. It’s a nice shift in his motivations, especially as it occurs after the real Shizu has shown that she cares about Tetsu, a first for her.

The tables have turned in their relationship, and I very much look forward to see how the story progresses from here.

Wake Up, Sleeping Beauty is complete in six volumes. Volume two will be out in English next week.