A new installment of The Queen’s Thief is here! That proved an excellent incentive to reread the first three books (which I deeply love) and finally tackle the fourth book as well as the handful of short stories that’ve appeared as paperback extras. 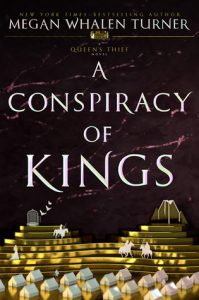 A Conspiracy of Kings
A Conspiracy of Kings is a coming-of-age story for Sophos, the sweet, scholarly boy we met in The Thief who also happens to be the heir to Sounis. Some of the barons are in revolt, and when the villa in which he’s staying is attacked, Sophos tries to save his mother and sisters but ends up captured himself. Although he’s resourceful enough to escape and hide out amongst enslaved field hands, he nonetheless is bitterly self-critical and sure his father is disappointed in him (as usual). And yet, throughout the course of the novel, he exhibits a great deal of courage, makes some hard choices, and—though still the sweet, scholarly boy underneath—ultimately becomes a worthy king.

A Conspiracy of Kings strikes me as a simpler book than The King of Attolia, probably because Sophos is earnest and idealistic rather than guarded and secretive, though that’s not to say that he’s incapable of carrying out a secret plan or clever strategy. The book does have an unusual narrative style, beginning in the third person with Sophos already in Attolia, switching to first person as he tells Eddis his story up to that point, going back into third while everyone’s together in Attolia, going back into first when he returns after claiming the throne and fills Eddis in again, and then back into third for the ending.

It occurs to me that as The Queen’s Thief series continues, the further we’re getting away from Eugenides. The Thief was first-person from his point of view, The Queen of Attolia was third-person, The King of Attolia viewed Gen and his relationship with the queen through the eyes of a palace guard, and now we have a story about Sophos in which Gen appears occasionally and spends some of that time behaving with icy formality. I appreciate the expanding world the characters inhabit and genuinely enjoy spending time with everyone, but I do love Gen best and hope the focus returns to him someday. 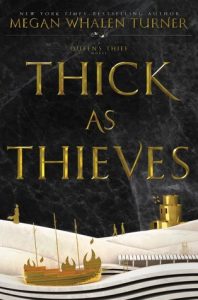 Thick as Thieves
After waiting so long for a new book in the series, learning that it would be about Kamet, the slave of the Mede ambassador Nahuseresh, was somewhat of a disappointment. Now, I feel compelled to apologize to the author because I really should’ve had more faith in her. Kamet is a smart, distrustful protagonist with somewhat of a superiority complex and his evolution throughout the novel is fascinating.

Thick as Thieves is most similar to the first book in the series, since it involves a road trip peppered with storytelling. An Attolian soldier has been dispatched by Eugenides to steal Kamet out of spite, and after initially planning to decline the offer of freedom (thinking of all the power he will one day wield after he is gifted to the next emperor), Kamet is forced to accept after learning that his master has been poisoned and that he must escape quickly or face torture and execution. A Goodreads reviewer describes what follows as “bloodshed, betrayal, and bromance,” and I really cannot improve on that description. Although he initially thinks the Attolian is an idiot and plans on ditching him at the earliest opportunity (rather than return to uncivilized Attolia) he comes to like and respect him very much. I also love how one little piece of information lets readers know exactly who this soldier is, although Kamet does not use his name until near the end.

I don’t want to spoil the ending, but that’s the part of the book that really shines. (Alas, the road trip does drag a little in parts.) There are quite a few surprises—including one satisfying “I knew it!” moment—and the conclusion is both sniff-inducing and exciting, as conflict is still brewing between the Empire and the small countries on the peninsula, though the latter (thanks to Eugenides) appear to have acquired some powerful allies. This is such a great series and I hope we’ll see Kamet again in what follows.

The short stories:
“Thief!”, originally printed in Disney Adventures Magazine in 2000, is a prequel short story about Eugenides as a kid. There’s not much to it, but I liked seeing Gen interact with his older brother and favorite sibling, Stenides.

“Eddis” was included in the 2007 paperback edition of The King of Attolia. In it, nine-year-old Helen—wonderfully described as round, solid, sturdy, and not too bothered by the fact that she isn’t pretty—slips away from the palace to go exploring. Her destination is a desolate temple where she is visited in the night by a trio of gods, who refer to her as “the last Eddis.” It’s a neat story that not only fleshes out Helen’s background a little bit and explains why she uses the masculine “Eddis” rather than “Eddia,” but ties in nicely with her motivations in A Conspiracy of Kings.

“Destruction” was included in the 2011 paperback edition of A Conspiracy of Kings. In this brief story, we witness the ceremony to dispose of Hamiathes’s Gift in the fires of the Sacred Mountain in Eddis. Frustrated Sounis is in attendance as is Attolia, who never takes her eyes from Eugenides. Scant though it is, I find I appreciate having a mental image for this occasion, as well as the moment in which Eugenides achieves certainty that the stone is really gone.

“Knife Dance” is included in the new paperback edition of The Queen of Attolia. In it, a juggler named Druic is coerced by his jerk of a brother to perform a certain Eddisian knife dance—”one of the Mysteries of the Thieves”—for the court of Attolia. Both the king and his god have something to say about it. I liked this one, and the ending was very satisfying.

“Wineshop” is included in the new paperback edition of The King of Attolia. It’s extremely short and depicts Eugenides enjoying his final moment of anonymity before coins bearing his likeness enter circulation and how Teleus spoils it all. There’s one part of it that makes me wonder if Eugenides knew that was going to happen. It would not surprise me.