Rising of the Shield Hero Volume 1 by Aneko Yusagi

It has been some time since I’ve read a light novel, and so when One Peace sent me Rising of the Shield Hero, I decided to give it a try. The plot centers around Naofumi Iwatani, a disaffected otaku who abruptly finds himself transported into an alternate universe where he suddenly has to take on the role of the Shield Hero, on a quest that closely resembles a Japanese RPG.

I found the first couple chapters of the book a bit difficult to get into, partially because Naofumi is such an unsympathetic character who narrates his daily existence with flat declarative sentences. He soon finds himself in possession of an odd book which promptly transports him to another world, along with 3 other young men. They are the heroes of the sword, spear, bow, and shield respectively. Naofumi gets the shield, and finds himself scorned and mistreated partially due to his attitude and partially due to his only having a defensive weapon. The heroes all are assigned companions, and have to go out and get more experience to improve their abilities, just like one would have to grind in a typical game. Naofumi gets a female sidekick named Myne, but she promptly betrays him and leaves him penniless and alone.

The events centering around Myne’s betrayal of Naofumi were my least favorite part of the book, because she claims that he attempted to rape her. A woman making a false rape claim is not a plot point I enjoy reading, and shortly after his betrayal, Naofumi gets yet another female sidekick in the form of a slave tanuki girl named Raphtalia. He decides that he might enjoy owning a female slave because he now hates all women. Naofumi and Raphtalia embark on leveling up in their world by killing a number of low level demons that resemble orange balloons. Each time Naofumi defeats a different monster, his shield gains additional abilities. This was the part of the book I enjoyed the most, because Naofumi can’t use weapons due to his status as a shield hero. So he has to have a companion around to actually stab at things in order to get points and loot, and he manages to be fairly clever about coming up with ways to make money to get better equipment. Since he’s the shield hero, Naofumi has a great deal of personal defense. He decides to carry around orange balloon monsters underneath his cloak, and if people give him a hard time, he sets them loose. Naofumi’s bartering and blackmailing of the townspeople in order to get better equipment were one of the more amusing aspects of the book

Naofumi has an incredibly selfish way of thinking about things, but his actions often turn out to be less self-serving than I was expecting. Despite his dark thoughts, he actually treats Raphtalia more like a younger sister or companion. However, as she levels up, she grows up, so there is undoubtedly a romance ahead between the two main characters, which seems skeevy to me, since Naofumi met her when she was 10 years old.

The book needed a good solid pass from a copy editor, there were quite a few punctuation and spelling errors. The illustration included in the book were quite nice. Overall, this was a mixed read for me. I enjoyed aspects of the world building and Naofumi’s ingenuity. His general crankiness is also a nice contrast from the type of character that gets caught up in an adventure in another world. The flat, non-descriptive writing style made The Rising of the Shield Hero a bit of a slog in the earlier chapters, and I find myself creeped out by the prospect of romance developing in the later volumes. 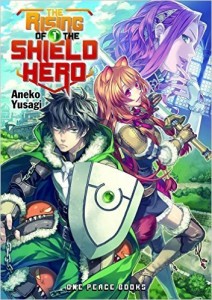