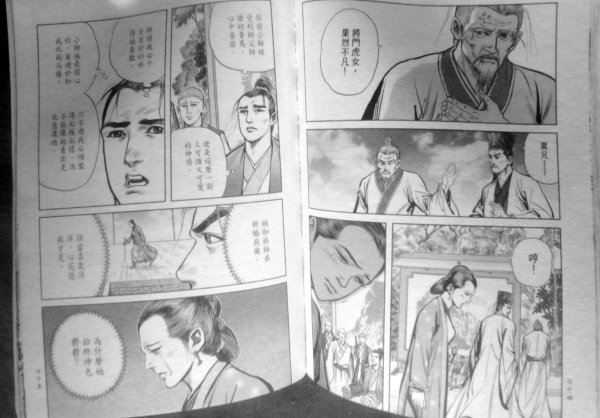 Linghu Chong notices that the young woman whom he is still very sweet on, Yue Lingshan, is unhappy. 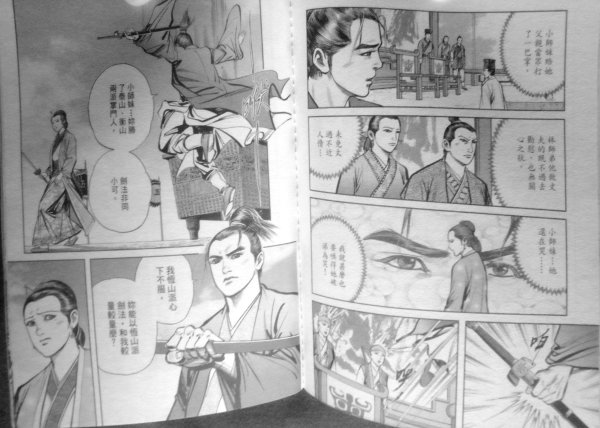 Furthermore, he notices that her father and husband don’t care that she’s unhappy. He tries to think of a socially appropriate way to cheer her up. 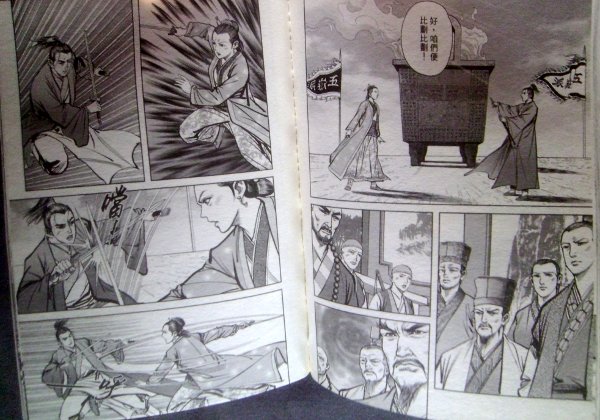 Linghu Chong remembers that, when he was a part of Yue Lingshan’s family, he could always cheer her up by losing to her in a sword fight (without letting her know that he lost on purpose). Therefore, he figures the best way to cheer her up is to challenge her to duel. 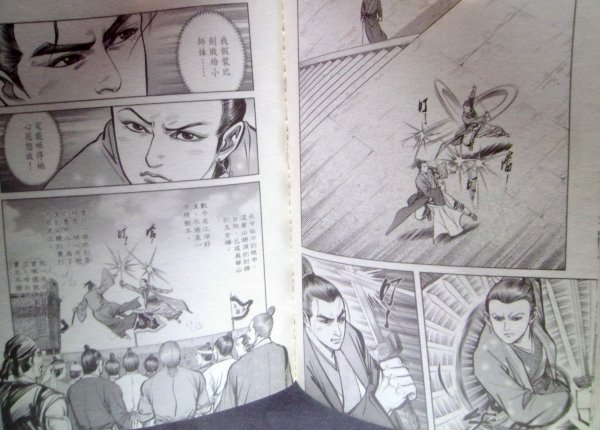 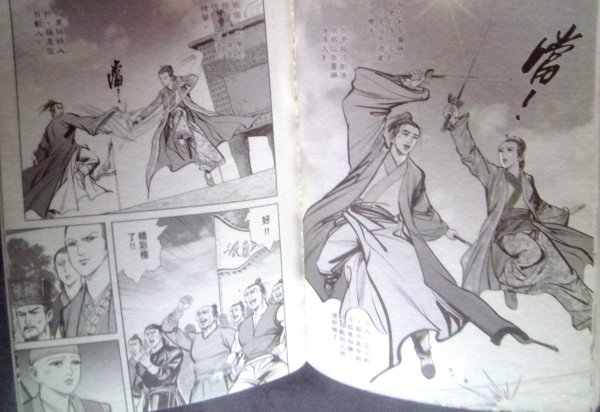 The crowd notices that, while the fight is intense, the feeling is not of intense enmity, but a feeling of intense love. Somebody even remarks that it seems like they are dancing rather than fighting (ha, I am *not* the only person to consider the fights in Chinese martial arts fiction to be a kind of dancing). 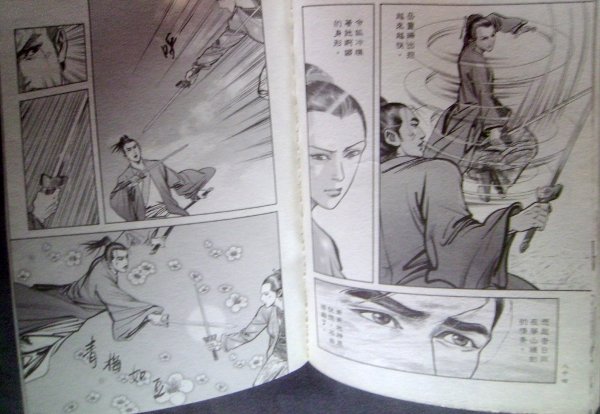 I love those flowers. Methinks the artist has been exposed to shoujo manga. 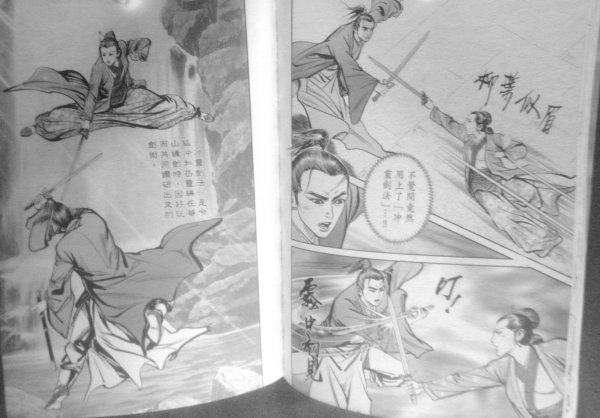 This fight is bringing back Linghu Chong and Yue Lingshan’s memories of practising swordplay at Mount Hua, which was the happiest period in both of their lives. In fact, they are using the sword technique that they themselves made up together.

And this is why Jin Yong writes the best fights. Anyone who invests the time it takes to be a good martial artist has pretty strong feelings about it, and in Jin Yong stories, the fights are a key means by which characters express their feelings, grow, and mature. I have yet to encounter another storyteller who so thoroughly integrates combat and the characters’ emotional journeys. 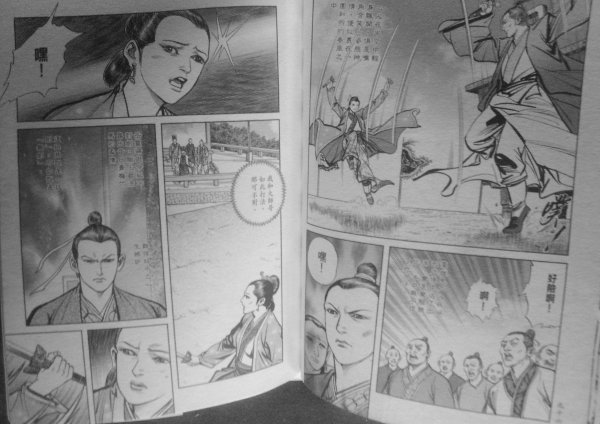 Yue Lingshan’s husband is jealous. Personally, since he doesn’t care about his wife’s happiness (or lack thereof), I think he has forfeited his prerogative to feel jealous. 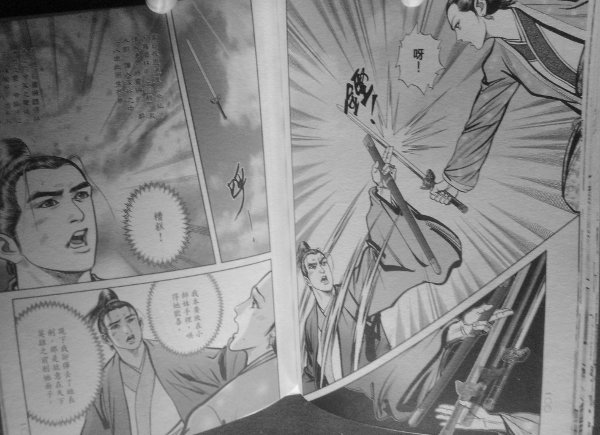 A sword has been launched into the air! 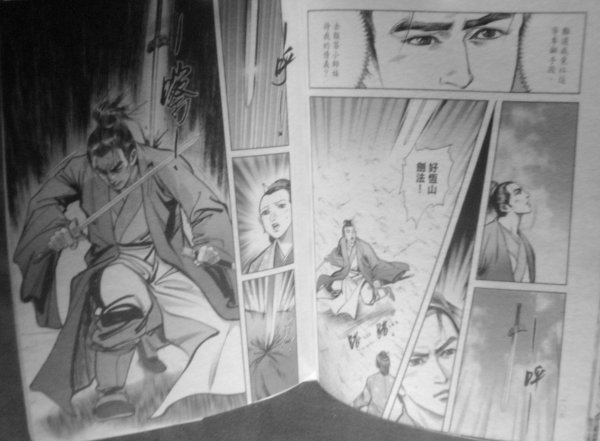 And it lands on Linghu Chong’s back (Linghu Chong let this happen so that Yue Lingshan would win). 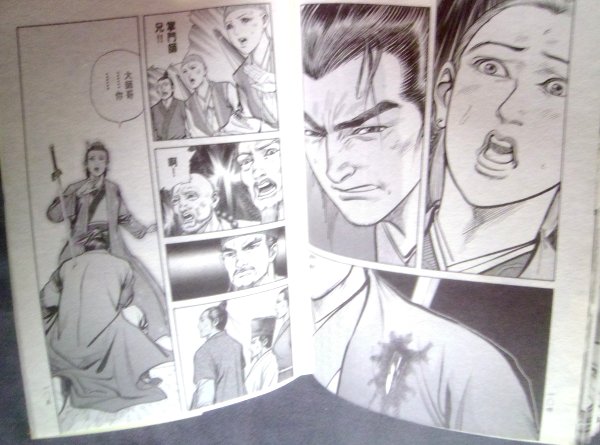 Everyone, especially Yue Lingshan herself, is shocked that she injured Linghu Chong, except Linghu Chong, who is busy enduring the pain of having a sword in his back.

The reader knows that purposefully losing this duel is a potential disaster for Linghu Chong and the people he is responsible for, but it would take at least a paragraph to explain the context, so I’ll just say that the reader should feel an impending sense of doom at this point.

The Laughing Proud Wanderer is, of course, one of Jin Yong’s more famous novels. It should not come as a surprise to anyone who read my post about Lee Chi-Ching’s The Eagle-Shooting Heroes that I would eventually review the other manhua adaptation of a Jin Yong novel. This novel is also special to me for a personal reason, but I plan to discuss that in a future post.

The Laughing Proud Wanderer was written during the Cultural Revolution in China, and it’s pretty obvious that Cold War politics strongly influenced the novel. Some people even go so far as to say that it’s a political allegory. I prefer not to interpret it as an allegory, but allegories are fun, so I’m going to describe the story in allegorical terms using the most common interpretation (Five Mountain Sword Sects = Soviet Union, etc.)

Linghu Chong is a disciple of the Hua Mountain Sect, which is part of the Soviet Union. He a bit of a loose cannon. He tries to do the right thing, but this sometimes gets him in trouble. Furthermore, in situations when most Jin Yong heroes would run away, he says, “Bwa ha ha ha ha ha, I am Linghu Chong, I’m NOT SCARED OF YOU! HA HA HA HA HA!” even when he is clearly no match for whatever he’s facing, which leads to him getting bashed up a lot and spending at least half of the story recovering from injuries he could have avoided by running away. It’s a bit astonishing that he manages to survive all this.

Anyway, the Soviet Union is sworn enemies with the Chinese Communist Party, led by Mao Zedong, and has a … tense relationship with Shaolin, Wudang, and Emei, which belong to NATO.

Linghu Chong gets kicked out of the Hua Mountain Sect, which causes him much angst because he has been brainwashed by the Soviet Union, and is in love with his shifu’s daughter, Yue Lingshan. During his wanderings, he encounters another young woman, Ren Yingying, and slowly develops a relationship with her, but then it’s revealed that she is part of the Chinese Communist Party. which, according to the Soviet Union, is totally evil.

Of course, the intrigue gets thicker. Joseph Stalin, who already leads the most powerful sect in the Soviet Union, wants to bring the entire Soviet Union under his control, and Mao Zedong has imprisoned Ren Yingying’s father and taken over the Chinese Communist Party. Linghu Chong does not want to deal with this, but he has a clue of what’s at stake and, unfortunately for him, NATO, the Chinese Communist Party, and especially the Soviet Union want to deal with him.

Many of the comments I made about the artwork in Lee Chi Ching’s The Eagle-Shooting Heroes also apply to this manhua, though there aren’t nearly as many tears in this one. Linghu Chong is the *laughing/smiling* proud wanderer, not the weepy proud wanderer.

Lee Chi-Ching is still a master of depicting movements of the human body. 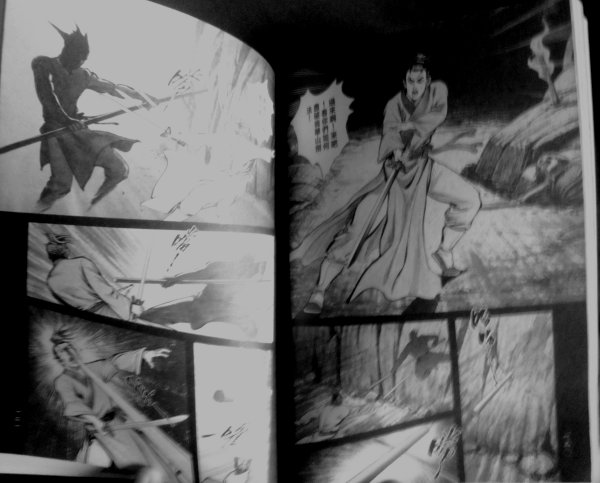 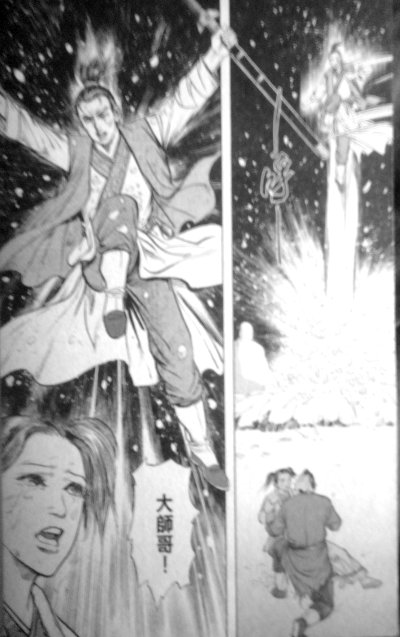 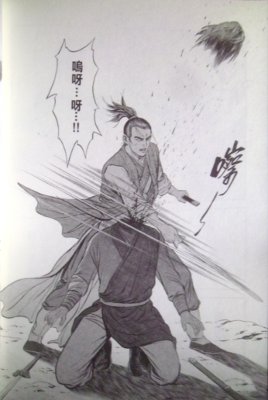 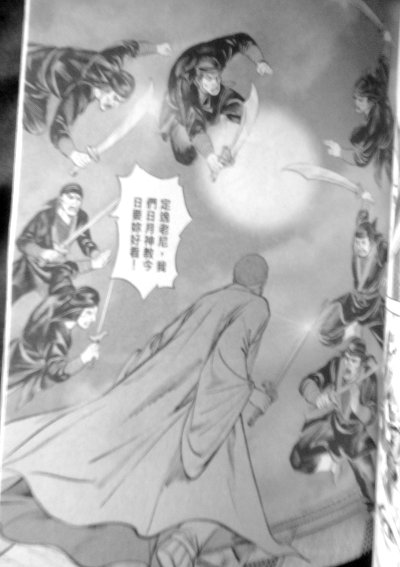 Lee Chi-Ching’s style, of course, is heavily influenced by Japanese manga, but he also draws upon the long history of Chinese brush-ink paintings, which makes the manhua feel more distinctively Chinese (this was, if I remember correctly, one of the reasons Jin Yong was interested in having Lee Chi-Ching adapt and illustrate his novels). 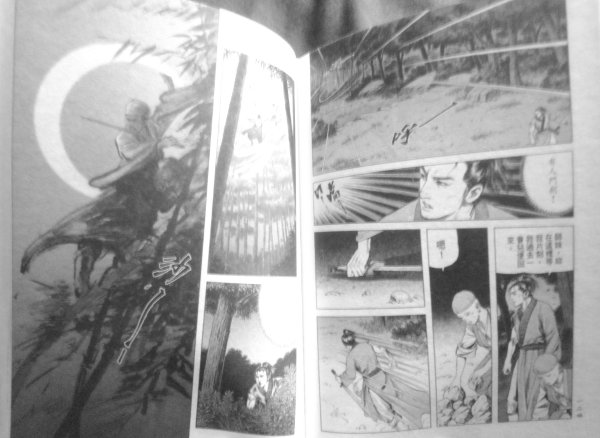 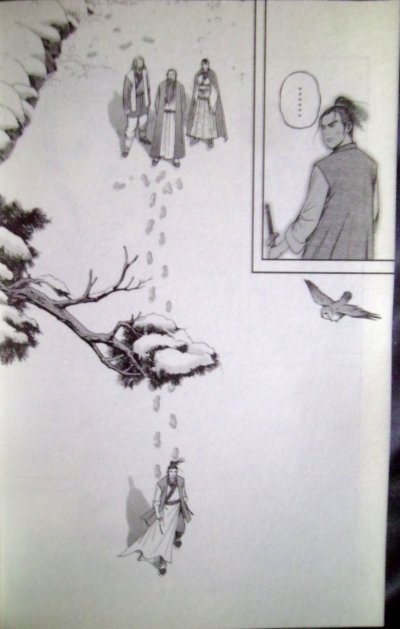 Additionally, this manhua has a few color pages, like the ones below. 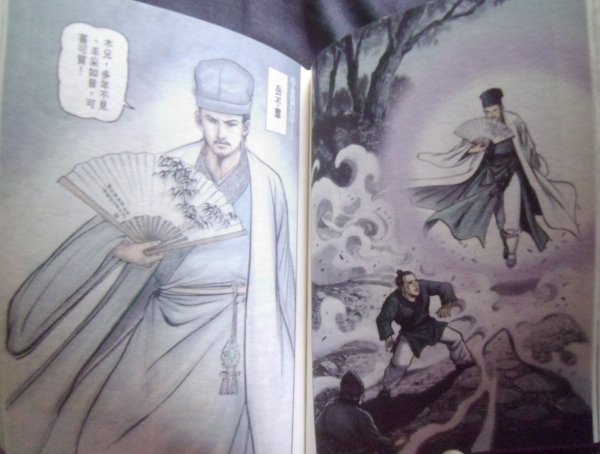 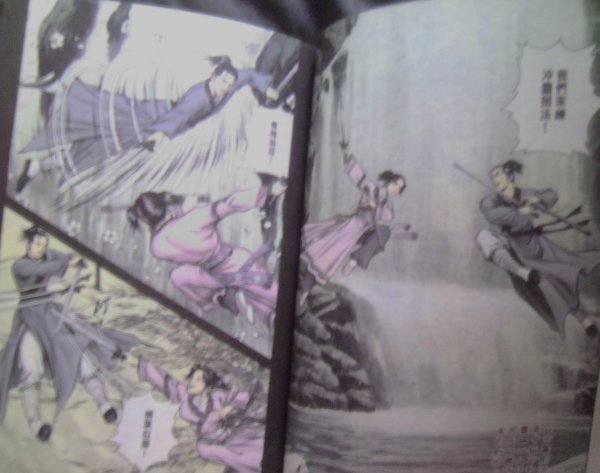 The palette is quite muted, unlike the palettes seen in most Hong Kong manhua, or Japanese manga (or American comics for that matter). It most resembles the color palettes found in traditional Chinese paintings. Since the color is used to highlight particular moments, I wouldn’t want the entire manhua to be in color, but I would have definitely liked more color pages (perhaps having the manhua be 10% in color).

Two characters who I think Lee Chi-ching did a particularly good job of depicting are Yue Lingshan and Yue Buqun. 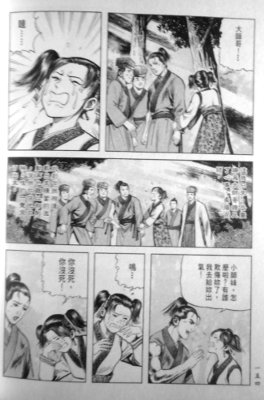 Lee Chi-Ching says Yue Buqun is one of his favorite characters, and I can see that in the artwork (one of the color examples above shows Yue Buqun). I also think he got Yue Lingshan just right. This manhua deepened my appreciation of both of these characters.

This time, I read the novel before reading the manhua.

On the one hand, I’m a bit disappointed that it removed one of my favorite scenes. On the other hand, I recognize that this story is so long that Lee Chi-ching almost had to abridge it, and that the scene is not essential to the main story.

Impressively, Lee Chi-ching did manage to keep most scenes from the novel, but he often slimmed them down—I often notice that specific bits of dialogue I remembered were not present in the manhua. It is a compliment to Jin Yong’s writing skill that I was able to remember so many bits of dialogue more than six months after having read the novel, yet at the same time I think slimming down the dialogue was the right choice; having too many words would have bogged down the manhua’s pacing, and people who really want that should read the bloody novel.

While it’s not identical to the novel, I feel this is faithful to the spirit of the novel, and while it’s always possible to find something to complain about, I still think this is, overall, an excellent adaptation, and I don’t think anybody else would have done it better. 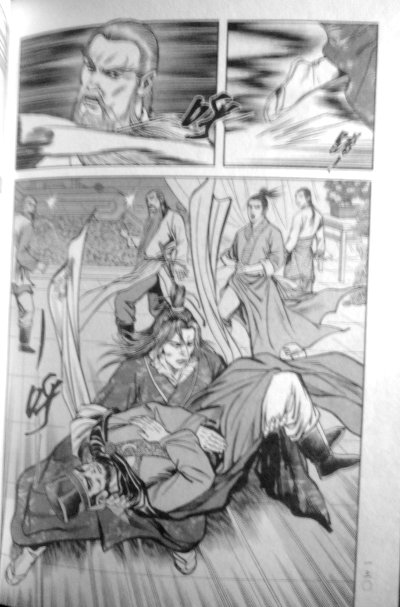 It would take an entire post for me to describe what I think about the depiction of Dongfang Bubai and certain other characters, so let’s just say that I think it’s transphobic, homophobic, and sexist.

Given the source material, I think Lee Chi-ching’s depiction was as inoffensive as it could be while staying faithful to the original … with one exception.

In both the novel and the manhua, Linghu Chong says that it’s laughable that a sect leader would dress as a woman. First of all, there’s Huang Rong in The Eagle Shooting-Heroes who is a sect leader and usually dresses like a woman, but maybe she doesn’t count because she’s cis-female. And for some reason, people don’t think it’s shameful for women to dress as men (which happens quite often in Jin Yong stories).

However, in the novel, Linghu Chong later on ends up dressing like a woman himself, demonstrating that masculine heroes are just as capable of dressing like women as anybody else. This is one of the things which ameliorates the transphobia in the story. Unfortunately, this scene is cut in the manhua. I am almost certain this was in order to make the story move faster, but I still wish it had been kept, if only to counteract the transphobia/sexism.

Each volume of this manhua ends with an afterword from Lee Chi-ching, and these were actually quite interesting. Almost all of them contain a sketch of himself, like this one: 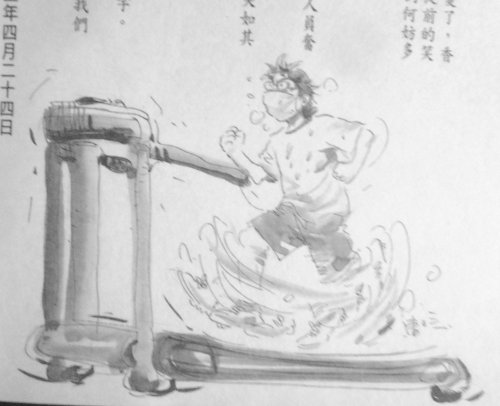 He sometimes talks about Hong Kong current events (such as the transfer to People’s Republic of China rule and the SARS epidemic), he sometimes talks about the personal meaning The Laughing Proud Wanderer has for him (it’s his favorite Jin Yong novel, which is why he was so stoked when Jin Yong asked him to adapt it), and he talks about his artistic ambitions, as well as the other projects he’s working on (such as illustrating all of Jin Yong’s novels for the large-print edition).

Of particular interest to Manga Bookshelf readers are his comments about Korean manhwa. I knew one reason Jin Yong licensed manhua adaptations of his novels was to counter the influence of Japanese manga, but I hadn’t realized that the Hong Kong manga industry also feels invaded by Korean manhwa. Lee Chi-ching tries to see the competition with Korean manhwa as an inspiration to try harder.

Whenever I return to an artist I love, I always wonder if the artist is as great as I recall, or whether a given work will fail to meet my high expectations. Sometimes I am disappointed, but this time I was not. Instead, this manhua reminded me why Lee Chi-ching is one of my favorite comic book artists in any language.

When you like going outside and live in Northern Taiwan, that means the weather has a great deal of control over your schedule. The weather has been unusually good lately (by local standards), so Sara K. barely finished this post on time.