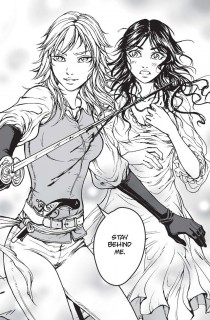 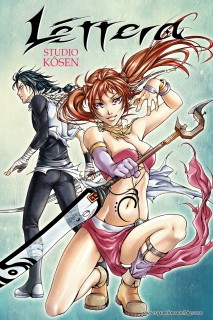 Studio Kôsen, also known simply as Kôsen, is a creative team made up of two Spanish artists: Aurora García Tejado and Diana Fernández Dévora. In Spain, they have been working together creating comics and drawing illustrations since 1998. Beginning in 2004, they started releasing translations of their work in English in the United States, but their comics have been released in other countries as well, including Germany, Poland, Italy, and Argentina.

I was first introduced to Kôsen through their comic Saihôshi: The Guardian, the English-translation of which was initially released by Yaoi Press in 2006. An amusing fantasy with magic and exciting sword fights to go along with its dramatic romance, Saihôshi is representative of what I’ve come to expect from and love most about Kôsen’s work: beautifully drawn, highly entertaining, sexy tales of adventure with a strong sense of humor.

One of Kôsen’s most recent efforts is the ongoing, original English-language comic Windrose, currently being serialized in the online multi-media magazine Sparkler Monthly. It’s a delightful series about a young Spanish lady named Danielle in the 17th century who, when her father goes missing, sets out to find him. In the process she becomes involved with a pair of travelers, Angeline and Leon, who have their own reasons for wanting to help Danielle. 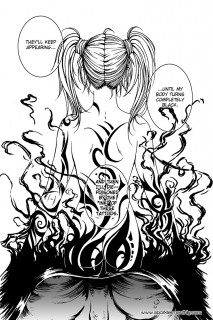 And now there will be even more of Kôsen’s work at Sparkler Monthly! I am pleased to have the privilege to announce that the site will also be hosting Kôsen’s Lêttera, the comic that the duo was working on immediately before Windrose. The three-volume series was released in Spain between 2010 and 2014, but this will be the first time that Lêttera will be made available in its entirety in English.

Garnet Rune is a young, impetuous sorcerer whose tendency to abuse her magic for her own amusement and gain has gotten her into a bit of trouble—she’s been cursed so that every time she casts a spell, a poisoned mark appears on her body, slowly killing her. This forces Garnet to become more mindful of her actions, but it hasn’t really improved her attitude much. Though things don’t always go according to plan, she’s determined to lift the curse by any means necessary.

Lêttera debuts on Sparkler Monthly today with the release of the complete first chapter. The comic will continue to update on Mondays, Wednesdays, and Fridays—six pages a week—until the entire series has been released. Lêttera will be free to read online, but in the near future the ebook edition will be available for purchase. And, if we’re lucky, there may one day be a print edition of Lêttera in English as well.

Personally, I’m very excited to see more of Kôsen’s work translated, and I’m very happy to see Sparkler Monthly involved in making that happen. I was already a huge fan of Sparkler Monthly, but I’m thrilled with the magazine’s recent expansions to include even more comics. With magic, adventure, and a healthy dose of comedy, Lêttera should be a tremendous amount  of fun and a great addition to the Sparkler Monthly lineup.

Last week I posted December’s first in-depth manga review: Breathe Deeply by wife and husband creative team Doton Yamaaki. It’s the second manga to be published by One Peace Books. I quite enjoyed it and look forward to future manga releases by the publisher. I also posted the Give Me Some Gin Tama! Winner. The entry also includes a great list of recommended manga titles to make you laugh. And finally, apologies for the exceptionally brief news section this week! I’m still trying to get back into the groove of things after whatever bizarre illness I had.

The Beautiful Skies of Houou High, Volume 1 by Arata Aki. I’m not as offended by The Beautiful Skies of Houou High as I know some people are, but I can’t say I particularly enjoyed the first volume of the manga, either. Kei Saeba, who literally gets sick in the presence of men, has been enrolled in a prestigious all-boys school by her mother after being dumped by her girlfriend in order to “fix” her daughters preferences. Even worse than that, if anyone discovers that she’s a girl while attending the school, Kei will find herself “disappeared.” I like that Kei likes girls; I like her bifauxnen character design. But that’s most of what I like about the manga. I’m not really enjoying the actual story at this point.

Dragon Girl, Omnibus 1 (equivalent to Volumes 1-3) by Toru Fujieda. Rinna Aizen’s dream is to lead Shoryu Senior High School’s ōendan, or cheering squad (not to be confused with a cheerleading squad). Fortunately for her, the all-boys school has recently gone co-ed. Nothing really stood out for me about Dragon Girl. Rinna and her friends are likeable enough, but the manga uses so many cliches and doesn’t do anything new with them that I actually found it to be rather boring. Long lost childhood love interest? Check. Evil student council? Check. (I could keep going, but I won’t.) However, I would like to thank Fujieda for introducing me to ōendan. That’s some cool stuff right there.

Megatokyo, Volumes 1-3 by Fred Gallagher and Rodney Caston. Megatokyo is a webcomic that began way back in 2000 and is still going. (You can read it here.) Personally, I prefer reading Megatokyo in print. I’ve been following Megatokyo for quite some time, but it’s been a while since I’ve gone back to the beginning. I now realize how many of the Japanese pop culture references went completely over my head the first time I read the comic. I get them now, but even if you don’t, Megatokyo is still great entertainment. Gallagher actually lives in the next town over from me and I’ve even met him on a couple of occasions. I like supporting local creators, which is yet another reason I appreciate Megatokyo.

Saihôshi: The Guardian Omnibus by Kôsen. Saihôshi is probably my favorite publication by Yaoi Press that I’ve read so far. Sure, there is plenty ridiculous about the comic, including odd clothing design choices, gratuitous magic tattoos, and one of the main character’s weapon of choice is basically a giant pair of scissors, but to me that is part of its charm. I’m not sure if it’s intentional or not, though. There are a few brief sex scenes, but Saihôshi‘s focus is on the story. Many of the fantasy elements used are fairly typical, but the plot is actually pretty decent. There was more humor in Saihôshi than I was expecting, too. High art it is not, but I honestly enjoyed Saihôshi. Kôsen is a two-person creative team from Spain made up of Aurora García Tejado and Diana Fernández.