Hooray! I managed to write and post another in-depth review at Experiments in Manga. Even if I’m not writing as much as I once was, it still feels pretty good to get back into the (slow) swing of things. Anyway, last week I took a look at Jen Lee Quick’s dark fantasy Western Gatesmith, Volume 1. The comic is off to an intriguing start though it can also be a little frustrating. The series is currently on break, but I hope that there will be more soon.

As many people are probably aware, the prolific and versatile mangaka Jiro Taniguchi passed away earlier this month. Despite not being particularly well known in English, a fair number of his manga have been released in translation. Kate Dacey of The Manga Critic has a nice guide to Taniguchi’s work for those interested in what is currently available. At The Comics Journal, Taniguchi was the subject of a recent article by Joe McCulloch and an obituary written by Zack Davisson. Other comic sites like The Beat have recently honored Taniguchi as well. I’ve read most but not quite all of Taniguchi’s work in English, my personal favorites being A Distant Neighborhood and his collaboration with Baku Yumemakura The Summit of the Gods. Way back when there was a Manga Moveable Feast devoted to Taniguchi, too. Some of the links are no longer work, but many of the features can still be tracked down.

In happier news, SuBLime announced three new licenses last week: Akane Abe’s Am I In Love or Just Hungry? (digital-only), Scarlet Beriko’s Jackass!, and Tsuta Suzuki’s A Strange and Mystifying Story. (I’m very curious about Jackass! and I’m very happy about A Strange and Mystifying Story which is actually a license rescue. The first three of seven volumes were originally published in English by Digital Manga; I remember quite liking them.) The Toronto Comic Arts Festival has started announcing its featured guests for the year which will include Gengoroh Tagame among other fantastic creators. The OASG talked to Kodansha Comics about the licensing of Chihayafuru. While still probably unlikely, a print edition of the series isn’t completely off the table. As for Kickstarter campaigns for queer comics that have recently caught my attention, Megan Lavey-Heaton has launched a project to print the third volume of Namesake.

Blood Blockade Battlefront, Volumes 1-7 by Yasuhiro Nightow. I wasn’t initially planning on reading Blood Blockade Battlefront–I wasn’t a huge fan Nightow’s Trigun–but I kept hearing great things about the anime adaptation and then I came across a “complete” set of the manga on super sale, so I picked it up. The series is actually ten volumes long; supposedly Dark Horse has plans to release the final three at some point. In general the manga tends to be fairly episodic, so even if the rest of the series isn’t translated at least readers aren’t left with an unresolved story. It wasn’t until partway through the second volume of Blood Blockade Battlefront that the series started to click with me, but once it did I found myself really enjoying the manga. Its mix of goofy everyday life and action-heavy sequences actually reminded me a bit of Cowboy Bebop. The manga is essentially about a semi-secret group of monster hunters working in what used to be New York before it was destroyed by the sudden appearance of an interdimensional portal. The character designs of the main cast are sadly simple and plain compared to the series’ fantastic setting and creatures, but their distinctive personalities mostly make up for that.

The Box Man by Imiri Sakabashira. The North American manga industry is primarily focused on publishing more popular, mainstream works, but occasionally an alternative or independent work is released as well. The Box Man was originally serialized in Ax, an alternative manga magazine in Japan which was the basis for the Ax: Alternative Manga English-language anthology. Examples of Sakabashira’s work can be found in that anthology and in the earlier collection Sake Jock, but The Box Man is his first long-form work to be translated. Granted, there’s very little dialogue that actually needs to be translated–for the most part the manga is an entirely visual experience. Even the story is fairly limited in scope. The narrative follows a kappa-like cat accompanying a man on a scooter who is transporting a box which turns out to contain something rather peculiar. The strangeness of The Box Man doesn’t end there, but the point of the manga seems to be less about telling a story and more about creating a visual spectacle. The artwork incorporates popular culture references (some of which I’m sure I completely missed) and at times can be rather bizarre, violent, or erotically-charged.

Giganto Maxia by Kentaro Miura. Though it certainly has its problems, Miura’s Berserk is one of my favorite series. I have been significantly less enamored with the other manga by Miura that have been released in English–specifically his collaborations with Buronson Japan and King of Wolves–but I was still very curious about Giganto Maxia. Whether it’s intentional or not, the dark fantasy manga shares some similarities with Attack on Titan and Terra Formars and also appears to be heavily influenced by professional wrestling. Miura’s artwork in Giganto Maxia is tremendous but the story, while it isn’t awful, struggles to match the caliber of the illustrations. I almost wonder if Giganto Maxia was originally intended to be longer than a single volume since so much about the manga’s world and characters are left unexplained in the end. Giganto Maxia does more or less tell a complete story, but it feels like a single episode taken from the middle of a larger narrative. At one time a slave forced to battle to the death in a gladiatorial arena, Delos is now fighting against the empire itself. Joining forces with Prome, a powerful spirit who takes the form of a young girl (and who is constantly trying to get him to drink her “nectar” ), Delos can transform into the mythic titan Gohra in order to do battle. 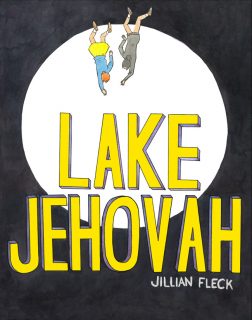 Lake Jehovah by Jillian Fleck. Lake Jehovah, Fleck’s debut graphic novel, first came to my attention due to the fact that Jay, the comic’s protagonist, is genderqueer. While themes of identity, gender, and sexuality are integral to the comic’s story they aren’t the primary focus of Lake Jehovah. Instead, the comic is about the end of the world, both literally and figuratively. Human civilization has already succumbed to multiple apocalypses but Jay unexpectedly becomes the prophet for the next impending disaster while dealing with even more personal and existential crises. Jay struggles with intense depression and anxiety which slowly destroys xis relationship with xis fiance. Eventually she leaves, no longer able to cope with Jay’s instability, and Jay is left recover and come to terms with everything alone. Lake Jehovah actually handles the topic of mental illness better than many other comics I’ve read. It’s an emotionally tumultuous work, tempering despair with humor as the characters search for meaning in their lives even while everything is falling apart around them. Some turn to sex or drugs while others find comfort in poetry or art. Lake Jehovah is a somewhat strange but undeniably compelling comic.