Liang Shanbo is on his merry way to see his sweetheart, with cheerful music playing in the background.

And this all gets interrupted by a parade, with an abrupt switch to solemn, almost mournful music. I can’t say exactly say that it rained on his parade … maybe the parade rained on him?

Liang Shanbo wonders what is going on.

And we have a shot hear of a bird singing in a cage. On the right we see a character which is often used ceremonially to represent auspiciousness, but the way it seems battered up doesn’t look so auspicious!

This brief segment succinctly sums up the film, at least emotionally.

I also suggest watching the 1-minute trailer before continuing reading this post.

About the Shaw Brothers and Huangmei Opera

I had previously discussed one of the Shaw Brothers’ kung-fu classics, The 36th Chamber of Shaolin.

Even though the Shaw Brothers’ Studio is best known outside of Asia for its kung-fu flicks, they also made their share of musicals (which doesn’t surprise me, since I think their kung-fu flicks are a lot like musicals). Some of these films were based on traditional Chinese opera, some of these films had musical numbers which would not have been completely out of place in a 1950s Hollywood film, and then there is Disco Bumpkins.

When common people got access to film and radio, did the Huangmei opera shrivel up as a popular form of entertainment? No! Instead, it joined the party—for about 10 years Huangmei opera films were extremely popular in Taiwna and Hong Kong.

This particular film, The Love Eterne, is the most popular Huangmei opera film ever. It was especially popular in Taiwan. When I say popular, I mean that over 90% of the population of Taipei saw it during it’s first run in theaters, and that there were many reports of fans (mostly female) watching the film over 50 times.

This film is based on a Chinese folktale, “The Butterfly Lovers,” which is sometimes referred to as the Chinese equivalent of “Romeo and Juliet.” It has inspired many works of art. If you don’t know the story, the internet can fill you in (quick version: two young people fall in love with each other, but they can’t marry each other, so they die).

This is such a pretty film. It makes me feel like a little kid, wanting to point out “hey, look at that” throughout.

First of all, the hats and the hairstyles. They make me squee. 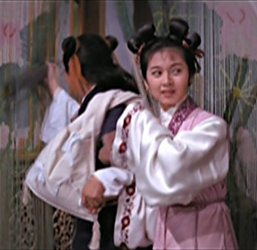 Also, I totally dig the classic Chinese-style furniture and sets throughout the film. Actually, looking at these screenshots, it dawns on me how many of them look like paintings. I guess the director’s training at the Beijing Art Institute shows.

And finally, I adore the use of scenery in this film.

In 1960s Hong Kong, homosexuality was a major taboo, and no mainstream film could delve into it (actually, I think even non-mainstream films wouldn’t have been to go there).

So of course this film is totally het, right? Well … nominally.

First of all, Zhu Yingtai is a “Sweet Polly Oliver,” since she wants to be a scholar but only boys are allowed to get scholarly training. But this is so common in creative works that this by itself not remarkable.

Then, this film is an example of “Sweet on Polly Oliver,” what with Liang Shanbo falling for Zhu Yingtai before he knows her true gender. This can of course be interpreted as boys’ love in a way. But even this is not particularly special.

However, the film takes this gender business to another level by casting an actress, Ivy Ling Po, to play Liang Shanbo, the charming male lead.

Though I don’t think it was intentional, there is definitely a case to be made for lesbian subtext when you have two characters performed by women professing their romantic love for each other.

While I think looking at this as boys’ love or as containing lesbian subtext are both valid interpretations, I prefer to see this film as depicting gender as irrelevant. These two characters are so in love with each other that their gender does not actually matter. Likewise, it isn’t a problem that Ivy Ling Po doesn’t have the same gender as her character since she does such a splendid job.

I think this is part of the reason why this film (and similar things, such as the Takarazuka review) have so many devoted fans—this invites people to shed the tyranny of gender roles and express themselves freely.

Speaking of the actresses…

This is the film which propelled Ling Po, one of the most celebrated Chinese movie actresses ever, into stardom. It was also, as far as I know, her first male role. Due to the popularity of this performance, she was repeatedly cast in male roles in later films, and also starred in the Shaw Brothers version of Mulan.

Having seen this film, I have a clue why she is so beloved. It was very touching to see Liang Shanbo’s reaction to the revelation that Zhu Yingtai is female and wants to marry him. And the most moving scene of all in this film for me was this scene between Liang Shanbo and his mother, and I would give Ivy Ling Po 50% of the credit for this (I would divide the other 50% of the credit between the director and the music composer). More than anything else, Ivy Ling Po convinced me that she was deeply, deeply in love with Zhu Yingtai.

No wonder so many women became fans of this “Brother Liang.”

Now I am going to have to see more Ivy Ling Po films.

By focusing so much on Ivy Ling Po, I don’t mean to slight Betty Loh Ti. She does a fine job performing Zhu Yingtai. Betty Loh Ti was already a star when this film was made, and in shows in the way that the film focuses more on Zhu Yingtai than Liang Shanbo. She was best known as a beauty, but she could also act. While I don’t think her performance had the heart-grabbing sincerity of Ivy Ling Po’s Liang Shanbo, I do appreciate the way she showed how Zhu Yingtai had to subtly balance dropping hints at Liang Shanbo and maintaining her disguise.

I think the genius of the way Li Hanxiang directed this film is that HE WAS NOT SUBTLE. He put tons of obvious metaphors throughout the film (see the beginning of the post, with Liang Shanbo’s merriness cut off by a solemn parade). While Zhu Yingtai and Liang Shanbo are travelling together, having a merry time, there’s lots of calm, beautiful scenery in nice, relaxing sunlight. After Zhu Yingtai and Liang Shanbo have been driven apart, there’s lot of wind, sunset colors, and other not-so-subtle signs that the world has been broken.

Yet it never feels heavy-handed. The point is that it is supposed to feel grander than life, and putting in metaphor after metaphor just drives things deeper into the audiences psyches.

To be honest, I’m not entirely sure what to make of this film. I had never seen any other film quite like it before. Now, I do plan to see more Huangmei opera films, which will probably help.

When I first saw this film, I was rather irritated that they didn’t even try to elope. Yeah, it would have been difficult, but surely it would have sucked less than dying, not to mention that we are dealing with a female protagonist who had the guts to trick her parents into letting her live as a man to study away from home for three years. I would have felt better if they had tried to elope, failed, and then died (at the same time, I know there are cultural reasons why this was less feasible in classical China than in, say, medieval Europe).

But when I saw the film a second time, I got over that irritating business, and was able to more fully enjoy the many wonderful things about this film. It truly is a classic.

Next time: The 8th Bronze Man of Shaolin (manhua)

Note: there will be a 1-week hiatus … the next post will appear on October 29th