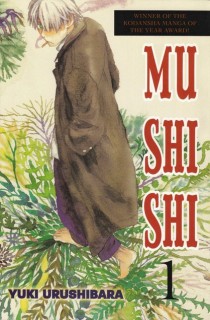 After revisiting and reviewing each volume of Yuki Urushibara’s Mushishi for my horror manga review project, by now it’s probably readily clear that I greatly enjoy the series. I love the influence of traditional Japanese folklore on the stories. I love the manga’s subtle creepinesss. I love the exploration of the relationship between humans and the rest of nature. I love how the series delves into the connections that exist between people. I love the importance placed on the search for knowledge. The storytelling in Mushishi is atmospheric, beautiful, and frequently unsettling as individuals struggle with themselves and with the unknown. There is darkness and tragedy in Mushishi but there is also hope—one of the major themes in the manga is that for better or for worse, life will ultimately persevere.

Mushishi is a largely episodic series following Ginko, a mushishi, who travels the Japanese countryside studying mushi and trying to help people who have fallen under their influence. Mushi are described as creatures which are very close to the original form of life. Their presence is fundamental and necessary to the living world, but depending on the circumstances they may either be beneficial to or negatively impact humans. Mushi are frequently at the heart of unusual natural phenomenon or may cause otherwise unexplainable illnesses. Within the context of the series mushi can be taken literally, but they can also be read as metaphors for many conditions experienced in reality. 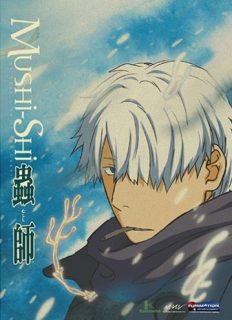 Urushibara’s ten-volume Mushishi, originally serialized in Japan between 1999 and 2008, was first released in print in English by Del Rey Manga between 2007 and 2010. Soon after, Del Rey’s manga imprint was closed and Mushishi subsequently went out of print. Unsurprisingly, the print edition of Mushishi has become increasingly difficult to find over time, but in 2014 Kodansha Comics released the entire series digitally. In addition to earning multiple awards and honors over the course of its publication, Mushishi was also the basis for multiple anime adaptations and a live-action film (most of which are available digitally if not physically in North America), as well as a variety of other media.

The first Mushishi anime series, directed by Hiroshi Nagahama, aired in Japan in 2005 and 2006. At twenty-six episodes, it only adapted a portion of the original manga. (Granted, the manga hadn’t yet been completed at that point.) Since I love the Mushishi manga, it probably doesn’t come as much of a surprise that I love the anime as well. Although the first Mushishi anime adaptation isn’t necessarily my favorite series, or even the anime that means the most to me personally, it is the series that I’ve seen the most number of times; I return to it frequently. Eventually, nearly a decade after the first Mushishi anime series, an animated television special was released which was followed a few months later by a second anime series. This twenty-episode series, also directed Nagahama, aired in Japan between 2014 and 2015 and adapted most of the remaining stories found in the manga. (A second animated television special was released during this time as well.) Despite the number of years that passed between the first and the second anime series, they are both very similar in tone and style. Nagahama also directed the Mushishi animated film released in 2015 which adapted the manga’s final story arc. Since I loved both the original manga and the first anime series, I was very happy to see so much more Mushishi anime produced. 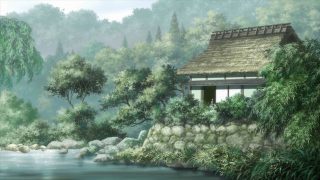 The various Mushishi anime are very faithful adaptations of the manga. Frequently the scenes in the anime follow the scenes in the manga frame by frame and panel by panel, though occasionally the order that events appear in the narrative is slightly altered. Where the anime distinguish themselves is in their color and sound, especially in the establishment of the backgrounds and settings. Urushibara’s color artwork is lovely, but except for the covers of the individual manga volumes, very few examples of it officially appeared in North America. (I imported Urushibara’s 2015 Mushishi artbook which is filled with color illustrations and I adore it.) The anime bring the world of Mushishi to life. While the actual animation can at times be fairly simple and limited, the environments are always absolutely gorgeous and beautiful in their detail. The sound design in the anime adaptations is great, too, adding spectacularly to the overall atmosphere. The music by Toshio Masuda (which I’m constantly listening to) makes extensive use of bells, chimes, and other percussion along with unobtrusive synthesized and acoustic instruments, creating a beautiful soundtrack that is in turns ethereal and dramatic. Much like the original, the Mushishi anime creates an experience that can be calming and soothing as well as unsettling and disturbing. 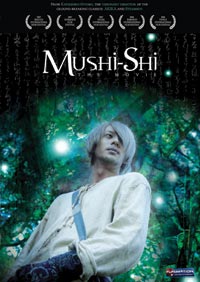 Urushibara’s manga series was also the inspiration for Katsuhiro Otomo’s award-winning 2006 live-action film Mushishi. For the most part the film was received very well both inside and outside of Japan. Though overall it’s palette tends to be darker and more subdued than the anime adaptations, the visuals can be quite stunning; the special effects hold up surprisingly well even a decade after it was first released. I actually only very recently watched Otomo’s Mushishi for the first time. From the standpoint of someone who is very familiar with the original manga and its anime adaptations, the live-action movie is somewhat disorienting and perhaps even shocking. Though it begins much as one would expect, it ultimately deviates a fair amount from its source material even to the point of changing some of the underpinning mythologies and characterizations of the original. It’s clear that Urushibara’s manga provides the basis for the movie, but many details have been reimagined or remixed in some way. The narrative is still interesting, though. Otomo successfully weaves together several stories from the manga series and makes references to many others before taking the film in an entirely new and different direction. While the original Mushishi tends to be episodic, Otomo’s film is self-contained and provides a single cohesive story. In part this is accomplished placing a significant focus on Ginko’s past and what it means for his present and future, providing a framework for the film as a whole. Instead of simply wandering the countryside helping other people, Ginko has the additional motivation of trying to solve the mystery of who he really is and to reclaim his missing memories. 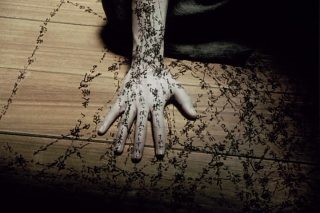 While I would consider the Mushishi manga and anime to be horror, albeit fairly subtle and subdued horror, the film is much more obviously so. Many of the underlying elements are the same, but the film focuses more directly on the aspects of traditional, supernatural horror. However, this does mean some of the more nuanced themes found in the manga and anime are missing. Otomo’s film is a much darker incarnation of Mushishi. The movie, especially towards its end, is incredibly creepy and extraordinarily disconcerting in both imagery and story. It’s so different in tone and narrative that it might actually be better described as a portrayal of an alternate universe of Mushishi rather than being a strict adaptation. It certainly won’t be to everyone’s taste, especially if viewers are expecting something more akin to the gentler (though still disquieting) anime adaptations, but I actually quite liked the movie. For me though, it’s really more of a horror film before it’s a Mushishi film. Still, I feel that the live-action film, the anime adaptations, and the original manga are all well worth checking out and are all fascinating in their own rights. And of course, although unlikely, I’d love to see more Mushishi media and merchandise released in North America.