Gyo: The Death-Stench Creeps is a short, two-volume horror manga series created by Junji Ito. Originally published in Japan in 2002, Gyo has had several English-language releases by Viz Media. It was first translated between 2003 and 2004, a slightly updated second edition was released between 2007 and 2008, and most recently, published in 2015, was the deluxe hardcover omnibus. In addition to Gyo, the omnibus also collects two of Ito’s short horror manga: “The Sad Tale of the Principal Post” and “The Enigma of Amigara Fault.” The deluxe edition of Gyo is very similar in design to the recent omnibus of Ito’s manga Uzumaki; the two volumes look great on the shelf together. Uzumaki was actually my introduction to Ito’s work, and I consider it to be one of the best horror manga that I’ve read. Despite Gyo having been released in English three times, and despite the fact that I’ve been meaning to read more of Ito’s manga, the series’ deluxe omnibus is actually the first that I’ve read since Uzumaki.

While vacationing in Okinawa, Tadashi and his girlfriend Kaori witness the harbinger of what will eventually become a plague overrunning the entirety of Japan—a small, rotting fish walking on land with what appear to be mechanical legs. Accompanying it is an overwhelming and nauseating stench. Soon, countless fish and other sea creatures begin streaming out of the ocean. The only things that they have in common are the bizarre appendages and the sickening smell. Kaori and Tadashi cut their vacation short and return to Tokyo, but Kaori in particular is traumatized by the events in Okinawa and soon the creatures begin to be found in the city as well. No one knows where the walking fish originated or how they evolved; of much greater concern is the death and disease caused by their presence on land. And things are only getting worse with the passage of time. 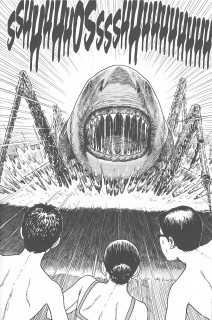 The back cover of the omnibus describes Gyo as Ito’s “creepiest masterpiece of horror manga ever.” Admittedly, some of the artwork in Gyo is fantastically creepy, not to mention gruesome and grotesque. Ito is an extremely skilled illustrator, creating images that are horrifying and nightmare-inducing. And as a whole, Gyo can be exceptionally gross. However, the manga’s story ends up being so utterly ridiculous that I would be hard pressed to call it a masterpiece, especially when compared to his earlier work Uzumaki. Whereas Uzumaki is surreal and bizarre, Gyo is so absurd as to be ludicrous, and only increasingly so as the manga progresses. I simply can’t take Gyo seriously; I can only read the series as a comedy, whether or not it is actually intended as such. The manga is perhaps closer to being a cult classic, which I suppose might make it a masterpiece of a different sort, but that’s something that could be argued either way. If nothing else, though, Gyo is a brilliantly outrageous spectacle.

Gyo is certainly not a manga that will appeal to every reader, even those who are already fans of horror manga. Though disconcerting and disgusting, especially the illustrations, the plot of Gyo is too silly to be truly terrifying. Taken alone, the art is superb, but the ridiculous nature of the story creates a weird disconnect. However, I can’t deny that I was entertained by the progressively over-the-top, illogical, and random developments in the manga: sentient gas, a circus out of the middle of nowhere, characters who are oddly oblivious or overly accepting of what is going on around them, and so on. (Though, it is rather sweet how Tadashi sticks beside Kaori through to the very end.) Assuming that one can find it palatable to begin with, Gyo is a very strange manga that is difficult to look away from as Ito presses further and further into territory that is beyond believing. I kept turning the pages to see just how far he would be able to take things. Gyo may very well be one of those manga that’s so good simply because it’s so bad; whether that’s deliberate or not, I’m not sure.