For over a decade, I would’ve named Guy Gavriel Kay as my favorite author. And yet, I have never reviewed any of his books here. Having failed to love The Last Light of the Sun when I read it back in 2004, I think my enthusiasm for him just waned, and though I bought his subsequent novels, I hadn’t felt particularly compelled to read them. Now, though, I am determined to tackle GGK’s full bibliography, from old favorites that I’ve reread before (like my most-beloved The Lions of Al-Rassan) to one that I somehow only read the once when it came out twenty-plus years ago (A Song for Arbonne) to the newer books I haven’t yet read. But I will start, as is customary, with the very beginning.

When Jordan moved in across the street from me in the late ’80s, she really did influence my life in some significant ways, not the least of which was introducing me to “GGK” through his first series, The Fionavar Tapestry. My love was deep and abiding and, because of that, I definitely had some trepidation about revisiting the trilogy. My genre preferences have evolved over the years, for one thing, and I no longer read as much fantasy as I used to. More, though, I remember this as the first series to make me cry my eyes out. Would it still have the same effect on me after all this time? As it happens, I shouldn’t have worried, because now I apparently get verklempt at the drop of a hat. 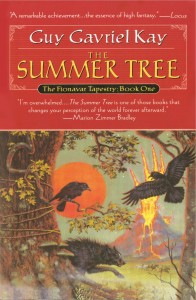 The Summer Tree
We begin with a conference at the University of Toronto where a group of five students is invited to meet afterwards with one of the lecturers. To their surprise, he reveals himself to be a mage named Loren Silvercloak from a world called Fionavar, sent to bring guests from our world to a festival for the High King of Brennin. What he doesn’t reveal, while feeling guilty for the deception, is the fact that Brennin is in turmoil (a punishing and unnatural drought, an ailing and elderly king, the return of some nasty creatures, an evil god imprisoned under a mountain…) and that he feels they are needed there somehow.

The five quickly decide to take Loren up on his offer and the story’s scope widens considerably once they arrive in Fionavar. In addition to meeting one of my favorite fictional characters ever, seemingly frivolous Prince Diarmuid (more on him later), the Canadians are swiftly swept up in events, changed by their experiences as they discover individual destinies even Loren had no inkling of.

Perceptive Kimberly Ford, for example, becomes the new Seer of Brennin, inheriting the knowledge of her predecessor and destined to be the one to call “The Warrior.” Witty Kevin Laine is accepted as part of Diarmuid’s band of men, though there is more to come for him down the road. Paul Schafer is grappling with tremendous guilt after surviving a car accident that killed the woman he loved, yet an experience in Fionavar allows him to finally see that it wasn’t his fault. Emotionally guarded Dave Martyniuk finds a place he belongs among the Dalrei, the nomadic hunters of the plains, and begins to open up to friendship. And Jennifer Lowell, proud and reserved, yet not unkind, is captured by the evil god (Rakoth Maugrim) and mentally and physically violated before Kimberly is able to rescue her.

I admit Jennifer’s fate does trouble me a little. Of the five, she probably receives the least attention in this first installment before undergoing a terrible ordeal at the end. Rakoth has already issued a dramatic proclamation of his freedom and war is at hand by the time her friends learn of her fate, so it’s not as though her rape is solely responsible for spurring them into action, but they are extra motivated because of it. I do still think, though, that this plotline is ultimately about Jennifer and the choices she will make going forward.

Lastly, I’ll note that Guy Gavriel Kay’s writing style might not be for everyone. Occasionally it can be portentous, namedropping legendary figures, and maybe a little too poetic at times, but overall I still love the wistful, languid, and bittersweet feeling of his prose. There’s so much emphasis on what events mean to the characters that I got sniffly over and over again. (I found Dave’s arc especially moving.) At this rate, I will be a puddle by the third book! 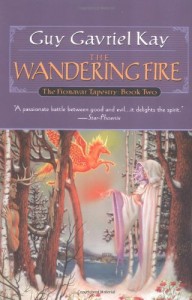 The Wandering Fire
Although there are many important things that happen in The Wandering Fire, I think what I like best is the continuing character development for the five Canadians. This time, it’s Kim whom we don’t see very much of, and that’s honestly fine by me, since she had so much of the focus the first time around. We spend a lot of time with Paul, whose survival of the summer tree has given him the ability to compel the lesser gods of Fionavar, and with Dave and Jennifer, too. (And I am indeed happy to report that she ends the volume much stronger for having endured all that she has been through.) But shining above all of them is Kevin.

After Kim brought them home at the end of The Summer Tree and everyone saw what had been done to Jennifer, Kevin declared, “To this I will make reply, although he be a god and it mean my death.” When they returned to Fionavar, however, and he saw how effective Dave was in battle, how everyone else had something to contribute, he felt terribly useless and bitterly derided himself for his proclamation. And then he accompanies a group on a journey to the territory of Dana, the goddess, to try to discover how Rakoth Maugrim has caused the unnatural winter that plagues Fionavar. There, he awakens to his fate as Liadon, lover and sacrifice to the goddess. It is fitting that when Paul went willingly to the tree, he needed to properly grieve the loss of the woman he had loved, and thus brought rain, and now bright and warm Kevin is the one responsible for bringing spring. It’s not his death that makes me sniffle, but the fact that he found the thing he was meant to do, and struck an enormous blow against the dark in the process. He was very far from useless.

So, too, do I love the reactions of the others to what has happened to Kevin, especially Dave, who mourns Kevin, with whom he never got along in school, to a degree that surprises him. I like to think his grief was colored with regret for so much time wasted when they could’ve been friends. My one complaint, though, is that we never see inside Diarmuid’s head. He liked Kevin, and we can tell he is upset, but we are not privy to his thoughts, nor indeed to the love he evidently discovered he feels toward Sharra, to whom he proposes. Every time Diarmuid does something brilliant and brave, which is often, my heart swells a bit with love of him, but he still remains somewhat of an enigma. The same is true for his brother Aileron, actually. For the most part, we follow the points of view of outsiders.

There’s more sorrow yet to come in the final volume, and I must ready myself to face it. 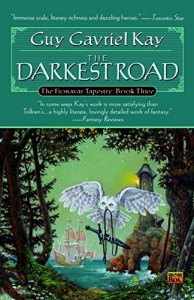 The Darkest Road
In this concluding volume of the trilogy, the armies of the Light and the Dark have their final confrontation. Our heroes taste defeat, bittersweet victory, loss, glory, and pain. I am pretty sure this was the first book to ever make me cry my eyes out over a beloved character’s death, and it did so again this time. Hiding his serious hatred of the Dark under a flippant facade, Diarmuid is the first of two characters to willingly sustain a killing blow in order to deliver one. The way Kay describes this scene playing out is so cinematic, I’m left desperately hoping this’ll be the next fantasy epic to be adapted for television.

Contrasting Diarmuid’s end, where he passes surrounded by loved ones and is given a proper farewell (another vivid image is Aileron, devasted by grief, cradling his brother’s body to his chest as he carries him from the field of battle), poor Darien dies alone and uncomforted in Maugrim’s crumbling fortress, never knowing whether anyone will know what he achieved. Thankfully, they do know and the bravery of his deeds and the choice he made is celebrated in song.

Revisiting this series as an older, more attentive, reader has been an interesting experience. Only at the very, very last do we get a glimpse inside Diarmuid’s head. I doubt younger me even noticed that. Nor, I think, did I notice that alongside the three central Arthurian figures reliving their fate, another takes the part of the Lady of Shalott. Lastly, and most significantly, I have a greater appreciation for the statement Kay is making about free will. Obviously, the roles some characters play are tied to destiny, but the importance of Darien’s freedom to choose between the Light and the Dark is repeatedly emphasized, Paul chose to take the king’s place on the summer tree, Jennifer chose to have Darien and refuses to attempt to influence his decision, Diarmuid chooses to take on an impossible foe, Kim chooses not to conscript an ancient power that would surely have been an advantage, and more. I hope that I will find more to love about Kay’s other works—maybe I’ll even like The Last Light of the Sun more next time!