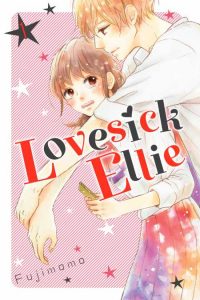 I admit that I was initially attracted to Lovesick Ellie because of the covers, which are adorable. My favorite is the third, because it perfectly captures Ohmi-kun’s personality.

So, imagine you’re an awkward boy who doesn’t express himself well, only you’ve been born exceedingly handsome. You’re placed on a pedestal, and instead of getting to play a tree in the school play, the role of the prince is thrust upon you. At kindergarten graduation you’re completely confused when the girls ambush you for souvenirs and end up in tears. In middle school, you end up alienating your best friend who grows envious of your good fortune and disappointing people when you let your true personality show. That’s the plight facing Akira Ohmi, and when he gets to high school he decides to adopt a princely facade to go along with his looks so that he can keep his distance and avoid hurting anyone else. 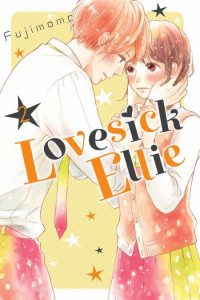 Eriko Ichimura is a plain girl whom nobody notices. (Yes, this is one of those Dessert manga where the friendless girl attracts the notice of the most popular boy in school.) In lieu of real relationships, Eriko entertains herself by writing fantasies about Ohmi-kun on an anonymous Twitter account under the name Lovesick Ellie. One day, she accidentally catches a glimpse of the real Ohmi-kun. Shocked, she leaves her cellphone behind, enabling Ohmi to read her tweets about him. Rather than be mad, he thinks they’re hilarious. In exchange for her keeping his secret, he offers to fulfill her fantasies, then laughs when she’s, like, “Okay!” In the end, he decides to trust her.

After this encounter, they gradually come to know each other. Ohmi is derisive toward the other girls who’ve fallen for the false persona he’s created, but Eriko is different. Not only is she not disappointed by his true personality, she continues to lust after him openly. Ultimately, this is a story about really being seen and loved for your true self. Nobody noticed Eriko until Ohmi did, and while everyone noticed him, they never saw the real him. 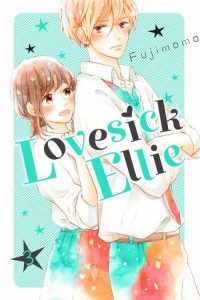 As they navigate their new relationship, there are various firsts, and a lot of blushing, and some misunderstandings, and some mean girls who disapprove of Ohmi dating someone (though they mistakenly think he’s dating Sara, the friend Eriko eventually acquires). None of this is new shoujo manga territory, but the characters are refreshing. Ohmi is seriously endearing, especially once his bratty attitude subsides and he allows himself to be sweet and vulnerable. He’s apologetic for the things he gets wrong, and encourages Eriko not to give up on him. For her part, Eriko is kind of a spaz, but shoujo heroines are not typically this horny, so that’s a unique aspect, for sure. It certainly makes for some snerkworthy declarations, like when she proclaims, “I like you sexually!”

So far, I really like this series a lot, and I look forward to continuing it.

Lovesick Ellie is ongoing in Japan. Its sixth volume comes out there on March 13th, which is the same day the fourth will be available in English.