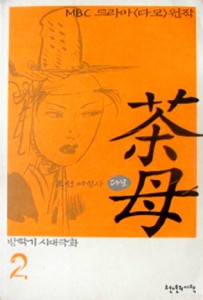 Joseon Female Detective Damo (조선여형사 다모) was originally published as a newspaper or shinmun manhwa in Sports Seoul in 1994. It followed a previous series that the manhwa-ga, Bang Hak-gi (방학기), had published in 1979, called Damo Nam-sun (다모 남순이), which was serialized in Sports Seoul. In 2003, MBC turned Damo into a popular television miniseries, starring Ha Ji-won in the title role. Although the manhwa has not been translated into English, the drama is available for legal viewing in U.S. and Canada by streaming online at Dramafever.

(The first volume is currently out-of-print, which is why my reviews are beginning with the second volume. Fortunately, the drama remained sufficiently faithful to the original story, and the manhwa itself—no doubt due to its original form as a weekly serial—provided enough context to allow the reader to follow along without having read the first volume.)

The word damo (다모 or 茶母) originally indicated a female servant who served tea in government offices. However, by the late Joseon dynasty, the meaning of the term had evolved to refer to female police detectives, who were important for searching and interrogating female suspects in Joseon’s gender-segregated society. Set during the late 17th century, Joseon Female Detective Damo tells the story of one such detective, Chae-ok, who serves under the chief inspector of the Left Police Bureau, Hwangbo Yun.

At the start of the second volume, Chae-ok, who habitually goes disguised as a man, has gone undercover to infiltrate a ring of counterfeiters. With a fellow servant, Ma Chuk-ji, she helps a prisoner named Noh escape from the notoriously well-guarded Seorin jail. Having won Noh’s trust, Chae-ok and Ma Chuk-ji follow him to his hideout, where they realize that the criminal activities go far beyond just counterfeiting money. Noh and his men are illegally smuggling in weapons—specifically Japanese-style swords and guns—suggesting a much more dangerous criminal conspiracy that can only be backed by a high-ranking official. 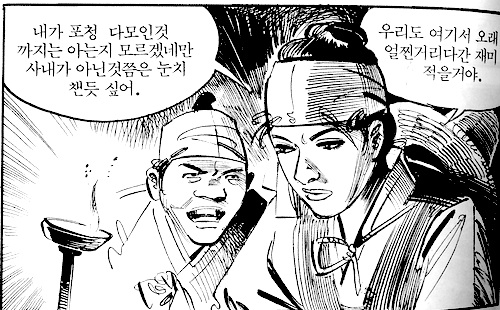 Meanwhile, Chae-ok’s superior, Hwangbo Yun is fired from his position as chief inspector of the Left Police Bureau because of the prison break. However, he has already anticipated his dismissal, which in combination with the infiltration operation, is part of his ambitious plan to promote his government career by exposing a high-profile crime. A flashback shows that Hwangbo Yun is an illegitimate son of a nobleman; due to this status, he was originally barred from civil service and served instead as a low-ranking military officer. (Due to the literati culture of the time, the military was held in lower esteem than the civil bureaucracy. The police bureau on the other hand was considered part of the civil service.) He received his appointment to the Left Police Bureau through a matter of luck: after surviving a murder attempt by his half-brother, the investigation into the crime brings Yun to the attention of the head of the Left Police Bureau, who appoints him to the chief inspector position. However, the appointment also won him many enemies, including Jeong Pil-jun, the Minister of War and the main antagonist of the series. Jeong Pil-jun is the man responsible for Hwangbo Yun’s dismissal, and the Left Police Bureau suspect that he is also behind the counterfeiting and smuggling ring.

Hwangbo Yun on the left, Jeong Pil-jun on the right.

Noh takes Chae-ok and Ma Chuk-ji to the criminals’ mountain stronghold, where they meet the leader, Cheon Seung-gi. They learn that the goal of the conspiracy is revolution: Cheon Seung-gi is gathering dissatisfied commoners and other dissidents and training them into a small army, whose purpose is to overthrow the Yi Joseon dynasty. Their cry is “Justice now!” (a rough translation of “이재궁궁”), a prayer for a better world. Cheon Seung-gi, despite his idealism, has his own dark past, as a former eunuch who is on the run after murdering his adulterous wife. Chae-ok and Ma Chuk-ji must now try to find evidence that conclusively proves that Cheon Seung-gi is taking orders from a government official and uncover that official’s identity. Despite their best efforts, they get nowhere, which leads them to conclude that they have to trick Cheon Seung-gi into revealing his patron. The volume ends as their trap is set, using Ma Chuk-ji’s wife, Tabak-nyeo, to get close to the criminals’ leader.

Although this manhwa is not rated, the dark subject matter, including visual depictions of violence and sex, make it very much a series for adults. (The drama, by comparison, would receive at most a Teen (13+) rating.) While the stylized art prevents the images from seeming explicit, they do represent what in a more realistic style would be very graphic scenes. Although featuring a strong female protagonist in a historical setting sends a feminist message, readers should be warned that the series does contain misogynistic content that goes beyond the sexism of the historical period. In particular, Cheon Seung-gi has a deep-seated hatred of women, and I found the two scenes where he murders women to be disturbing.

These warnings aside, the manhwa depicts the historical period with considerable realism and takes the time to provide background information that is not common knowledge. As the manhwa’s intended audience is supposed to have learned about Korean history in school, it suggests that the manhwa-ga put in considerable time into researching the setting and making the manhwa educational as well as entertaining. (Certainly, the experience of reading this manhwa has drastically expanded my knowledge of historical vocabulary.)

The strength of the manhwa is in its moral ambiguity. While the drama does address the issue of how both sides are in the right, the manhwa takes it one step further and shows how both sides are in the wrong. In this volume, Bang Hak-gi delves into extensive flashbacks for Hwangbo Yun and Cheon Seung-gi, showing past context that is important to understanding both characters. Neither Hwangbo Yun nor Cheon Seung-gi are pillars of virtue, and at times, they are thoroughly dislikable characters. The manhwa takes a sharp and critical look at all the social problems of the era through the lens of a protagonist who, as a woman and as a slave, is at the bottom of the hierarchy and sees the situation most clearly. It is telling that Chae-ok’s weapon of choice in the manhwa is a flail (also known as nunchaku), a commoner’s weapon, rather than the sword wielded by her drama counterpart, and yet she never loses a fight in this volume.

Since Damo is an older series, the art is very different from the more well-known examples of magazine or jabji manhwa. Bang Hak-gi’s style lends itself well to action scenes, drawn with thick, dynamic lines that almost make the characters seem to move on the page: 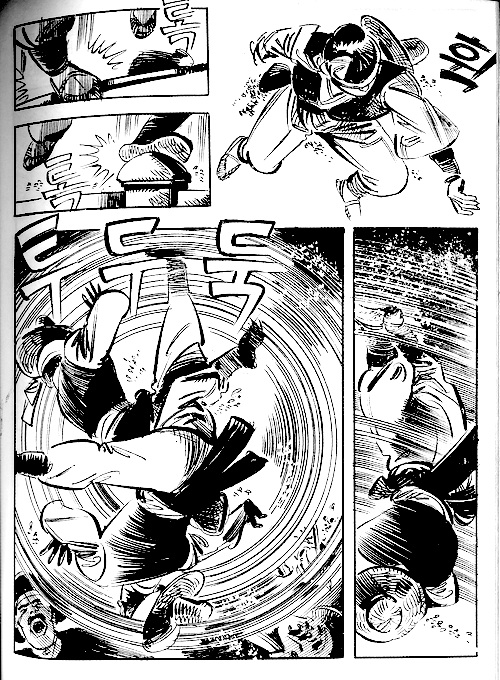 Series of panels where Chae-ok is fighting off pursuers during the prison break with a backflip kick.

While figures and backgrounds are rendered without much detail, the manhwa-ga does pay considerable attention to the form of the bodies in his action scenes and makes good use of the limited space on the page. The faces are often drawn in vivid close-ups, and characters that would otherwise look similar are often distinguished by evoking differences in expression and posture. Also impressive is his ability to render landscapes in a minimal number of lines: 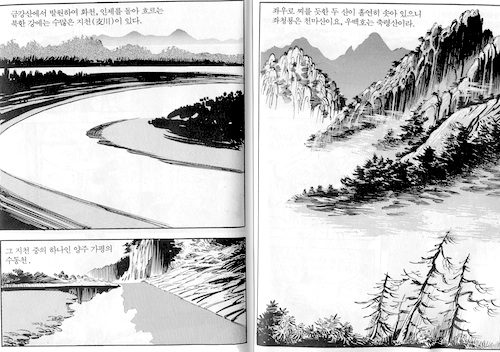 Series of panels depicting a river on the left and a mountain landscape on the right.

As someone who had enjoyed the drama adaptation of this series, I enjoyed this opportunity to read the original manhwa. Despite the familiarity of the story, the manhwa proved to strike a much darker tone and a somewhat cynical perspective in comparison to the drama. The complex and nuanced portrayal of the characters grabbed my attention and made me curious to find out what happens next after the cliffhanger ending of this volume. For readers who are interested in historical crime stories with a generous side of political intrigue and martial arts action, Joseon Female Detective Damo will be a perfect fit.