Midnight Stranger is the third boys’ love manga and the first series by Bohra Naono to be released in English. Naono’s first manga to be translated was Yokai’s Hunger which was initially released in print by Media Blasters but is now available digitally through Sublime Manga, the boys’ love line associated with Viz Media. Sublime also released Naono’s second manga in translation, Three Wolves Mountain, which along with Norikazu Akira’s Honey Darling was actually one of the publishers’ debut titles. Midnight Stranger is a short, two-volume series, the first of which was published in Japan in 2013. In English, Midnight Stranger, Volume 1 was released by Sublime in 2016. Like Naono’s other translated manga, Midnight Stranger has strong supernatural elements which can be fun but rather peculiar, a fair amount of comedy, and Naono’s penchant for older men. I’ve enjoyed Naono’s work in the past, so I was very glad to have the opportunity to receive a copy of the first volume of Midnight Stranger for review.

Midnight Stranger, Volume 1 contains two major storylines which aren’t directly related to each other but which could conceivably take place in the same setting. The volume opens with the titular “Midnight Stranger” and its followup chapter “Love-Hate” which are about Roitschaggata, a minor goat spirit, and Xiuhtecuhtli, an old and powerful god of fire. (The two are also the focus of the volume’s bonus chapter, “The Point of a Day Off.”) Centuries ago, due to the ugliness of his original form, Roi was mistaken for a monster rather than the benevolent spirit of healing that he is. He was nearly burned alive by a mob of humans, but was saved and granted more appealing looks by Xiu. The two of them now live together in modern-day Japan—Roi utterly devoted to his god, and Xiu oddly fond and possessive of his adoring servant. The second storyline collected in Midnight Stranger, and the basis for the four-panel comics included at the volume’s end, is “Hollow Romance,” a manga about a seemingly innocent young man named Takara Mori who is both more and less than he seems and the literal demons surrounding him. 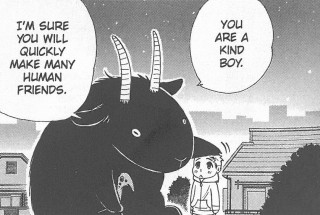 Although I’ve somewhat come to expect it from Naono’s manga, the supernatural aspects of Midnight Stranger are all over the place and the worldbuilding isn’t necessarily cohesive. Xiu is based on an Aztec deity, Roi I believe is inspired by Swiss traditions, “Hollow Romance” incorporates Nordic legends, and there is a variety of other mythological beings present in the manga as well. It’s never really explicitly explained why all of these deities, demons, spirits, and legends from vastly different cultures and geographies are interacting with one another, but clearly in Midnight Stranger gods and beliefs aren’t restricted by countries or borders. The unexpected combinations, while seemingly haphazard, can be surprisingly entertaining, though. But while Naono has taken inspiration from multiples sources, which is something that I enjoy about her work, her interpretations are very much her own and frequently very little of the original tales remain. Xiu, for example, retains his name and has an appropriately fiery temper and flashy personality, but otherwise his connection to Mesoamerica is largely nonexistent.

Humor is also prominent in Midnight Stranger, though in tone the manga does shift between comedic and ominous. Granted, there is plenty to find amusing or ridiculous in Midnight Stranger, such as Xiu making his living in the mortal world as an idol or Roi gaining a young boy he cured as a best friend and confidant. Roi is actually the source of quite a bit of the humor in Midnight Stranger. He has a complex about his appearance, not realizing how adorable his new goat form is or how attractive he is as a human. He’s also apparently a little slow in recognizing that Xiu has feelings for him—readers aren’t privy to the hundreds of years of the extremely tedious evolution of their relationship, just the time period in which Roi finally figures it out and the heated sex that follows. Whereas Roi and Xiu’s story becomes more comedic as it progresses, Naono takes the opposite approach with “Hollow Romance” which becomes increasingly darker and grotesque, all while still maintaining a sense of humor. I particularly liked “Hollow Romance,” but I am curious to see what lies in store for Roi and Xiu in the next volume of Midnight Stranger.

Thank you to Viz Media for providing a copy of Midnight Stranger, Volume 1 for review.

Two reviews, and some big news! First up was my review of Blade of the Immortal, Volume 24: Massacre by Hiroaki Samura. As you might suspect from the title, it’s a rather bloody volume. It also features what I think is one of the best visually executed battles in the series. I also reviewed Yukio Mishima’s novel Forbidden Colors which is a bit twisted but extremely engrossing and very good. Like his earlier novel Confessions of a Mask, it deals with homosexual themes and includes autobiographical elements.

As for the big news! Over the weekend Experiments in Manga celebrated it’s third anniversary and I wrote quite a lengthy post about it. If you don’t feel like reading the whole thing, here’s the really important bit: I am delighted to announce that in the very near future Experiments in Manga will be joining the Manga Bookshelf network of blogs!

I was traveling quite a bit last week (a couple of my friends were getting married), so I’m a little out of touch when it comes to some of the most recent manga news. However, there is one thing that I want to be sure to pass along. I personally don’t read much manga digitally, but Organization of Anti-Social Geniuses has a fantastic post looking at all the legal ways to read digital manga in 2013.

Math Girls Manga, Volume 1 written by Hiroshi Yuki and illustrated by Mika Hisaka. Based on the Math Girls series of novels, the manga focuses a little more on the romance and a little less on the math, but it still can teach a thing or two about it. Unfortunately, errors slipped into the English edition and some of the mathematical symbols are missing. Seeing as Math Girls is about, well, math, this is somewhat problematic. But if you can ignore that, Math Girls is a rather delightful and charming manga. Math lovers in particular will appreciate it, but as with the novels it’s possible to skip over the math-intensive sections and just enjoy the story. I wouldn’t mind seeing more of the Math Girls manga, but I suspect there won’t be another volume released anytime soon.

Three Wolves Mountain by Bohra Naono. So far, only two of Naono’s manga have been released in English. Yokai’s Hunger largely frustrated me but I thoroughly enjoyed Three Wolves Mountain; it’s easily my favorite manga out of the two. It’s an odd mix of comedy, drama, and the supernatural, but Naono makes it work this time. Kaya Susugi is a cafe owner by day and a grave keeper by night who ends up taking in Tarou and Jiro Tsukihara, two werewolf brothers. Susugi is used to being alone but becomes very close with both of the brothers, but especially with Jiro who has fallen in love with him. I wasn’t expecting Three Wolves Mountain to become such a family affair, but parents, siblings, and even cousins all have their role to play in the story. Three Wolves Mountain is great stuff.