There were two reviews at Experiments in Manga last week in addition to the announcement of the Mecha Manga Giveaway Winner, which also includes a list of some of the mecha manga that has been licensed in English at one point or another. (Considering how many have been released in English, it’s not a comprehensive list. Instead it focuses on some favorites.) As for the reviews, I recently read Fuyumi Ono’s The Twelve Kingdoms, Volume 4: Skies of Dawn. Sadly, this was the last volume in the series to be translated into English. The Twelve Kingdoms is a great series of fantasy novels, all of which are worth tracking down. Keeping with last week’s unintentional theme of reviewing fourth volumes of epic series, I also took a look at Vinland Saga, Omnibus 4 by Makoto Yukimura. Vinland Saga is one of my favorite manga series currently being released and this volume hasn’t changed that.

The phenomenal Sparkler Monthly is currently running a membership drive for its second year, and there are some fantastic incentives. I highly recommend checking the project out and contributing if you’re able. Lori at Manga Xanadu has a nice post looking back at the first year of Sparkler Monthly and looking forward to Sparkler Monthly Year Two. For some of my own reviews and random musings on the excellent content being released by Sparkler Monthly, check out the Chromatic Press tag. (Actually, I’ll be posting a review of Denise Schroeder’s Before You Go later this week, too.)

Elsewhere online, ICv2 has a two-part interview with Viz Media’s Leyla Aker and Kevin Hamric looking at What’s Selling, Where, and Why as well as focusing On Specific Products and Programs. Justin at Organization Anti-Social Geniuses has a fun post about The Curious Case of Last Pages For US Manga Editions. Also, Mangabrog has translated some of Takehiko Inoue’s interviews from back when Vagabond was on hiatus.

Black Rose Alice, Volume 1 by Setona Mizushiro. I’ll admit, even though I have enjoyed the other manga by Mizushiro that I have read and despite the very good things that I’ve heard about Black Rose Alice, I was still a little hesitant to read the series. Mostly because I’ve become a little weary, and therefore wary, of vampire stories. But the vampires in Black Rose Alice are so different that I’m actually hesitant to even call them vampires. Either way, the first volume was phenomenal. It’s creepy and disconcerting, tragic and chilling. Dimitri is a rising star, an operatic tenor with a beautiful voice and a handsome face who is astounded when a stranger tells him he is to blame for a sudden wave of suicides. The deaths in the story have tremendous emotional impact, which is particularly impressive since the characters have just been introduced. The characterization in Black Rose Alice is excellent, especially that of Dimitri, and the artwork is lovely and atmospheric. I am a little sad to see early 20th-century Vienna already left behind as a setting in exchange for modern-day Tokyo, but I’m very curious to see where the story goes from here. I’ll definitely be picking up more of Black Rose Alice.

Blank Slate, Volumes 1-2 by Aya Kanno. I first read Blank Slate several years ago and recall really liking it. Upon rereading, it’s honestly not as good as I remember it being, though the art is pretty great. Even considering the flaws in its execution, I actually still really like the series. Apparently the story that Kanno originally planned was much longer and more complicated. Quite a few things changed plot-wise as well as character-wise when she shortened the series; the transition isn’t as smooth as it could have been. Blank Slate would have benefited from at least another volume or two so that all of the backstory that’s crammed into the second volume could have been more fully developed. Though in its way it is thrilling, there are so many plot twists and major reveals towards the series’ end that it’s almost absurd. Some of the characters are shown to be so different from who they were when they were first introduced that it’s almost difficult to believe the changes, but that does make their betrayals rather effective. And I do like that the completely amoral and nearly emotionless Zen, the series lead, remains a villain throughout despite a tragic past that is supposed to make him more sympathetic. 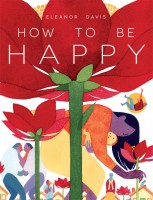 How to Be Happy by Eleanor Davis. I wasn’t previously familiar with Davis’ work, but after experiencing How to Be Happy I certainly want to read more of it. How to Be Happy is a collection of her short comics, some no longer than a page. Though her black and white illustrations are effective, Davis’ color work is especially striking. She exhibits a wide variety of styles in How to Be Happy, evoking a number of different moods. However, all of the comics come across as being at least a little surreal. Many, perhaps most, of the stories tend towards the melancholy and somber, but others have an underlying and almost hidden sense of humor and joy. As Davis points out in her author’s note, the book actually isn’t about how to be happy. And yet, I found reading the volume to be a wonderfully cathartic and thought-provoking experience. I would even go as far as to call it inspiring. Though she often employees fantastical elements, what Davis really seems to be doing in How to Be Happy is exploring the nature of life and reality through her short narratives. How to Be Happy is a beautiful, strange, and wondrous collection and one that I can definitely see myself returning to again.

Midaresomenishi: A Tale of Samurai Love by Kazuma Kodaka. Although Midaresomenishi is self-described as a romantic epic, there’s not very much at all that is romantic about this boys’ love manga. Instead it’s an extremely dark tale with a focus on violence, sexual and otherwise. Truly terrible things happen in it. Blood, death, and sadism take precedence over affection and love. There is very little happiness to be found in Midaresomenishi, and what little there is is fleeting. Shirou is a young samurai who takes great pleasure in killing, but that is nothing in comparison to the joy that Sougetsu, a powerful and decadent master of bandits, takes in sexually dominating others. In order to protect the life of his younger brother Fujimura, Shirou allows himself to be subjugated by Sougetsu. What he doesn’t realize is that while Fujimura is alive, he has become a sexual plaything for Sougetsu’s underlings. There actually is some doomed love and strong familial bonds in Midaresomenishi, but for the most part the manga’s focus is on the more unpleasant relationships. Midaresomenishi doesn’t work for me as a love story, there’s simply too much force and coercion, but as a violent tragedy it is fairly successful.