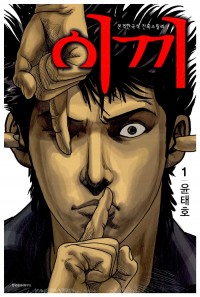 The winners list of the Reader Awards for best manhwa of 2010 has been posted online, and I’ve provided an English translation of the winners.

First place: Moss (이끼) by Yun Tae-ho
A horror/psychological thriller manhwa originally published as a webtoon and adapted into a live-action movie that was released last year. It was briefly reviewed in An introduction to Korean webcomics. (Aladin)

Second place: 2010 Sound of My Heart (2010 마음의 소리) by Jo Seok
A comedy featuring a protagonist with a bizarre personality and originally published on Naver as a very popular webtoon. (Aladin)

Third place: Let’s Fight, Monster! (싸우자 귀신아!) by Im In-seu
A supernatural manhwa about a girl who can see monsters. Like the above two series, it was also originally published as a webtoon. (Aladin)

Third Place: The Unbiased Fairytale (실질객관동화) by Invincible Pink
As the title suggests, a revisionist retelling of fairy tales, with satirical commentary about the morals they teach. Yet another webtoon that was originally published on Naver. (Aladin)

First Place: Gourmet (식객) by Heo Yeong-man
Bestselling manhwa series about a chef by one of the most well-known manhwa-ga and adapted into a television drama as well as two movies. (Aladin)

Second Place: Castella Recipe (카스텔라 레시피) by MASA+PnH
A fantasy manhwa series about the adventures of a new student at a magic academy. (Aladin)

First Place: With the Gods (신과 함께) by Ju Ho-min
A Naver webtoon about a man undergoing judgment in the afterlife and a man haunting this world as a ghost after his death. (Aladin)

Second Place: Cheese in the Trap (치즈인더트랩) by Sun-kki
A Naver webtoon about a college student and her relationship with a mysterious upperclassman. (Naver)

Third Place: Welcome to Room 305 (어서오세요. 305호에.) by Wanan
A Naver webtoon about two roommates and their everyday lives. (Naver)

First Place: Yongsan Where I Lived (내가 살던 용산) by various
Six manhwa-ga produced six stories about the everyday lives of people now passed away, based on stories from their families. (Aladin)

Third Place: Nothing to Cry About*** (울기엔 좀 애매한) by Choi Gyu-seok
A slice-of-life manhwa about the hardships and struggles of a working-class man who does not deserve his bad luck but bears it with good grace. (Aladin)

Translation Notes:
* I translated this title as Fortune because the title is meant to be wordplay on the English word “fortune” while the hanja characters given mean “to embrace the heavens”. (↑)
** The summary suggests that the full name of the school is “Gangwondo Special High School”—Gangwondo being a province of South Korea—but I left it untranslated in its abbreviated form as “Gangteuk”. (↑)
*** My translation of the title is not quite correct, as the nuance is “I haven’t done anything wrong to cry about.” (↑)