By Anashin | Published by Kodansha Comics 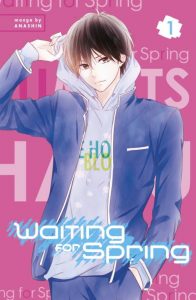 Mitsuki Haruno is a first-year in high school who has always had trouble making friends. Her luck begins to change when she befriends the most popular quartet of boys in school. If someone read those sentences to me and asked me to guess in which magazine this manga was serialized, I’d say Dessert, based on past offerings we’ve seen from them (like Say I Love You.). And I would be right.

The fact that it’s a familiar premise doesn’t preclude Waiting for Spring from being enjoyable, however. Although the four boys can be almost instantly categorized into standard roles based on their appearance—the playful one, the intellectual one, the hotheaded one, the princely one—I appreciated that, like typical teenage boys, they are still occasionally jerks. Oh, sure, they’re idealized and do things like try to cheer up little kids through the power of basketball, but at least they’re not saints. 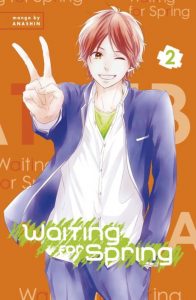 I also quite liked Mitsuki as a character. I could foresee a version of this story in which her failures to initiate social interaction with others might be frustrating, but that’s not the case here at all. The key seems to be Mitsuki’s honesty about the past experiences that are holding her back in the present, and by the end of the third volume she has made two female friends. Reina is, awesomely, a major fujoshi and envisions the four boys (all of whom are on the basketball team) in romantic pairings. I love the little background gags of her taking surreptitious pictures of them. Maki is a member of the girls basketball team who, unbeknownst to Mitsuki, also has a thing for princely Asakura.

We also meet Aya, the childhood friend whom Mitsuki thought was a girl. Turns out (no real surprise) that he is a boy and is determined to win Mitsuki’s affections. He’s insistent to a troubling degree, but again, I appreciate that Mitsuki is firm in her refusals, even managing to defuse conflict between Aya and Asakura by proposing that she’ll go on the date Aya wants after the inter-high tournament, but that Asakura will come too and it’ll be a fun group thing. I get that we’re supposed to appreciate how much Aya’s friendship meant to Mitsuki when she was young, given that she had no other friends, but I wonder… are readers really supposed to like this guy? At least his presence spurs Asakura (generally sleepy and/or oblivious) to realize what his feelings for Mitsuki are. 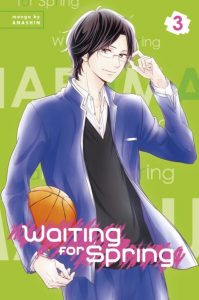 But will he act on those feelings? The boys on the basketball team are not allowed to date. I did find it strange that although these boys talk about how much basketball means to them, because this is shoujo manga, we see sadly little of it. In volume three, the inter-high preliminaries have begun and in the space of 1.5 pages, the boys have won five games. I know this isn’t a sports manga, but c’mon… I’d like to see more than that! Another thing to appreciate about Mitsuki is that, while many of the team’s other female fans are just there to look at the cute boys, she understands how important the game is to Asakura and overcomes her shyness and orchestrate a cheering section when they fall behind during a practice game. Too, I greatly appreciate that she hasn’t had to deal with any mean girls warning her away from the boys. (Reina’s occasional “grr” reactions at girls hanging around them are enough.)

So, yes, this is a low-key series that isn’t breaking any new ground. That said, I still like it. The sweet moments between Mitsuki and Asakura take me back to adolescence when the first time you hold hands with someone is a tremendously big deal and the art style is attractive. The conclusion seems pretty obvious already, but I expect I’ll enjoy getting there all the same.

Waiting for Spring is ongoing in Japan, where it is up to eight volumes. Three volumes are currently out in English, with the fourth scheduled for release next week.

Well, it was a very quiet week at Experiments in Manga last week. I was hoping to post my review of the first omnibus of Takako Shimura’s Sweet Blue Flowers, but a variety of things came up–little dude’s preschool open house, helping family members with their cross-country move, spending most of a day on the road for an out-of-state taiko performance, to name just a few. But never fear! I’ll almost certainly be posting the review later this week instead. I haven’t been online much recently either, but I did catch a couple of thing of interest last week. The first was an announcement from Dark Horse, which will be releasing Kentaro Miura’s official Berserk guidebook in March of next year. The second was Brigid Alverson’s discussion with Akira Himekawa, the two-person creative team behind most of the manga adaptations of The Legend of Zelda.

Goodnight Punpun, Omnibus 6-7 (equivalent to Volumes 11-13) by Inio Asano. It feels like it’s been forever since I’ve read the fifth omnibus of Goodnight Punpun, but in reality it’s only been a few months. Perhaps it seems so long since Goodnight Punpun can be such a hard-hitting, exhausting experience which requires time to fully recover between volumes. (At least, that tends to be the case for me.) Goodnight Punpun is a surreal and extremely dark coming-of-age story. The series is intense, easily earning its explicit content warning with the manga’s portrayal of emotional, psychological, and physical violence. But while much of Goodnight Punpun is incredibly bleak, there are also moments of hope. Granted, that hope can also be extremely painful. Goodnight Punpun worked best for me when it was exploring the inner turmoil of its titular protagonist. I was actually frequently reminded of Osamu Dazai’s No Longer Human as the series approached its conclusion. The manga’s second major plot involving the cult wasn’t nearly as compelling or convincing, coming across as superfluous and tangential to me. But having now reached the end of Goodnight Punpun, I find that I want to read it again. The manga has multiple layers to it and I’m fairly certain there are elements that I either missed entirely or didn’t fully appreciate my first time through the series.

Waiting for Spring, Volume 1 by Anashin. Although the basic premise of Waiting for Spring makes it seem like the manga’s setup could easily slip into a reverse harem territory, after reading the first volume I don’t think that’s the direction Anashin will be taking with the series. However, it does still look like there will be at least some romantic rivalry involved. If there’s one thing that Mitsuki wants from high school, it’s to finally make some friends. She’s having a difficult time of it, though. The other young women in her class aren’t really hostile towards her, but she hasn’t been able to really connect with them, either. But things start to change when she gets mixed up with and is unexpectedly befriended by the four stars of the men’s basketball team. In general, most of the relationships in Waiting for Spring are very well done. The blossoming romance between Mitsuki and one of the basketball players is very sweet, but I’m particularly enjoying the friendships in the first volume. Mitsuki treats all of the guys like they’re real people. She isn’t blinded by their good looks and athletic talent (though she can still appreciate them) and doesn’t hesitate to give them what for when needed. This is actually something of a novelty for them, but it’s what allows their friendships with her to naturally develop. The already well-established relationships between the four young men are also very entertaining.

Attack on Titan Adventure: Year 850: Last Stand at Wall Rose written by Tomoyuki Fujinami and illustrated by Ryosuke Fuji and Toru Yoshii. Growing up, I was a huge fan of the Choose Your Own Adventure series and other types of gamebooks. (I’ve even held onto a few particularly well-loved volumes from my youth.) And so I was very curious about Last Stand at Wall Rose, an interactive novel set during the Battle of Trost which takes place early on in Hajime Isayama’s original Attack on Titan manga. The mechanics of Last Stand at Wall Rose are interesting, incorporating elements of roleplaying games. Since I’m used to standard branching-plot stories, the book wasn’t as linear as I was expecting and in some ways was even more interactive than I thought it would be. Keeping pencil and paper nearby while reading can be very useful. Last Stand at Wall Rose was fun, but I did find some of the formatting and gameplay to be annoying. The most egregious issue was the amount of unnecessary flipping of pages which made the narrative more disjointed than it otherwise would have been. I also almost wish that page numbers hadn’t been included since the novel’s navigation is based on a system of independently numbered story sections rather than pages. (Also of note: Readers of the first printing of Last Stand at Wall Rose will want to refer to the errata posted online.)