I was very much on the fence about this title when I heard it announced. The idea of a boring but overpowered lead is not new to the world – see One-Punch Man for the most obvious example – but whether the title succeeds or not is very much dependent on the surrounding cast and situations. In this regard Least Interesting Master Swordsman does a fairly good job. The cast is hefty, especially for a first volume, with a kingdom with four noble families, several princesses, several isekai’d heroes, and any number of magic powers and romantic back and forth. Contrasting all of this is our hero, Sansui, who not only has been practicing with his wooden sword for so long that he’s unbeatable but also has been living for so long that he no longer has the desire to eat, drink, or get romantically involved with anyone. All this is fine. The problem is that for the majority of the story, Sansui is also the narrator, and his tone is just as dry and boring as his swordsmanship. 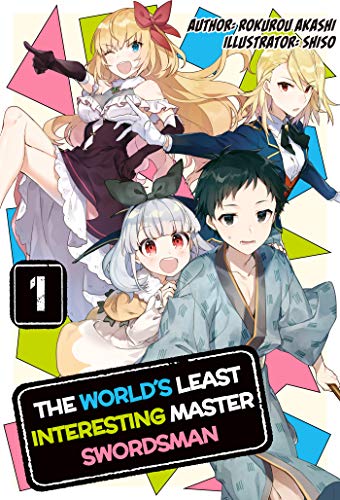 Sansui is, as so many of these stories begin with, a typical Japanese boy accidentally killed by God – his name is sort of the equivalent of Amos for North American countries, and therefore God thought he was old and killed him. As an apology, he’s sent to another world, and offered the choice to get insanely strong, which he happily takes up. Unfortunately, his teacher teaching the sword just has him doing practice swings. And, as he’s immortal, he does them a long time. After five hundred years, he’s got nothing more to learn, and also comes across a baby about to be eaten by wild animals, so heads towards the civilization (with baby). Years later, he and his adorable adopted daughter are living with the House of Sepaeda, with him serving as the bodyguard to its spoiled princess Douve, alongside Blois, her bodyguard and attendant, who has a crush on Sansui. They head off to the Magical Academy, and the plot comes with them…

Sometimes this book feels like I’m reading an isekai from the POV of the villain’s party. Sansui is relatively nice, but he’s so monotone it doesn’t come off well, and he will happily kill people if his mistress asks him to. Douve is pretty awful, seemingly doing anything as long as she’s entertained, but fortunately this makes her fun to read rather than annoying. There’s a 2nd cast that’s meant to read as “the normal isekai party”, with a Japanese guy with superpowers (who loses to Sansui over and over, of course) and his harem of princess, foreign princess, and cursed princess. They contrast nicely with Sansui, and when the narrative voice switches to one of them the book comes alive a bit more, not a good sign. As for Sansui, he doesn’t really get aroused anymore after 500 years, and his reaction to Blois can be summed up as “OK, whatever”, but he at least doesn’t reject her.

Again, there’s a lot to like here – the plot is pretty good, and there are some funny lines throughout. It just feels lugubrious when Sansui is narrating everything as if he’s reading his grocery list, and it took me a while to plow though. I’ll read another, but I hope he gets a bit more interesting.