By Jougi Shiraishi and Azure. Released in Japan as “Majo no Tabitabi” by GA Novels. Released in North America by Yen On. Translated by Nicole Wilder.

It did not escape my notice, when reading the first volume of Wandering Witch, that the best stories in it were the ones that focused on Elaina and her past rather than the ‘Elaina arrives at a strange town’ stories. Sadly, there is no more backstory here, just the wandering witch. Which should be fine. It’s why we picked up the series, after all. Look at the over! It’s the witch, smiling, drinking a cup of tea. This should be a relaxing, slow life series with a nice mix of humorous and serious stories. Unfortunately, I seem to have caught the author of a bad day. They admit as much in the afterword, where it’s noted how dark and tragic many of the stories in this book were. Indeed, one story was cut from the book for being too dark, which boggles my mind. Now, it’s possible that the next volume may try to counterbalance that. But that still leaves Wandering Witch with a problem: the people in this book are terrible. 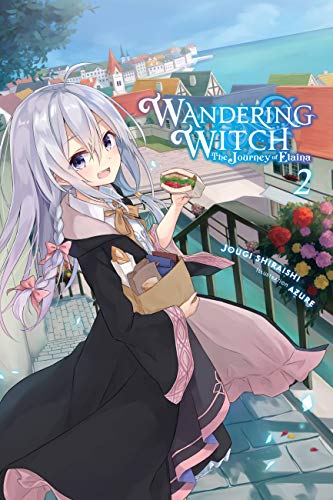 Most of the stories here are short, with two or three longer ones that have a bit more emotional heft. Elaina goes to a country where prejudice against non-magic users runs rampant; stops a war between two villages; tracks down a runaway princess; starts a fashion trend; deals with a beast girl with a tragic past (the best story in the book, even if it was as much fun to read as a root canal); helps a man find his father’s inheritance; goes to a country where truth is magically enforced; has interaction with a bomb manufacturer; discovers her old teacher has written a book; goes to a country where laziness seems to be the norm; goes to a fake zombie town now infested by real zombies; tries to hide the truth from some happy-go-lucky hunters; and deals with a country where you had better love cats – or else.

As you can see, these sound exactly like the peaceful, slow life sort of stories you’d expect here. The trouble is the characterization. The people in these stories are bigots, shallow, greedy, slothful, and sometimes genuinely evil. Even the nicest stories deal with what might best be described as misguided fools. If Kino’s Journey has a running theme of ‘war is horrible’, Wandering Witch’s might be ‘people are awful’. Sometimes there’s karmic fate, but more often than not nothing really happens except Elaina leaves and goes to the next town. The very first story upset me in particular as Elaina sees that the non-magic using people in this town are being persecuted and literally called animals, but merely disapproves of this and leaves. She’s meant to be rather emotionally deadened, but it just ends up seeming incredibly callous. This also makes it harder with stories like the beast girl one, where Elaina is supposed to be genuinely moved and upset – it seems fake because of how we’ve seen her before. Also, her “that girl – it was me” narrative joke isn’t funny and makes her sound smug.

I’d heard that future volumes of this leaned on the yuri a bit, but I’m not sure how good it’s going to be. Saya, the girl from the first story of the first volume, shows up again and clearly has a massive crush on Elaina, but it’s unreciprocated. Moreover, one of the stories involves a romance between two women, but it ends up being treated like more of a punchline than anything else. More to the point, after this second volume, I simply don’t want to read anything more about this witch and her journeys. Which is fine. I’m sure if told that I was dropping her series, she’d simply shrug and move on to the next town filled with selfish, irritating people.

By Jougi Shiraishi and Azure. Released in Japan as “Majo no Tabitabi” by GA Novels. Released in North America by Yen On. Translated by Nicole Wilder.

I suspected going in, judging by the blurb, that this would be less a light novel and more of a short story collection, and I was mostly correct. Elaina is our protagonist, and we do learn bits and pieces about her as the book goes on, but it’s clear the main thrust of the series is “Elaina goes to [X], events happen, Elaina leaves [X]. Which is fine, as some of the stories are quite good. The publisher did a good job not just giving in and calling it “Elaina’s Journey”, because yes, this does remind the reader of a certain motorcycle-riding protagonist we all know. Elaina’s short stories are less concerned with a moral than Kino’s, though – in fact, some of the weaker stories in this book come from when it does seem to try to awkwardly hammer home a “deep down we’re all the same” sort of lesson to be learned. Fortunately, Elaina is not really the sort to take in valuable lessons. She just wants to walk around. 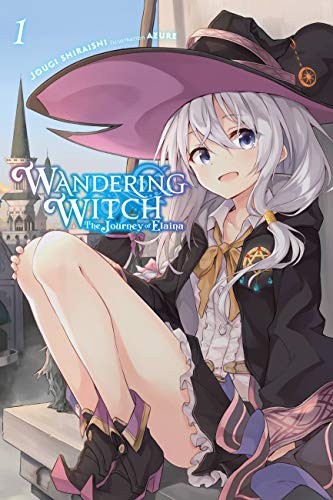 As the title implies, Elaina is a young witch who is wandering around her world, which is one where witches are known and tolerated in most countries, visiting cities, towns and villages to take in what they’re like. As she does this, some of the places she goes are very entertaining and funny; some are rather creepy and horrific; and some are designed to tell us more about Elaina herself – in both flashbacks and the present day – to show us how she got to be a witch and why she’s so dedicated to wandering around and not staying longer than three days (again, does this sound familiar, Kino fans?). The supporting cast is pretty much zero; there is a recurring gag about a muscle-headed brother searching for his sister that pops up a few times, but that’s less for the character development and more for the gag.

Elaina herself is somewhat dry and frosty; at times the book can feel like a tsukkomi wandering the world of bokes. She used to be worse – one of the better stories involves us meeting her teacher when Elaina was an apprentice, and having the arrogance stripped out of her. Now she’s helpful… sometimes despite herself… but still seems removed from events, never getting too emotionally involved. Several stories here do not have happy endings, or end on a sad or scary note; we see Elaina leaving the country on her broom and never looking back. In the final story of the book, where the present-day Elaina meets her old teacher, there are hints that there’s more to Elaina than meets the eye (I’m curious about her mom as well), and I suspect we may find out she’s more important than she makes herself out to be.

As you’d expect given the format, the book is quite variable; some stories hit hard, some miss entirely. And, as I’ve hinted in the review, you do get the sense that the publisher would have been better off just license rescuing Kino’s Journey instead. But Wandering Witch is certainly an interesting journey in the end, and I enjoy Elaina’s matter-of-fact, slightly smug narrative voice. I’ll be looking for more of this.