This is a highly enjoyable volume of Unnamed Memory, although the story placement felt very odd. I joked when I was halfway through the book that I’d reached the end and the other 150 pages would just be light music. That’s because the story that covers the first part of the novel feels very much like a climax, the sort of thing you’d have to wrap things up with a bang. Instead, after that blockbuster we get a few lighter in tone short stories of varying length, followed by another longer story for the last fifth or so that gets serious and dramatic once again. Fortunately the stories all read well, and at its core the book is about the relationship between impulsive, outgoing Oscar and cool and calculating (except when it comes to Oscar) Tinasha. We’re still in the time promised in their contract, but that time is rapidly coming to a close. Can Oscar win her over? Will he even be able to, given her own past and the threats of other witches? 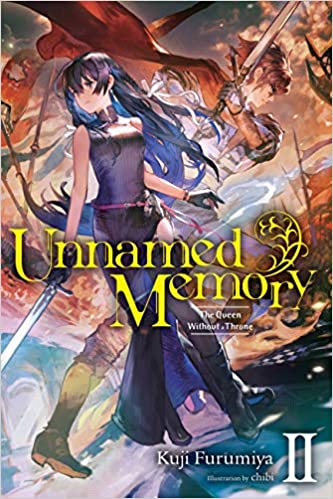 The book starts off in a disturbing fashion, as our heroes find a wannabe mage who killed most of a family and imprisoned their souls in daggers. This leads indirectly into the main plot of the first half, as Tinasha abandons Oscar after meeting a man from her past long thought dead – Lanak, who wants her back… well, “wants’ may given him more agency than he really has here. What’s worse, as this happens, towns across the land are having everyone in them suddenly vanish – seemingly dead. Is Tinasha behind this? Has she gone to the dark side? (No. Come on, you guessed that.) After this crisis, Tinasha fights a kraken, shows Oscar a very pretty lagoon, battles against time to stop her getting hit by an aphrodisiac, watches Oscar go behind her back to stop a brothel that allegedly uses a song that can kill you, and, in the last, more serious story, fights a god.

As with the first book, the novel’s main strength is that it lacks any of the gimmicks that light novels are littered with today. It’s a simple fantasy, with no one from Japan, no game worlds or stats, and none of the usual anime shtick. I particularly liked the story about the killer song (clearly, I suspect, meant to be based around the song “Gloomy Sunday”, which has indeed been banned a few times for supposedly making people suicidal) as it has more than one good fakeout, and also gives us a chance to see Tinasha at her most furious. She and Oscar are clearly a great couple, and he knows it, and I think she does too, but it’s going to take a lot more to get her to actually commit to it than what we have now. She does NOT want to be tied down that closely. Still, when you trust a man enough to disembowel you in the most careful way possible, that’s a keeper.

The third book ends with a brief cliffhanger showing us one of the witches is working to destroy the bond between Oscar and Tinasha, which should not be surprising – there are five witches for a reason – but also makes me wonder if the next book will actually feature their contract running out at last. In any case, those bored with isekai and harems should definitely add this to their must-read list.

By Kuji Furumiya and Chibi. Released in Japan by Dengeki Bunko. Released in North America by Yen On. Translated by Sarah Tangney.

It has become increasingly rare in the Japanese light novel world to find a straightforward novel that can be called “fantasy”. Oh, the light novel market is riddled with fantasy novels, to the point where, 3-4 years ago, having anything licensed with non-supernatural content was a huge surprise. But they’re not the sort of fantasy I mean. Either they’re all based around game mechanics, or they’re literally trapped in a game-style worlds. And then there’s the Infinite Isekais, be it reincarnated souls or just “I was in my classroom and now I have a sword and three hot young girls” sorts. But there is something to be said for simply having a normal fantasy. Magic has rules, yes, but they aren’t the rules of Casting from MP. Our hero has a curse, but it’s not draining his HP bar. And that’s what we’re getting with Unnamed Memory, the story of a prince with a curse and the witch who’s trying to break it, and also the story of how the two of them are made for each other, even if she’s not admitting it yet. 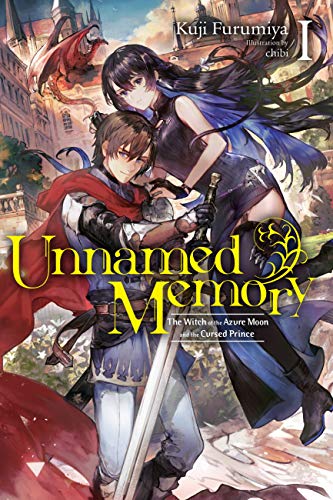 Prince Oscar is our hero, and he has a curse: a witch cursed his family when he was a boy so that any woman who had his child would die. Now 20 years old and one of the strongest in his kingdom, he goes to another witch, rumored to grant any wish to those who can climb to the top of her tower, and ask her to break the curse. That said, once he meets the witch, Tinasha, he has a better idea: she can marry him, as witches are strong enough to break this curse. She refuses to do that, but she does agree to spend the next year with him at the castle, at first as the “witch’s apprentice” and then, once her cover is blown, out in the open. Over the course of the book they solve mysteries, defeat ancient evils, fend off threats from other countries, and banter. The banter is the reason to read the book.

First up, I will say I wish that we’d had a bit more depth to Oscar at first. We get to know him a bit better as the book goes on, but at first I trusted him about as much as Tinasha does, and it’s easy to see why she brushes off his constant attempts to get her to marry him. Tinasha fares slightly better, although her past is also mostly suggested in this first book. There’s also a couple of unpleasant scenes, one being a dream – brought on by the drug of another witch – which leads to him having to strangle Tinasha, a rather ugly solution I thought could be handled differently, as well as one attempted assault on her when Oscar gets jealous. I mention these as the things I didn’t enjoy, mostly because the rest of the book is otherwise excellent. A very good supporting cast, some cool battle scenes, and the interplay between the main cast is very well done indeed. The book reads smoothly and makes you want more.

So I wasn’t over the moon with it, and I think I need another book or two to like Oscar as much as the author wants me to, but otherwise I can see why this was one of the most anticipated LNs of the year. Especially recommended for those tired of the usual game stats light novels – this has none of that.